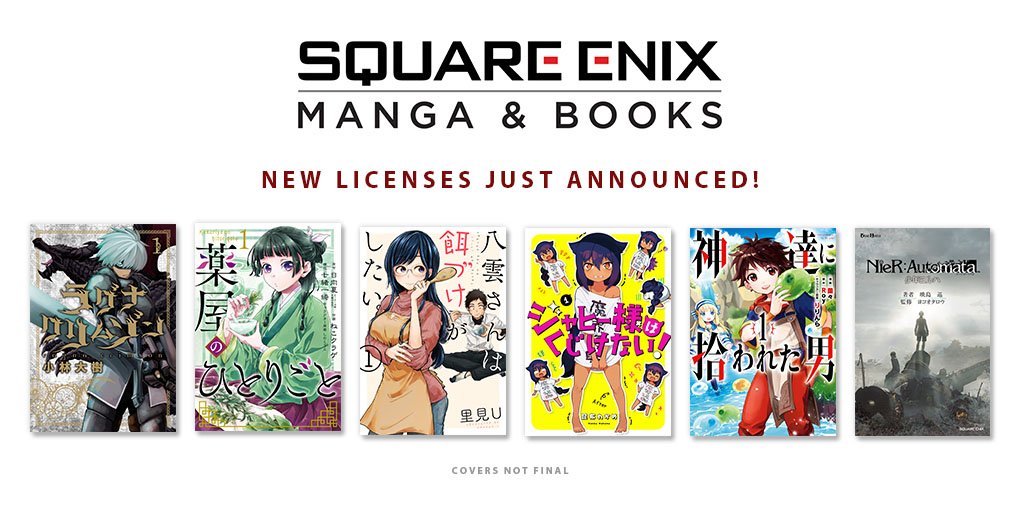 
Square Enix held a heavy presence at this year’s AnimeNYC event, and during their panel, at AnimeNYC they announced six brand new titles for their manga and books imprint that are sure to please readers of all kinds.

Here are the announced titles:

In this action-packed dark fantasy, humanity lives under the threat of annihilation by immensely powerful dragons. The dragon hunter Ragna embarks on a revenge-fueled quest to eliminate that threat once and for all!

Also arriving in 2020 is The Apothecary Diaries. Story by Natsu Hyuuga, with art by Nekokurage, composition by Itsuki Nanao, and character design by Touco Shino.

After breaking a “curse” on the imperial heirs, a palace servant with training in herbal medicine is promoted up the ranks to food taster…and right into the thick of palace intrigue!

Arriving September 2020 is The Great Jahy Will Not Be Defeated! by Konbu Wakame.

Puny and powerless after an unfortunate encounter with a magical girl, the Dark Realm’s Number Two has her work cut out for her in the world of humans!

Arriving October 2020 is Beauty and the Feast by Satomi U.

A boy with a bottomless stomach and a lonely widow with room at her dinner table serve up a heaping helping of secret happiness in this delightful foodie rom-com!

The action picks up in October 2020 with NieR:Automata – YoHRa Boys by Jun Eishima, with supervision by NieR:Automata game director YOKO TARO.

NieR:Automata – YoHRa Boys is set in the same universe of the hit video game NieR:Automata, and will feature artwork by Final Fantasy illustrator Toshiyuki Itahana

Arriving in November 2020 is By the Grace of the Gods. Story by Roy, art by Ranran, and character design by Ririnra.

Slime’s up for one recently deceased middle-aged businessman! When the gods reincarnate him in another world as a boy with magical powers, he discovers that magically tamed slime are an untapped natural resource!