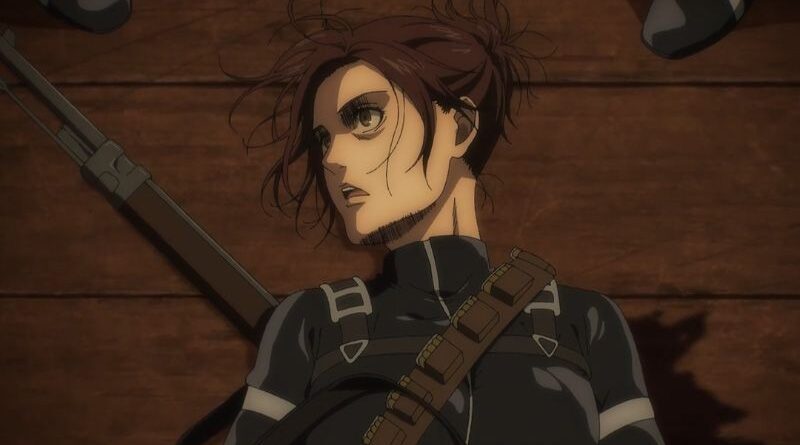 Attack on Titan fans were not emotionally prepared for the death of Sasha Braus in this week’s episode of the final season. While many manga readers spent the past week hinting at that Sasha’s death. Those who respect the anime-only fans enough went without spoiling her death until the episode finally aired in the U.S.

Attack on Titan’s final season has been nothing short of an emotional roller coaster ride. And whether you are cheering for Eren or are now against him. It’s needless to say that Attack on Titan has managed to cement its place as one of the all-time greats even more with how wildly insane this season has been. I’ve been reviewing Attack on Titan week to week and seeing things unfold has been a thrill and while I have now switched over to also reading the manga and knowing that Sasha was to meet her end this week, I couldn’t help fighting back tears of sadness for our favorite potato girl.

To recap, last week we saw Eren take on Galliard and the Jaw Titan and while Pieck and the Cart Titan briefly got the upper hand, that advantage was quickly diminished at the hands of Armin who destroyed Marley’s port along with its fleet. As well as Sasha who’s been a keen sharpshooter these past few weeks. That gave the Scouts an upper hand and helped nearly kill Pieck and the Cart Titan entirely.

After successfully using the Jaw Titan to break Lara Tybur out of the chrysalis she created, Eren consumes her and is now in possession of both the Founding Titan and the War Hammer Titan along with his own Attack Titan. It goes without saying that Eren Jaeger is a formidable foe in all aspects of the word.

The key takeaway from this episode is the revelation that Zeke has been working with Eren and the Eldians of Paradis Island this entire time. Not only that, Zeke never informed Marley that he was an Eldian of royal blood (his mother being Dina Fritz). So despite “betraying” his mother and father (Dina Fritz and Grisha Jaeger), he completed the mission he was tasked with at such a young age. Now it gets a little muddy depending on how you truly look at it but that’s another topic for another post or a deep dive in our Anime in the Basement podcast series.

We also learn that the Scouts have lost all faith and trust in Eren as he has now changed and his sense of morality is highly questionable. Despite the Scouts following through with Erens plans it’s evident they weren’t all in agreement with the card Eren was playing.

This is made clear by Levi who attacks Eren and shackles him as soon as he’s brought on the blimp. It’s also made clear how his friendships have changed when Eren and Armin exchange looks and they both give each other a rather unsettling stare that cements that something has changed in their friendship. Even going back to last week’s episode and if you read my review, I mentioned that once Armin sees the destruction he has caused as the Colossal Titan. He still shows empathy and a sense of sadness for the lives he has now taken.

Although not as cold as Erwin Smith, Armin manages to prove that he has what it takes to complete said mission even if the end doesn’t justify the means. Something Hange mentions to him last week. This week, Hange also shows how much she’s come to disagree with Eren and his change of demeanor and morale as he seems to always lead the Scouts to their deaths.

While most of it at the beginning at least was unintentional and it was all done for the most part to protect him and Paradis Island entirely. The Scouts no longer see it that way. In a sense, Eren has become a sort of leader to the Scouts but has also become the Scouts’ biggest detriment. As Eren has just as much of his people’s blood on his hands now and his enemies once did. Including Sasha’s.

But that’s the great thing about Attack on Titan as a whole. The constant questioning of morality. The constant question of who’s right and who’s wrong? Does the end really justify the means? Was it worth beginning the cycle anew as Gabi is now a new version of Eren? Wanting to kill the people who killed the in her home, the people she loved and cared for.

Now that the dust has settled a bit and The Scouts now have Gabi and Falco captive. Things will now be taking an interesting turn for everyone. As someone who NOW knows what’s coming later on, I’m excited to see these events animated and to see how the rest of the fandom reacts to these events as more secrets will be revealed and Eren Jaeger takes a turn for what many will consider the worst.

Make sure to check back every single week for my weekly reviews of Attack on Titan: The Final Season and if you aren’t caught up on Attack on Titan you can stream the entire series on Hulu, Funimation, and Crunchyroll.