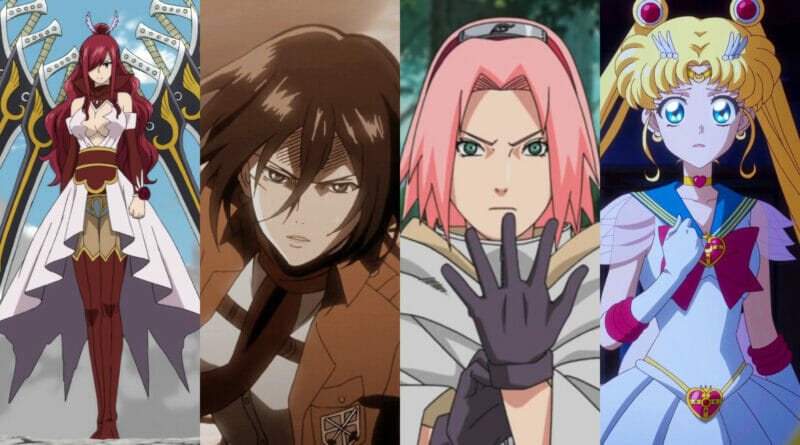 
Female characters in anime are often the highlight of said series whether that is being the best girl, best waifu, best antagonist, or best protagonist. Needless to say in some way shape or form, all of them are some of the most badass women in anime!

As we near the end of March, we celebrate women all over the world and how we have shattered norms and rewritten protocol for us. Let us reflect on the different strong female characters in a variety of different genres. There are thousands of anime that have female leads and some are definitely worth mentioning and honoring.

First I feel we need to honor one of the first animes with a strong female lead. Usagi Tsukino from Sailor Moon was one of many first for many people, true there aren’t guns, swords, or much gore, but it was how many women were represented when the anime first came out in 1991. And without this pathfinder, there probably wouldn’t be many of the modern strong female protagonists we know and love today.

When in the face of adversity, she trusted herself and turned to those she loved to help give her strength. She tries to see the good in her enemies and believes everyone deserves love. At first, she was seen as an immature, lazy, and dramatic girl, but once in a fight, her morals helped her find another way to heal her enemies rather than kill them. Her kindness and trusting nature helped her mature into a capable woman and fighter for the series. Often uses herself as a shield for her friends, she does her best to protect those she holds close to her heart.

Naruto is one of the oldest fan favorites anime since its release in 2002 and has a number of strong female characters. But none have more character development than Sakura Haruno. During her initial introduction, she was completely useless. She didn’t have a traumatic past or rough childhood much like her teammates Naruto and Sasuke which I believe feeds her naivety of the world. Only there to impress her crush, Sasuke, and to try and catch his attention; when put in true danger, she barely did anything to her teammates.

Her “inner self” helped with confidence but other than that, she truly had no idea how to defend herself or others. It wasn’t until true hardship and danger came their way did she overcome it, and proved to herself and those around her that she could be just as tough and just as fierce as her comrades. She continued to push herself and get stronger because she didn’t want to depend on anyone protecting her, but wanted to help protect others.

And she did just that, after training for so long, she proved herself a capable warrior and protector. Her skills developed as a healer for the wounded and a fighter for enemies, and Sakura wanted to be more than what she was, she dedicated herself to the fight and overcame the obstacles to become a powerful shinobi.

Erza Scarlet from Fairy Tail is the most gorgeous and badass character and she knows it too. Other guild members fear her wrath if they act out of turn or behave badly, as she is a strict person who has short patience for people. However, due to her tragic childhood and upbringing, Erza has a huge sense of justice and pride. Tossed aside when a magic experiment went wrong with her mother, Erza grew up an orphan on the streets. While trying to help another child escape a cult, she herself was enslaved and forced to work for a cult and build a tower.

Erza had to learn to fight and defend herself and her “family” of kidnapped orphans and learned how to use her magic from a friendly elder. Her magic abilities allow her to handle a variety of different swords at different times and also have different looks to her outfits. She is not shy or bashful when it comes to her body, she is confident and does not hide how she looks. (With a body like hers, who would blame her?)

Through trials and tribulations, Erza became one of the strongest and fiercest members of the guild, but she also did not let her past define her. She could have turned evil and allowed her thirst for revenge to blind her, but she carried on and became stronger for it.

One of my personal favorites is Yuuki Asuna from Sword Art Online. One of the 10,000 trapped in the video game world of Sword Art Online. She quickly rose through the ranks of the Knight of the Blood guild. Often mistaken as a small and fragile girl, she proves everyone wrong with her quick and direct attacks. At first, when she was trapped in the game, she didn’t care if she died but soon after meeting Kirito, her outlook on life changed and she then fought to help everyone she could to escape the game and free herself as well.

Although she lived a comfortable life in the real world, she was not snobby nor otherwise full of herself. Asuna was strong and kind and even a brilliant cook in the game. The initial shock in the game was enough to make anyone go mad and even seclude themselves as Asuna did. Sometimes we need that friend to whip us into shape and that’s what helped Asuna. She became one of the game’s strongest fighters to clear the floors and protect those she loved.

The last, but certainly not forgotten female character we will look at is Mikasa Ackerman from Attack on Titan. Since its release in 2013, it’s drawn a huge fanbase, and all will simultaneously agree, Mikasa is queen. She is tough, strong, loyal, and hella scary at times. At first, raised in a quaint and loving home, Mikasa realized her strength when she was kidnapped and nearly sold into slavery by traffickers. Her saying “the world is cruel” helped her pop her bubble of safety and security.

She is a vicious warrior and protects those around her to the best of her ability, most notably Eren Jaeger. She has the ability to put aside her feelings for the fight and is constantly on the offensive. She does not flinch in the face of a terrifying Titan and does not hesitate to attack a Titan on sight. She is careful, skilled, tactful, precise, and can get back up when knocked down.

The women in this list are but a few of the strong leads or supporting cast of the anime world and we all agree they are queens of their own definition and often surpass the very word itself. We celebrate and eagerly watch the future for more badass queens to grace our screens and for us to cheer on!