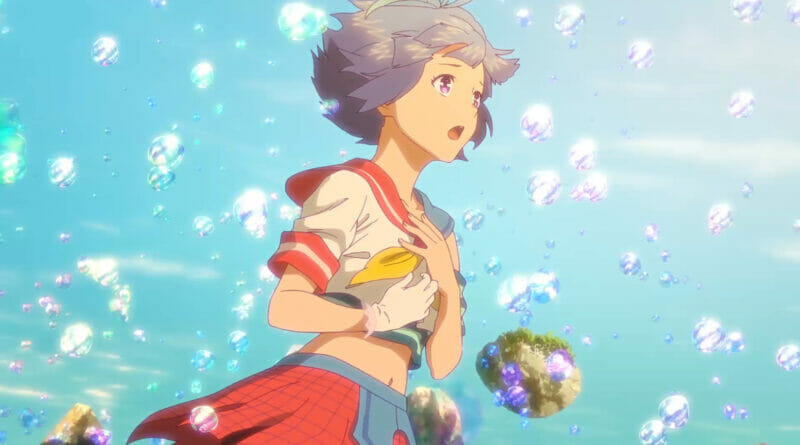 ‘Bubble’ Anime Film Review: This Bubble Has Been Busted

Packed with an amazing voice cast, stellar animation, and a colorful palette, WIT Studio’s latest anime venture, ‘Bubble’ bursts before it can even take flight. Animation in anime films or series can only take you so far, when it comes to ‘Bubble’ that’s where the film starts and ends. Mixing gravity-defying parkour action with WIT Studio’s visually appealing visuals and animation, the film looked like it would deliver a spectacular death game-like story with engaging action sequences.

However, the film ultimately delivers less than spectacular parkour action and hollow characters falling under typical anime tropes with very little explanation of the matter at hand, all while masquerading the film’s focal point as a variation of the classic tale, The Little Mermaid, something we’ve seen done with other anime films before.

‘Bubble’ follows the Hibiki and his Battlekour group from Tokyo, Japan who have been orphaned and enclosed in this giant bubble after the global Bubble Fall Phenomenon. The phenomenon sinks nearly all of Japan, leaving a landscape that can only be traversed through parkour and boats. These orphans engage in parkour battles dubbed Battlekour, in which the winning team takes all of the losing team’s possessions like food and water.

Hibiki, our main character is a mild-mannered, introverted teen who has auditory hypersensitivity and is the only person inside this bubble that can hear the music that emanates from within this bubble. One night Hibiki goes out to clear his mind and falls into the ocean that resides within the bubble, only to be saved by a mysterious bubble that turns into a mermaid-like figure but ultimately transforms into a teenage girl.

After spending some time together, this mysterious girl which Hibiki names Uta, learns about the Little Mermaid tale, learns about space and the planets, and learns how to speak English, then goes on to masterfully know how to parkour without any proper training. This is a dangerous sport, something the film goes out of its way to make point of during its opening Battlekour sequence.

Later on, we learn about the connection between Hibiki and Uta and how she’s been connected to him since he was a child. Revealing that Uta (while in her bubble form) called out to Hibiki, and due to his auditory hypersensitivity, he was the only one who was able to hear her. After that connection is made, the bubbles seen during the Bubble Fall Phenomenon, attack Hibiki causing a massive flood and engulfing Tokyo in the giant bubble which Hibiki inhabits today.

The film does have some underlying tones of wanting to be heard and briefly touches on the disability that is auditory hypersensitivity but doesn’t go much deeper than that. It rather focuses on the tale as old as time that is The Little Mermaid to cover up its failed sense of direction.

Lacking any real explanation for the Bubble Fall Phenomenon other than its unknown origins, and providing no real explanation as to why Uta was the only bubble out of millions to call to Hibiki as a child and again later on as a teenager. Coupled with the lack of explanation of the outside government influencing these Battlekour games, the film truly gets lost, blows up, and bursts before it can truly provide anything meaningful and truly impactful.

By the time the film climaxes, we are expected to care for Uta’s resolve and disappearance which has affected Hibiki emotionally. Looking at it from a surface level, it seems impactful but put it under a microscope, and really ask the questions that the film wants you to ask, you are left wondering, what was this all for? Where were we going with this? Were our characters truly in peril or just looking to make the most out of their horrendous circumstances?

Even in the film’s closing moments, we see that the flood has now receded, citizens are back in Tokyo and the city is starting to rebuild. But Hibiki and company are still parkouring throughout the city. Does it again beg the question? What was the point of the whole ordeal?

If there’s anything working in favor of this film that will get you to watch it is the film’s beautiful animation which shines throughout. The film provides multiple freeze frames so we can appreciate the animation and character designs which do go a long way and elevates the viewing experience however, from a storytelling standpoint it is as hollow as the bubble it is showcasing.

Bubble is streaming now on Netflix.