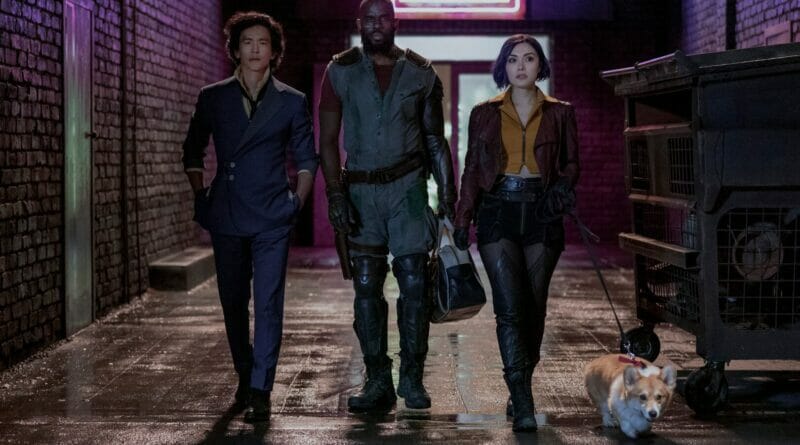 
Alright, 3…2…1…Let’s Jam! If you’ve been waiting as long as us for Netflix to give us an actual look at their upcoming live-action Cowboy Bebop adaptation the day has finally come. Today Netflix gave the world the first official look at the cast of Cowboy Bebop along with the official synopsis for the series. Cowboy Bebop stars John Cho as Spike Spiegel, Mustafa Shakir as Jet Black, Daniella Pineda as Faye Valentine, and Alex Hassell as Vicious.

Production on Cowboy Bebop began in October 2019 but was halted shortly into its production schedule due to John Cho suffering an injury on set. John Cho required immediate surgery and physical rehabilitation for nine months before filming on the series was able to resume. Back in May 2019, we got an update on the series from the series showrunner Marty Adelstein who at the time revealed that only three out of the ten episodes of this first season were filmed.

It wasn’t until June of this year during Netflix’s Geeked Week that we got another update on the series which gave us a sneak peek at the leading cast members getting ready for some interviews while jamming out to the iconic Cowboy Bebop theme song “Tank!” by the Seatbelts and Tim Jensen. The official images for Cowboy Bebop and its cast can be seen below along with the official synopsis.

COWBOY BEBOP is an action-packed space Western about three bounty hunters, aka “cowboys,” all trying to outrun the past. As different as they are deadly, Spike Spiegel (John Cho), Jet Black (Mustafa Shakir), and Faye Valentine (Daniella Pineda) form a scrappy, snarky crew ready to hunt down the solar system’s most dangerous criminals — for the right price. But they can only kick and quip their way out of so many scuffles before their pasts finally catch up with them.

GEOFF STULTS (He/Him) (Little Fires Everywhere, 12 Strong) as Chalmers – Chalmers is the epitome of a Western lawman. He is also Jet Black’s former co-detective in the ISSP’s Homicide Division. He wears a chronic smile that makes you want to punch him square in the face… especially Jet. And that’s only partly because Chalmers is dating his ex-wife these days.

TAMARA TUNIE (She/Her) (Black Earth Rising, Dietland) as Ana – Ana is the proprietor of the hottest underground bluesy jazz club on Mars. And while she acts as a surrogate mom to Spike, there is nothing warm and cuddly about her. Cool and intense, Ana is definitely not a woman to be trifled with.

MASON ALEXANDER PARK (They/Them) (Hedwig and the Angry Inch National Broadway Tour) as Gren – Gren is Ana’s right-hand person. They run the front of the house for Ana’s jazz club. As capable with their wit as a Glock, as confident in a dress as a suit, they are a Bowie-esque embodiment of 22nd century handsome and seductive beauty.

RACHEL HOUSE (She/Her) (Thor Ragnarok, Soul) as Mao – Mao is the Capo of the Syndicate’s “White Tigers” family. Despite, or perhaps because of, her blue-collar background, Mao is more cunning, adept, crafty, and deadly than her counterparts.

ANN TRUONG (She/Her) (Strikeback!, Hard Target 2) and HOA XUANDE (He/Him) (Ronny Chieng: International Student, Top of the Lake) as Shin & Lin. Dressed to kill (because they do), Shin and Lin serve as Vicious’ twin Syndicate henchman. Despite being fearful of their volatile boss, they are fiercely loyal to Vicious in his quest (for reasons we have yet to understand) to take down Spike Spiegel.