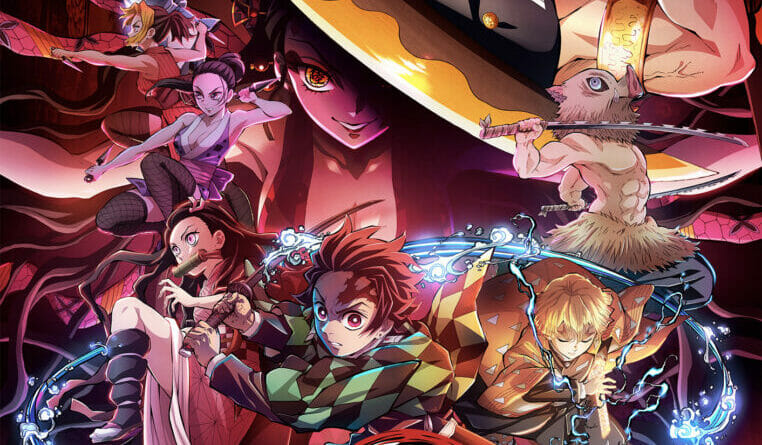 Demon Slayer: Kimetsu No Yaiba has finally entered its Entertainment District Arc with a hefty hour-long premiere. Following the events of the Mugen Train Arc. Tanjiro, Inosuke, and Zenitsu are still reeling from their encounter with both a Lower and Upper Moon Rank Demon. Both were sent to kill not just Tanjiro, Inosuke, and Zenitsu, but the Flame Hashira, Rengoku as well. Our heroic trio is still grieving the loss of their superior Demon Slayer but returns to the Butterfly Mansion to recover from their wounds.

Although not fully recovered from his severe stomach injury, Tanjiro sets off to meet with Rengoku’s brother, Senjuro; as well as their father who has information regarding the Hinomaki Kagura due to his studies on previous Flame Hashiras. While there, Tanjiro and Senjuro try to find a moment of solace with their respective grief towards Rengoku until his father interrupts. Drowning his sorrows and grief with Saki. Belligerent and angry, Senjuro’s father badmouths his own son, Rengoku; something Tanjiro doesn’t take lightly. Defending Rengoku’s name, Tanjiro gets into an altercation with Rengoku’s father.

Tanjiro’s reaction to this revelation is as expected as he only knows of the Hinokami Kagura as a simple ceremonial dance his father did while he was a little kid. Not only did this not turn out to just be a simple ceremonial dance, but also a Total Concentration technique Tanjiro was able to use while fighting Rui and also during his battle with Enmu, and again for a brief moment when launching his sword towards Akaza after he fleed from the battle with Rengoku. But mostly because they were simple charcoal sellers and nothing more than your average family.

In addition to learning about the origins of the Sun Breathing technique, Senjuro informs Tanjiro about how he and his brother Rengoku were raised by their father after their mother passed away. But also reveals to Tanjiro that their father was also a former Hashira in the Demon Slayer Corps. While Rengoku followed his father’s footsteps, Senjuro will not be able to do the same because he was unable to master his swords skills, thus his Nichirin sword was unable to change color for him thus further propelling him down that path of becoming a member of the Demon Slayer Corps.

Tanjiro also learns about the Flame Hashira Chronicles book which chronicles stories, techniques, and history of all prior Flame Breathing technique users. But when Senjuro hands him the book so Tanjiro can learn more about Sun Breathing and its connection to the Hinomaki Kagura, the pages inside the book are partially shredded making the information within it unreadable. After delivering Rengoku’s message to Senjuro, Senjuro also delivers the message Rengoku left behind for their father.

It’s a moment that really cements what Rengoku has always said about his father and his downward spiral after their mother has passed away. He’s become cold, bitter, and angry. He’s dealing with survivor’s guilt, with not just his late wife but now his late son. Rengoku’s final words proved to him that no matter how bad he treated his children, especially Rengoku, he was always loved and cared for by Rengoku. This revelation not only stops him from taking another sip of Saki but also allows him to fully let out all of his pent-up emotions.

After Tanjiro deals with this task he heads back to the Butterfly Mansion to regroup and train with Inosuke and Zenitsu. They each go on about their own missions and eventually make their way back to the Butterfly Mansion and meet the Sound Hashira Tengen Uzui who is in the middle of trying to take Aoi on a demon hunting mission. After much convincing from Tanjiro, Inosuke, and Zenitsu, and the rest of the girls at the mansion; Tengen agrees to take our demon-slaying trio on this mission in Aoi’s place.

Tengen Uzui briefly debriefs Tanjiro, Inosuke, and Zenitsu about the Entertainment District and the demons that reside there. Here we get our first look at the new opening for the second half of this season which gives us a better look at the Entertainment District and the demons who reside within it. This opening also gives us our first look action-packed look at Tengen Uzui in action.

Overall, Demon Slayer: Kimetsy No Yaiba’s Entertainment District Arc is off to a great start. We could’ve done without the recap of the final battle between Akaza and Rengoku since that was literally last week’s episode and we have an entire movie that we can rewatch over and over again. The removal of this recap could’ve lent a hand on giving us more with Tengen, Tanjiro, and company heading to the Entertainment District rather than having to wait a week to see them get there. However, that is a huge nitpick for an episode that felt like another Demon Slayer feature film and was rather engaging for its entirety.