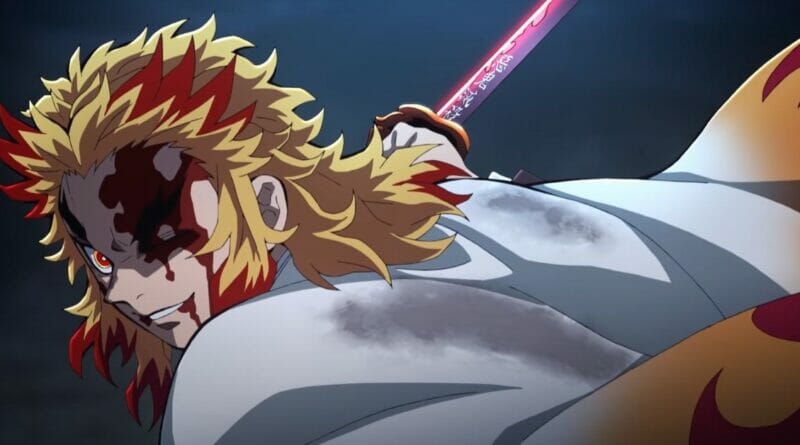 
Demon Slayer: Mugen Train’s visual prowess sends you on a thrilling train ride of emotions with a memorable soundtrack and epic battles

Demon Slayer has been having a stellar couple of years after its anime debut back in 2019. While some anime fans have spent countless hours debating whether or not the Demon Slayer story is good enough to generate the hype it has generated (especially after winning Anime of the Year at the 2019 Crunchyroll Anime Awards). One thing is for sure, that no matter which side of the coin you land on, Demon Slayer’s animation and the soundtrack has truly elevated the watching experience and that’s all thanks to Ufotable.

Ufotable is back again helming the anime feature film debut of Demon Slayer: Mugen Train. After becoming a box office blockbuster in its native Japan. Aniplex USA in partnership with Funimation brought the film over to the west and exclusively to North American theaters. Despite the ongoing pandemic Demon Slayer has found the same box office success here in America that it has found overseas in Japan and rightfully so.

The choice to give Demon Slayer an anime feature adaptation of the Mugen Train Arc as opposed to adapting it into the series second season was at first, a questionable decision. That’s until we got an explanation as to why the decision was made. Demon Slayer’s Mugen Train Arc when combined together runs for a volume’s worth of the series manga so adapting it into an episodic format wouldn’t have done it justice and after watching the film I agree with the decision 100%.

As many Demon Slayer manga readers and anime, viewers know, Demon Slayer: Mugen Train is an arc that focuses majorly on the Flame Hashira Kyojuro Rengoku as he sets off on a mission on the Mugen Train (Infinity Train) to search for the people who have gone missing while riding this train and to stop the demon(s) behind the cause. Tanjiro comes into play and part of this fight against the demons due to being tasked to seek some information on the Hinokami Kagura technique from the Flame Hashira, Rengoku who’s now aboard the Mugen Train.

The great thing about this film is that it wastes little to no time in getting the plot of the film going. While it does leave out some minor moments from the manga or switches up the order of events in which they happen. Once the going gets going there’s almost little to no stopping the adrenaline rush that ensues. Even the slower parts where we sit back and see these false dreams play out. Your heartstrings are tugged and you’re left fighting back emotions because you know how devastating of a backstory Tanjiro has.

While Zenitsu and Inosuke’s dreams are more on the comical side to ease the building tensions. The slower parts of the film also allow for the viewer to fully digest any and all of the emotional beats. Whether those be emotional beats with Tanjiro and his family or Rengoku and the relationship between him, his younger brother, and their parents, most importantly his mother. You’re given the time to fully take that in despite this being the shortest amount of time and the only amount of time you’re given to care about Rengoku as a character.

And if there is any complaint about this film that I have personally or even about the series as a whole is that we don’t get to spend enough time with Rengoku to truly and deeply care more for his death. On the flip side, we do get to see what kind of impact he had as a person on the people around him. More specifically his Hashira peers. Also his younger brother and his father. While that showcased in the manga after Rengoku’s death, the film sets you on that path to that in-between moment from the end of the Mugen Train Arc and into the Red Light District Arc.

While the film clocks in at nearly two hours long, it never really felt like it. That’s all on the shortness of the arc that the film is adapting, the scales of the threat and battles we see on screen, and as I mentioned above, the soundtrack and visuals of the film which are much more upscaled from the series itself; are inviting, immersive and mesmerizing. You cannot help but to not blink while watching the film for the sake of not wanting to miss a single moment of the story.

Another thing this film does so well showcases the power of the Upper Moons and the Hashiras. So far in the series, we have only seen Giyu Tomioka the Water Hashira and Shinobu Kocho the Insect Hashira in brief action beats. And while their respective feats in the series were great, they’re minuscule in comparison to what was displayed in this film at the hands of Rengoku. And this display of power should excite the fans even more for what’s to come in season three of Demon Slayer. Additionally, it should make believers out of the non-believers of the series as well.

Overall, Demon Slayer: Mugen Train delivers a visually stunning and visually immersive story which next-level action sequences and battles that were expected but also exceeded from the studio that brought the source material to life. As a manga reader myself, despite knowing what was coming next at every turn, I still found myself in awe of what I was experiencing and that alone made my viewing of the film that much more enjoyable. If you haven’t heard enough praise for the film already, I hope this review gives anyone who is reading this that extra motivation to start watching Demon Slayer: Kimetsu no Yaiba prior to the premiere to the second season later this year.