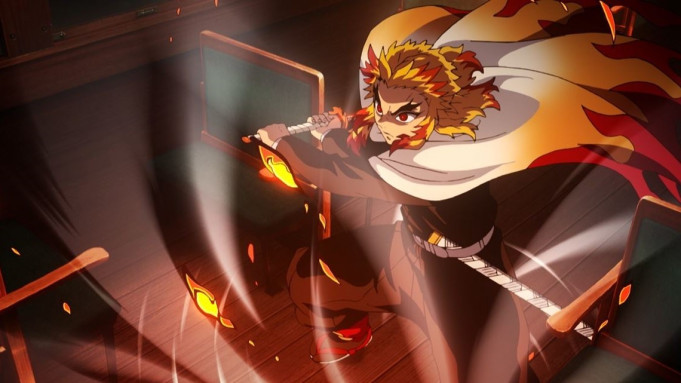 Yes, we know all of the Hashiras and how they look and what breathing form they use, but we have yet to see any of the Hashiras go on a true battle of attrition until the death. Many can argue that we’ve seen Giyu Tomioka and Shinobu Kocho in action during the first season of Demon Slayer but in comparison to what we have seen Rengoku do in Demon Slayer Mugen Train, it is quite minuscule in scale.

To even solidify that statement, Akaza even commends and praises Rengoku on his immense power and the aura his power level gives off before they even engage in full battle. Rengoku is one of the strongest Hashiras in the Demon Slayer Corps but when compared to his Hashira peers, despite his great prowess, he is not the end-all, be-all when it comes to being a Hashira of the Demon Slayer Corps.

The Effectiveness of the Upper and Lower Moons:

We have only seen Tanjiro and company engage with a total of three Lower Moons, Enmu being the most recent one as seen in Demon Slayer Mugen Train. However, the film, along with the first season of the anime really shows how effective the Upper and Lower Moons are, despite their varying power levels. Rui was able to hold Tanjiro off even with the help of Nezuko and her newly awaken Demon Blood Art ability and wasn’t defeated until Giyu Tomioka showed up.

Kyogai was also able to give Tanjiro a bit of a hassle even if it was momentarily. However, Enmu was the only Lower Moon to give Tanjiro a hard time in battle outside of Rui. Even with the help of Inosuke, Tanjiro wasn’t able to overcome Enmu all by himself. When it comes to the rest of the Lower Rank Moons, Muzan kills them in a state of distaste due to Rui being killed and calls them all weak but despite all of their respective weaknesses and them ultimately being no match to a Hashira. They surely gave the lower rank Demon Slayers a run for their money.

With only six of the Upper Rank Moons remaining, including Akaza who ran off into the woods after his battle with Rengoku. Demon Slayer Mugen Train shows how much of a threat the Upper Rank Moons will be no matter who they are facing. If they are able to kill a Hashira or in Akaza’s case, multiple. How or will the remaining Hashira overcome these demons?

How does this set up Demon Slayer Season 2?

When it comes to fan reception of Demon Slayer, the overall consensus is rather mixed. The majority of fans love the series for its story and overall stunning visuals and animation which compliments the series characters and their respective designs in ways we don’t often see in anime. However, there is a group of fans who believe that the anime is simply carried by the animation which sadly is not true.

Looking at Demon Slayer Mugen Train and how the battle between Rengoku and Akaza started and finished. It paves the way for the rest of the Hashiras in the Demon Slayer Corps to truly shine when they finally join the fight against the demons, especially in the upcoming Entertainment District Arc (Red Light District Arc).

The Red Light District will see Tanjiro, Inosuke, and Zenitsu team up with the Sound Hashira Tengen Azui who needs Tanjiro’s help in finding his wives who have gone missing. As seen above Tengen Azui is heavily featured in the teaser for Demon Slayer Season 2. While I’ll refrain from spoiling anything major from this specific arc, this is solely for the anime-only watchers; there are a pair of demons that Tengen, Tanjiro, and company have to deal with and ultimately overcome.

This will be another instance in which we see the full power and strength of a Hashira on full display. As well as seeing some Upper Moon demons show off their power as well. While also seeing Tanjiro and Nezuko unlock new powers. But Demon Slayer doesn’t just stop elevating there. The story as a whole takes a massive jump upwards into what many fans consider the best Demon Slayer arc.

Gone are the days in which we see the Demon of the Week and we are immersed in fights that tie together and really start moving the plot forward and further developing all of the characters we’ve come to love and care about. Ultimately, once Demon Slayer Season 2 kicks off, many non-believers will be made believers and the argument that Demon Slayer is solely being carried by its animation will be null and void.

Once this request is fulfilled, we learn more about Tanjiro’s father and the Hinokami Kagura and its origins. I won’t spoil that because it’s a huge plot point that needs to be seen (or read if you read the manga) and thrusts Tanjiro into epic MC contention. However, it will take some time to get there. There’s a lot to look forward to when it comes to Demon Slayer, Demon Slayer Mugen Train and Demon Slayer Season 2 are just the beginning. Additionally, season two and Demon Slayer Mugen Train should lay to rest the argument that Demon Slayer is solely popular because of its animation.