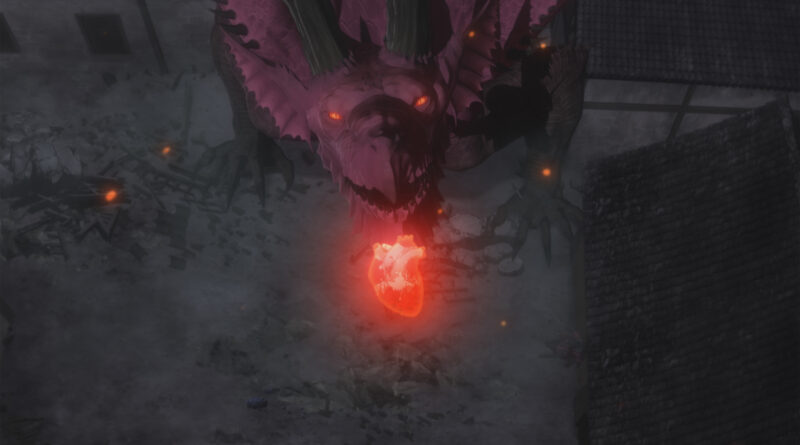 An anime adaptation of Capcom’s game Dragon’s Dogma just landed on Netflix and while it has some heart-wrenching moments, supported by its decent CGI animation and voice acting, it fails to follow through in the moments it really matters.

Dragon’s Dogma Season 1 takes us on a journey of revenge. Protagonist Ethan, played by Greg Chun (Neon Genesis Evangelion, Nier Automata, Super Smash Bros. Ultimate), becomes an Arisen. Arisen are people who remain alive even after their hearts have been stolen. Ethan’s single goal is to defeat the dragon, David Lodge (Bleach, Naruto, Fire Emblem Three-Houses), who slew his wife and unborn child, stole his heart and destroyed his village.

The dragon was probably my favorite part of the series, his voice was so chilling and menacing even if the CGI didn’t quite match up with the atmosphere at times. Ethan is accompanied by Hannah, Erica Mendez (Aggretsuko, HxH, Kill la kill), a Pawn whose purpose is to protect Ethan while he completes his journey. The series is a quick seven episodes, each one named after one of the seven deadly sins, but left me expecting more. Although the pacing is quick the series could have taken more time to develop its main characters as you watch Ethan encounter the horrors of humanity while slowly losing his.

The series sets up Ethan’s motivations very quickly, he must kill the dragon that killed his wife Olivia, and their unborn child. Olivia, played by Cristina Vee (HxH, K-On, Puella Magi Madoka Magica), gets that “I’m the love interest that’s going to die in the first episode and there’s nothing you can do about it” charm just right. Her death is quite sad, and you feel for Ethan as he struggles to deal with her death. Despite this expression of emotional vulnerability from Ethan I couldn’t help but think that there was a lack of depth to this. Olivia like some of the other women in the series is mainly used as fodder meant to help develop Ethan, nothing more.

Ethan is bland in comparison to other characters that outshine him in almost every scene. Hannah for one becomes increasingly more charming as she begins to develop her own sense of self, no longer influenced by just her Pawn upbringing. Elizabeth, a sexually promiscuous woman who is killed by her weak-willed husband along with two knights from the Capital, Balthazar, and Simon bring some much-needed comedy into the series. Even with their very little screen time, their deaths are still sad and impactful.

I tried not to judge the series too hard given the fact that the show was only seven episodes and it’s hard to jam pack a cast of characters with different and in-depth motivations and backgrounds in so little time. But that is one of the series’ main faults in my opinion, despite this, I am hopeful for the next season if it gets renewed. Mainly because of Hannah.

After Ethan turns into the new dragon after slaying the one that took everything away from him, he requests that Hannah “protect the humans from him”. The series ends with Hannah smiling for the first time looking towards the future. I hope that the next season explores her character more as she drifts farther away from simply being an emotionless Pawn.

Overall Dragon’s Dogma is a quick ride that is mostly enjoyable despite its lack of thorough character development along with its sometimes stilted CGI. There’s hope that if it is renewed for a season two that it will explore deeper into Hannah’s background while hopefully taking its time, letting us get to know the characters rather than spearheading their deaths to simply move the plot along.