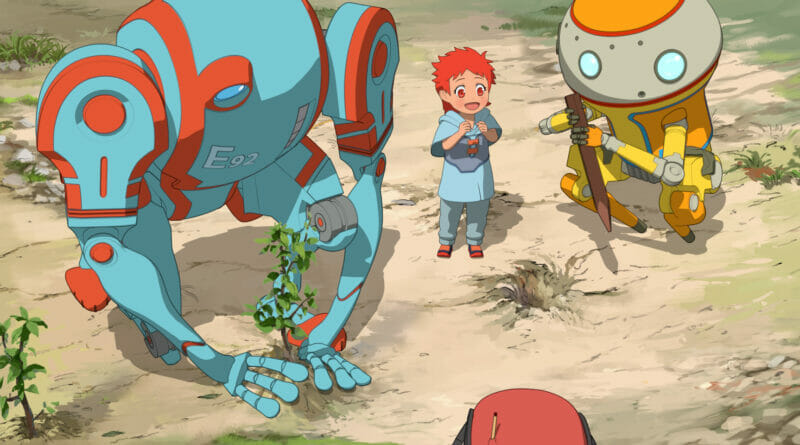 
**THIS ARTICLE CONTAINS SPOILERS FOR EDEN**

Humans are odd. They think order and chaos are somehow opposites and…try to control what won’t be. But there is grace in their failings. – Vision (Avengers: Age of Ultron)

Eden is the latest original anime series coming out of Netflix and is created/produced by Justin Leach and directed by Yasuhiro Irie (Fullmetal Alchemist: Brotherhood) with music by Kevin Penkin follows the story of two robots who accidentally awaken a little girl from cryostasis. These robots must now make the ultimate decision, report their discovery, or hide it from their superiors and risk reprogramming. These robots go with the latter and decide to leave their homeland known as Eden 3 in order to safely raise this newly found child in secret while learning the truths behind the lies within their programming regarding humans.

Coming in at a whopping four episodes, Eden for the most part makes good use of its short episode count and pushes the pace rather quickly while giving you enough backstory to the world of Eden and how it’s become the near-perfect world it has become although it is not inhabited by humans. As the robots mention throughout each episode, they were created by humans with the sole intent of helping humans instead of harming them. The robots were also programmed to work in conjunction with each other and repair each other whenever repairs were needed. Any robot who was not capable to fulfilling their pre-programmed functions were either reprogrammed or ceased from existence.

At its core, Eden is truly a story about humanity’s worth and how detrimental and beneficial they can be to the world and the environment they inhabit. Humans have been “extinct” for thousands of years due to the overpollution of the planet. Since humanity’s ‘extinction’ the planet has been able to flourish and be the vast green, fruitful Earth it was always meant to be and near free of all diseases. Despite all that green beauty on the surface, a much deeper, darker issue lies within it. This comes in the form of the robot commander and overseer of Eden, Zero.

Zero turns out to be Dr. Fields, a once human scientist who created what we know as Eden. The creation of Eden was inspired by the overpollution of Earth and how the world was nearing the point of being inhabitable. Although the series doesn’t showcase this past as we only see his past interactions with his daughter and his wife, Ashley who is also sick in the hospital, we know that his ultimate goal was to create a world free of diseases, a perfect Eden for her to live in and be able to play outside.

The turn of hopeful scientist to evil robot who now wants to destroy humans while understandable lacks any real sense of empathy and this is where Eden truly lacks and it shows in its episode count. The show focuses more on the now and not the then as much as it should’ve and ultimately makes the series a bit hollow. Spending more time with Dr. Fields and his daughter and his wife and seeing how his superiors pick and choose who goes and doesn’t go into supsended animation is something that really should’ve been highlighted.

And it would’ve created a more understandable villain and would’ve made his redemption just that much more impactful. An additional episode or two would’ve really cemented Dr. Fields as Zero a really empathetic villain. However, after watching Eden three times over I still found myself enjoying what the series was looking to explore and the themes it wanted to highlight; especially during the times we are living right now with COVID and the ongoing pandemic.

The animation was great and the color palette used to bring these characters to life was great and the soundtrack was truly amazing. I really think Netflix held back a bit here with this series at it could’ve gone for an extra episode or two to really make these characters memorable. Even the world it was exploring. We see and learn about Eden Zero and Eden 3 but not about Eden One, or Eden Two which is something that should’ve been explored as well. There’s a long list of thing I wish was explored and sadly Eden didn’t. However, I think people will either overlook it or won’t find anything that will truly stick with them post-watch.

Eden is streaming now on Netflix.

Thousands of years in the future, a city known as “Eden 3” is inhabited solely by robots whose former masters vanished a long time ago. On a routine assignment, two farming robots accidentally awaken a human baby girl from stasis questioning all they were taught to believe — that humans were nothing more than a forbidden ancient myth. Together, the two robots secretly raise the child in a safe haven outside Eden.