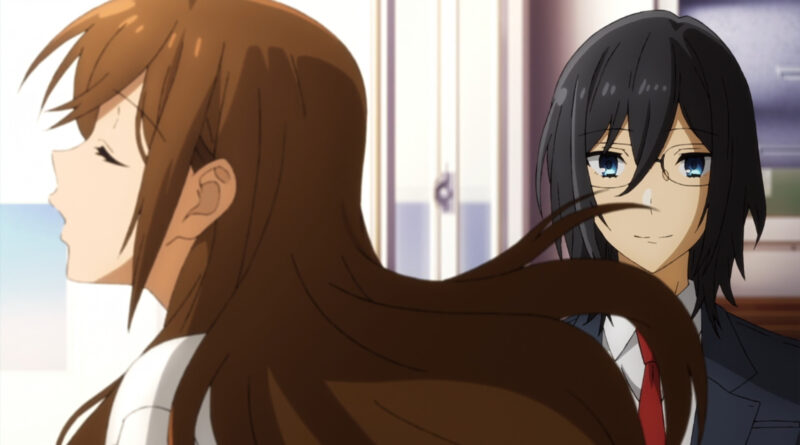 Picture this, you’re fifteen you’re surly and emo, and really only into edgy shounen with a few shoujo ones sprinkled in here and there. But they do nothing for you. You laugh at how predictable and cheesy they are but then in comes Horimiya with its charming art style and sparkling characters and now you’re hooked. So enraptured you are that seven years later at twenty-two you’re still excited about the upcoming anime. It’s me, I’m the twenty-two-year-old who’s excited for Horimiya, and you should be too!

Horimiya has so much heart that I truly think it could be enjoyed by anyone. The first episode does a great job establishing the main cast of characters. Izumi Miyamura and Kyoko Hori are in the same class but run in different circles. Hori is the outgoing, popular girl, confidently proclaiming things like “If he wanted my number he should have asked me himself”.

Miyamura on the other hand rarely interacts with others and gives off a gloomy atmosphere, most people think he’s a creepy otaku. They both seem to neatly fit into a category. But of course, people are not stereotypes and as the day winds to an end Hori rushes home where it’s revealed that she’s actually pretty plain. More of the motherly type, she cleans the house, prepares dinner, and takes care of her younger brother, Souta. Hori keeps this part of herself hidden from others until she happens to run into Miyamura after school one day.

The “reveal” is one of my favorite parts of the manga and it was spectacular seeing it animated because Miyamura looks like a total bad boy! But a very sweet bad boy that would never hurt a fly. Like a PG-13 bad boy. They’re forced to show each other their real selves and from there they find solace in losing the facades they keep up at school.

The episode does start to feel a bit rushed because others, like their classmates Toru Ishikawa and Yuki Yoshikawa, start to notice that Hori and Miyamura are getting closer but in my opinion, the audience isn’t shown the moments where they bond. Part of the charm of the manga was seeing the two bond and develop their feelings for each other. So the first episode felt a bit rushed in that sense but there is still a whole season, hopefully, it slows down and lets us savor their budding relationship.

The animation is gorgeous and the way they show jealousy is subtle yet a perfect way to demonstrate their feelings. The background turns white and their silhouettes shift to watercolor as they deal with these new and frustrating feelings. High school is all about fitting in and not standing out. Horimiya tells us it’s okay to leave those facades behind. It let my teenage self who was too scared to do such a thing believe that one day I would find people I could truly be myself with like Hori and Miyamura.