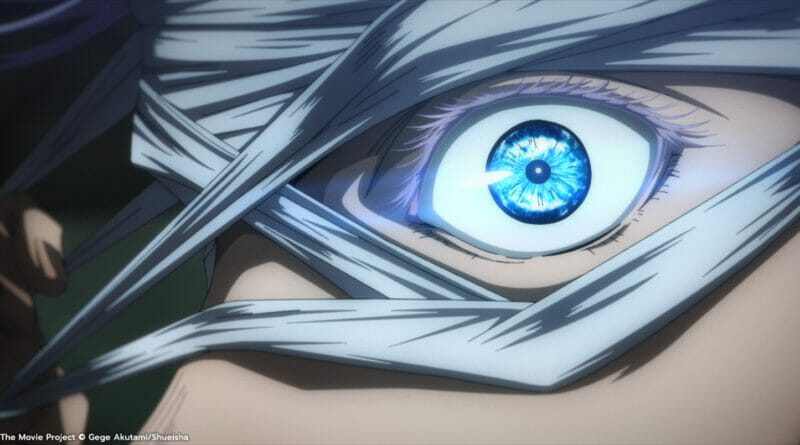 ‘Jujutsu Kaisen 0’ is set to hit theaters in North America this Friday, March 18. Thanks to the folks over at Crunchyroll and Funimation we got to check out the film super early and while I haven’t read the prequel manga ‘Jujutsu Kaisen 0’ is adapting; I can easily say that fans can go into this film without watching the actual ‘Jujutsu Kaisen’ anime and without reading any of Gege Akutami’s source material to enjoy the full scope of this film.

Animated by MAPPA, the same production studio behind the anime series that proceeds this film and directed by the great and ever so talented Sunghoo Park, who just also directed the first season of ‘Jujutsu Kaisen’. ‘Jujutsu Kaisen 0’ follows a young boy by the name of Yuta Okkotsu, who is recruited by Gojo Satoru to join Jujutsu High School in order to become a sorcerer so he can have better control of the cursed spirit that is his childhood love and friend, Rika Orimoto.

As the film opens we are immediately thrust back into the world of Jujutsu Kaisen and are immediately introduced to Yuta Okkotsu who is being bullied by a group of upper classmates. Pleading to be left alone, stuck between a rock and hard place, Yuta calls on Rika’s cursed spirit to aid him in this time of need, heavily injuring these upper classmates in the process.

Yuta Okkotsu now finds himself in the same position we see Yuji Itadori in when we meet him in the anime, facing execution. Just like the anime series, Gojo Satoru is tasked with this execution but offers to take him under his wing and train him into becoming a sorcerer, thus enrolling Yuta into Jujutsu High. The one major aspect that differentiates this scene from the anime series is that, unlike Yuji who was given a specific task in order to avoid execution, Yuta is not and is just here to learn the ropes and learn how to control this cursed spirit.

Yuta does this alongside some familiar faces that we’ve seen in the anime series before, Maki Zenin, Panda, and Toge Inumaki. The film does a perfect job at laying the foundation that will drive the narrative forward. By giving us a quick rundown of Yuta and Rika’s relationship and the tragic events that lead to her death and how she became a cursed spirit; while also showing how her love for Yuta is the precursor for her overall protection of him. Even in death, her love for him has remained.

Something ‘Jujutsu Kaisen’ anime fans may have a problem with is that the film walks a very similar line as the anime that precedes it. Almost beat for beat. Even when Yuta’s first mission is at a local school, just Yuji’s was. Here alongside Maki, Yuta is put to the ultimate test. Now there are some differences in how things play out and how Maki and Yuta respectively have to overcome the cursed spirit in this school. However, what separates this specific moment of the film compared to the anime is what Yuta and Maki have to overcome.

Given that this is our first big action piece of the film, it’s a perfect time to talk about Sunghoo Park’s direction when it comes to actions sequences. It’s something he more than excels at. His big action pieces can be seen in the ‘Jujutsu Kaisen’ anime series and other anime series like ‘The God of High School’. Needless to say that Sunghoo Park is no slouch and the action sequences in this film further prove how talented he is behind the camera.

MAPPA compliments these action sequences with great allure and a great soundtrack. Perfectly meshing everything together to look as fluid as it is beautiful. It is always a treat to see the studio that worked on the original anime adaptation working on the film adaptation because you know you will get more of the same, if not better. A perfect example is UFOTABLE’s work with ‘Demon Slayer: Kimetsu no Yaiba’, and ‘Demon Slayer: Mugen Train’. It is a literal feast for the eyes if you will.

Action pieces aside, what truly makes ‘Jujutsu Kaisen 0’ truly stand out and be such an engaging film is the characters we follow. Although we’ve seen the likes of Gojo, Maki, Panda, and Toge before; the focus is solely on them as this time around they are the first-year students and are going through the motions of said first year. It adds a bit more background to their story and their specific roles as seen in the anime series since we meet them as established second-year Jujutsu Sorcerers.

Focusing more on the characters we get to spend a decent amount of time with Geto. A man who made a brief appearance in the anime series, Geto is also the best friend (or former) of Gojo Satoru and is a former Jujutsu High School student. Geto for the most part is a looming threat throughout the film. Planting the seeds for an all-out assault on not just Jujustu High, but also the different sectors of Japan in order to fulfill the dreams of his ideal world.

While we get to spend some time with Geto and his loyal followers, I feel like his role was still minimal, given the timestamp of when the overall story of this film takes place. There’s more to Geto and Gojo’s relationship than what we see here and I know that comes at a much later time and will be seen at some point in the anime. But I feel like this was the perfect place to dive into that a little more. We do get enough background to Geto however, there’s no real complaint there as I feel he was truly a menacing villain here. Although his ambition and ideals got the best of time.

When it’s all said and done, ‘Jujutsu Kaisen 0’ delivered on what it intended to do. Providing a good adaptation of the source material that is open enough to keep fans old and new thoroughly engaged and entertained through the film’s entire runtime. We’re keeping this review as spoiler-free as possible and there are huge revelations in this film that will get fans, whether watching at home or in theaters, really hyped. Especially when it comes to the final battle. There is a post-credit scene so we implore you to stick through the credits, enjoy the awesome soundtrack until you get that cool post-credit scene to really cap off your ‘Jujutsu Kaisen 0’ watching experience.

Final thoughts: ‘Jujutsu Kaisen 0’ is a thrilling entry to the ‘Jujutsu Kaisen’ series bringing forth a great soundtrack, hard-hitting action, and beautiful animation with a deeply rooted emotional story about promises, love, friendship, ideals, and morals.