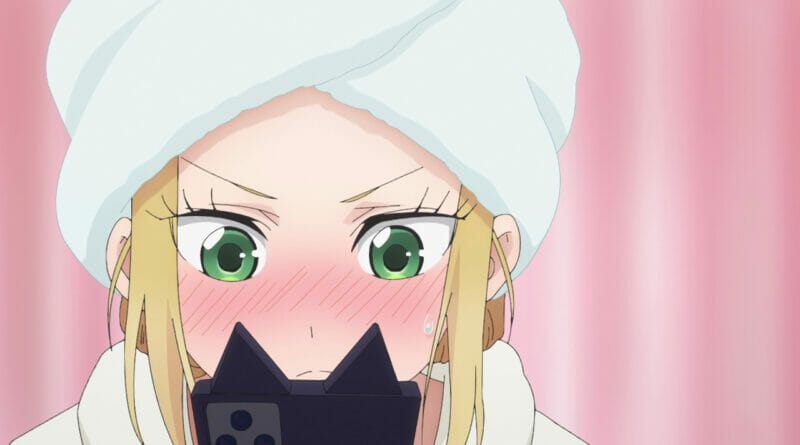 
Fudo and Desumi have gone two whole weeks without seeing each other, can Fudo make the ultimate move and successfully see his dream girl? Spoilers ahead for episode three of ‘Love After World Domination’

It’s been two weeks since Fudo and Desumi have seen each other. Last episode we saw the couple go on a date that almost took a turn for the worst but ultimately gave the couple the much-needed quality time together outside of their normal attire and superheroic rivalry. Fudo has now purchased a smartphone and has been struggling to get a grip on how to use it.

When things pick up on this week’s episode, we see Misaki and Big Gelato playing UNO or in this case UNON. This was probably one of the greatest moments in this episode as it tackles one of the most debated real-life UNO card game rules, stacking draw cards. Super meta and comical. However, this moment is quickly interrupted but an emergency alert that Gekko has created a new super-powered weapon. With Misaki and Fudo the only two heroes available at Gelato HQ, Big Gelato tasks one of them with infiltrating Gekko HQ and destroying that weapon.

Fudo without hesitation volunteers himself for this mission (secretly seeing this as an opportunity to see Desumi) and sets off on his mission to infiltrate Gekko and destroy the weapon. Back at Gekko HQ, we see how Desumi has been handling these past two weeks without seeing Fudo and it hasn’t been pretty. She’s visibly irritated and as per her henchmen, looking more deadlier than usual. Striking immense fear into them. Coming across Culverin Bear, he compliments her pouch stating that it is a great way to hide weapons and keep the enemy’s guard down (unbeknownst to him, she’s simply carrying makeup).

After Culverin Bear leaves, Fudo appears from the ceiling vent, surprising Desumi. Happy to see each other they head into Desumi’s dressing room in order to figure out a way to get him out without alerting the rest of the base. However, that plan is quickly abandoned as the base is fully aware that an intruder has arrived. Desumi is made aware of this matter and is almost caught by her henchman with Fudo in her dressing room. The same happens when Culverin Bear comes into the room.

Fudo and Desumi quickly hide in this little locker and try their absolute best to keep quiet until Culverin Bear leaves the room. However, things do not go as planned as Fudo and Desumi aren’t capable of maintaining their cool after Fudo shows Desumi that he has ber bra in his hands. Punching Fudo sends him flying out of the locker, inadvertently knocking out Culverin Bear in the process.

This sets off Culverin Bear’s new weapon, setting off a massive explosion, destroying half of Gekko’s base. Back in Gelato HQ, Misaki and Big Gelato are alerted of Fudo’s mission completion. Outside in the nearby woods, Fudo and Desumi exchange numbers so they can speak even when they aren’t able to see each other. Later that night Desumi calls Fudo but learns that he gave her his house number as his mother is the one who answers the call. Desumi suggests that Fudo purchases a smartphone to make their means of communication more efficient and direct.

The following day, Culverin Bear is doing repairs on Gekko HQ but ends up doing some additional damage to the base’s massive skull display. ‘Love After World Domination’ has now introduced Supreme Leader Bosslar, Head of Secret Society Gekko, as he calls for a team meeting so they can plan their next attack. Here we learn how Supreme Leader Bosslar operates, and how he uses negative human emotions as a power source to create new monsters and is currently using it to create the ultimate monster he named Ultimate Phantom.

In this meeting, we are also introduced to the Beast Princess, Steel Princess, and Heat Princess. Unfortunately, for Supreme Leader Bosslar, none of them are suggesting proper targets. Desumi, daydreaming about date locations she spoke about with Fudo, suggested an amusement park. Despite Bosslar’s initial reaction, she is backed by Beast Princess and Steel Princess solely due to the fact that amusement parks are always crowded and it would be the perfect place to attack given all the negative emotions they can farm.

Back at Gelato HQ, Fudo is struggling to learn how to use his smartphone, Big Gelato and Misaki make fun of him for this. However, Misaki’s suspicion starts to grow, thinking that Fudo is hiding something from the team (which he is). Sunday has now come, Fudo is on site after learning about Gekko’s attack on the amusement park. Looking to confirm her suspicions, Misaki and Haru attend undercover in hopes to uncover Fudo’s deep dark secret. While Misaki has her suspicions, Haru on the other hand doesn’t.

Culverin Bear notices that Fudo is patrolling the park and suggests that they retreat and give up on their plan, however, Desumi goes on the attack. Misaki and Haru join the fight, but Misaki notices that Haru is a bit too chatty about Fudo, complimenting him with every word that comes out of her mouth. Haru downplays Misaki’s statement. Desumi and Fudo manage to get away from the battle to spend the afternoon together going on rides around the amusement park, essentially going on a date.

Desumi reflects on how fun it’s been getting to know Fudo on a different level. After sharing a tender moment the couple decides that it’s best they go back to the battlefield now that the battle between their respective parties has ended. After the battle, Misaki and Haru went shopping and since the rest of the guys were around she has them carry her bags.

Here we get one of, if not the most important scene in this series so far, Haru seeing a photo of Fudo and Desumi on the rollercoaster together. Not only does this reveal to Haru that Misaki’s suspicions were right but also reveals to her that Fudo may have some sort of romantic relationship with Desumi, even though it wasn’t verbally mentioned. But given that the only reason she and Misaki went to the amusement park was to see if Fudo was hiding anything, it was nothing less than an unspoken confirmation.

There was a lot to unpack in ‘Love After World Domination’ this week. This series with only three episodes have been thoroughly enjoyable. It’s the perfect blend of super-heroics, romance, and comedy. The thing that really has me captivated with this anime is the anime’s homages to things like Super Sentai/Power Rangers, the great animation, character designs, and comedic timing. For an anime series like this one to work so fluidly with its action and animation is truly an added bonus when watching what is just another slice of life, rom-com anime series.

Pair all of that with an underlying mystery that is Fudo and Desumi’s secret love affair and you’re fully immersed in the story, wanting to see how this all plays out and the ramifications their love affair will have on not just their respective teams, but also the world as a whole.

‘Love After World Domination’ is streaming now on Crunchyroll.