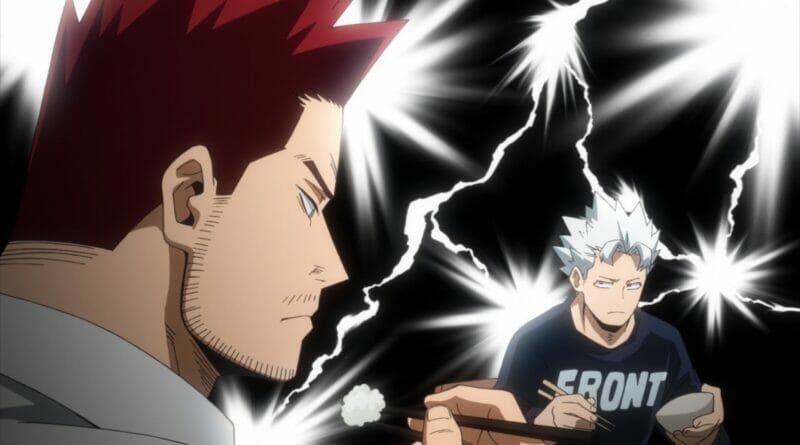 
It’s been quite some time since I reviewed an episode of My Hero Academia and to be quite honest, there’s not much to really talk about. This season has been a bit slow and while we are on the heels of the Class 1A vs Class 1B arc and now well into the series latest arc which sees Shoto, Deku, and Bakugo training with the Number One Hero, Endeavor. This week’s episode of My Hero Academia has finally given us an episode to really dive into and that’s the dynamic between the Todoroki family and how Endeavor is looking to right his wrongs as a father.

Shoto and Endeavor have had a really difficult relationship, which has seen both parties go back and forth about their respective feelings about each other and how they both view each other. As we have seen throughout season four of My Hero Academia and during this season as we follow Endeavor more than before, Shoto and his father have been trying to really work on things. One thing I really enjoy about this plot thread is that it’s super relatable to me. Of course, to a certain extent, but it’s relatable nonetheless.

Other than its sense of relativity, seeing Endeavor wanting and trying to do right by his kids, even though it doesn’t seem like he is is really good to watch. I also enjoy that his children, especially Shoto and Natsou aren’t making things easy for him. They’re really making him work for that redemption and really making him work for their forgiveness. Natsuo and Shoto are really trying but are also really conflicted on whether or not they should forgive their father.

As Shoto mentions, he adores Endeavor as a Pro Hero, but as a father, he still can’t find it within him to forgive him for what he’s done to his mother. Which is completely understandable. This dynamic between Endeavor and Shoto really makes this current arc watchable even though there isn’t much going on.

We do have Hawks who has infiltrated the League of Villains and I think the switching of arcs while has been a rather controversial decision, will really elevate the ‘My Villain Academia’ Arc as well as the ‘Meta Liberation Arc’ of My Hero Academia. I’ve also thoroughly enjoyed watching Endeavor in all of his fiery glory as the Number One Hero but also love his reflectiveness in how he’s always going back to what All Might has told him about being the symbol of peace. Endeavor has always compared himself to All Might and has always hammered himself down due to his shortcomings, a heavy display of imposter syndrome.

But in the same vein, Endeavor knows he could never really measure up to what All Might was but he also understands that he can also be a symbol of peace in his own right. Seeing him train Shoto, Bakugo, and Deku and how they need to cultivate what they’ve learned in school and apply it into the real world really shows you how great of a hero Endeavor truly is. And how he sees the potential of his underlings.

One thing I’m really looking forward to is seeing how things between the Todoroki Family resolves. I think Endeavor is redeemable as a parent and as we see in this week’s episode, Shoto and Natsou also believe he is but childhood trauma can have a very strong grip on someone’s emotions and mental well-being. We’ve seen this on full display with Shoto and how he’s always doubting himself and how he limits his own potential after being belittled by Endeavor for so long.

Things have changed now though and Endeavor has been trying to push Shoto and his classmates in a more positive way, a more constructive way and I think that’s what’s really softened up Shoto a bit and while he’s playing it off as only using Endeavor to get better, this was for sure a way for him to be around his father more and learn from him in a more positive and less abusive setting. He is the Number One Hero after all and there’s a certain image that comes with that title and it must also be maintained, Shoto knows that.

As I mentioned previously, My Hero Academia has definitely slowed down a bit after the first half of the season but I know what it’s leading up to and I know what’s coming with that; manga readers know what I am talking about. Either way, My Hero Academia is still a must-watch series for me no matter how long it takes to develop certain plot threads and arcs. Also, can we get Bakugo to learn how to read the room. The rudeness during a sensitive topic while visiting someone’s house and family for the first time was uncalled for.

My Hero Academia is streaming now on Funimation, Crunchyroll, and Hulu.