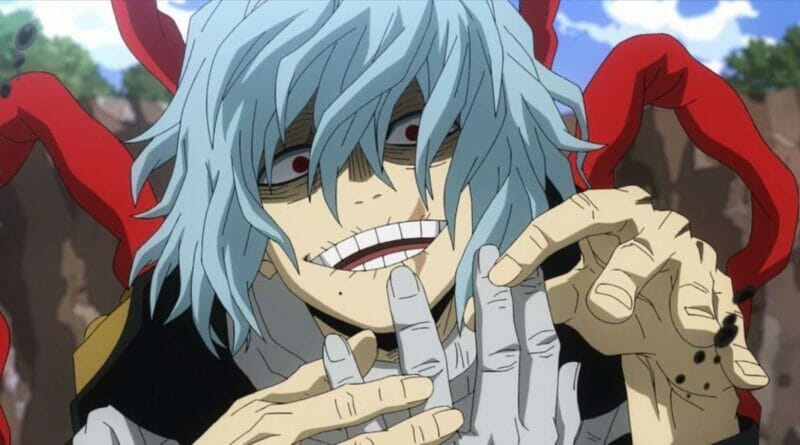 
My Hero Academia’s “My Villain Academia” arc is finally here and Tomura Shigaraki has found a new sense of direction!

The second half of My Hero Academia Season 5 is here and with it finally comes the anime debut of the “My Villain Academia” arc. One of the most exciting arcs in the manga alongside the Meta Liberation arc. We kick off this week’s episode of My Hero Academia with a flashback of when Shigaraki and the League of Villains meet with Doctor Ujiko and eventually meet with All For One’s former bodyguard Gigantomachia. We learn that Gigantomachia doesn’t feel like Shigaraki is a worthy successor to All For One and his overt loyalty to All For One has made it his goal to crush his opposition.

Doctor Ujiko reveals himself from the shadows to inform the viewers of his loyalty and his work for All For One and how much he has improved the Nomus to near-perfection. For all of his smarts, Doctor Ujiko is no wimp. He stands a firm ground in front of Shigaraki and his League of Villains but also offers a helping hand in Shigaraki’s plan to reclaim the villainous throne the League of Villains once stood upon. Now that the Shie Hassaikai have been finished thanks to Deku defeating Overhaul the crown is up for grabs. But there are a couple of things Shigaraki and his League of Villains must overcome before this dream becomes a reality.

In order to fully get Doctor Ujiko’s helping hand and his full arsenal of Nomus, Shigaraki alone must subdue Gigantomachia who is unrelenting in his attacks against Shigaraki. Despite minor breaks in between their battles with each other, Shigaraki has made little to no progress against the strong giant. But he is determined to wear him down and bring Gigantomachia to his knees and accomplish his goals.

Shigaraki has a knack for intentionally and unintentionally drawing great attention and threats to himself and the League of Villains and they’ve all ultimately have become true tests of his will, villainous ways, power, and overall smarts. As a successor to All For One these tests front a storytelling standpoint is crucial to really cementing Shigaraki as that real big threat and worthy enough successor to fill those huge shoes left for him to fill.

As Twice panics over Giran being captured, he wants to recklessly jump into action and save his friend. However, Shigaraki has bigger plans and since Gigantomachia is able to find him no matter where he hides allowing him to continuously attack Shigaraki, he wants to use this to his advantage. If Re-Destro really has over 100,000 villains in his army (which he really does), then Shigaraki can get all of those villains to attack Gigantomachia and ultimately subdue him and in the process allow him to accomplish his goal and get Doctor Ujiko’s help.

This week’s episode of My Hero Academia also gave us a glimpse into Tomura Shigaraki’s past. Informing us on how and why he wears all of those hands around his body and his face. As Tomura Shigaraki is informing Doctor Ujiko about how he hates everything and how he has all of this pent-up anger within him. How he doesn’t recall much of his childhood prior to being taken in by All For One, we jump back in time to see a young Shigaraki along and crying under an underpass. Shigaraki is then greeted by All For One who consoles him all the while emotionally manipulating him and planted the seeds for his distaste towards heroes.

All For One shows Shigarki his new home and tells him that he is now his master. All For One then introduces him to Doctor Ujiko and presents Shigarki with a cart filled with severed hands. He informs Shigaraki that these are the severed hands of his family who he killed due to his Quirk awakening within him. This makes young Shigaraki sick to his stomach and All For One proceeds to ask Doctor Ujiko to work on him. As we see in the opening moments of this episode, Doctor Ujiko has been performing Quirk experiments on Shigaraki for quite some time.

Shigaraki tells Doctor Ujiko that despite the burning anger he feels within him, these hands calm him and all that of the memory he has of his family is simply just fragmented images. It seems that to this day, Shigaraki is still feeling a sense of remorse or even guilt about killing his family but it could also be the source of his intense anger. We have yet to see more about Shigaraki’s past and his villainous origin, we’ve only gotten our first glimpse of it with this episode of My Hero Academia but more of Shigaraki and the League of Villains is on the horizon as the My Villain Academia arc progresses.

My Hero Academia has been a bit slow this season but now that the Meta Liberation Army is here and the My Villain Academia arc has officially commenced things are about to get really dark and really interesting. Giving the spotlight to the villains alone is something that isn’t often done in storytelling by My Hero Academia is doing it and it’s really going to elevate the anime more than it has already.

My Hero Academia Season 5 is streaming now on Crunchyroll and Funimation.