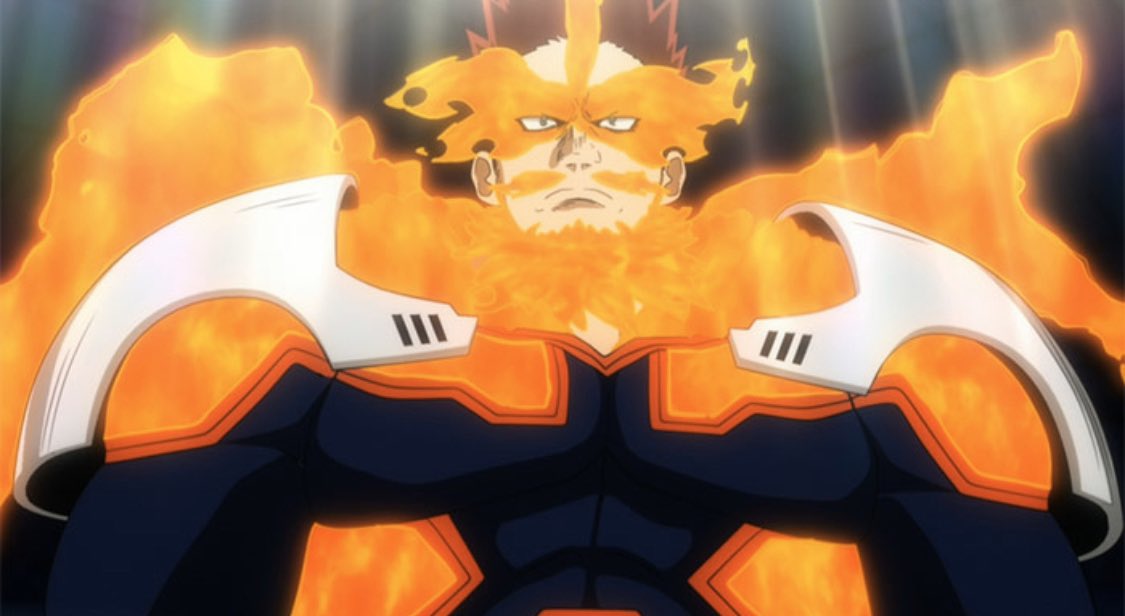 
My Hero Academia has set the stage for one of the hottest finales in My Hero Academia history. All puns intended. Coming off an exciting battle between Gentle Criminal and Deku, culminating in a tear jerking School Festival. The good times have come a halt.

This week’s episode delivered a hefty amount of anime debuts and the introduction of a new enemy, in High End. A new, upgraded version of Nomu. Housing unlimited regeneration and multiple Quirks. High End will be Endeavors’ greatest test as the newly official Number One Hero to date.

At the start of the episode we get a small update as to what’s going on with Eri. The episode reiterated that Eri was abandoned by her parents, which is only partially true since she accidentally killed her father. This causes her mother to abandon her and leave Eri in the care of her now comatose grandfather.

We also learn that her horn is slowly enlarging once again which is not a good sign. As we witnessed during the battle with Overhaul and Deku. As Eri is overcome with emotions, her horn grows and so does the power behind her Quirk. All signs point in an inevitable disaster. So leaving her in an orphanage is not the best option right now.

Keeping Eri at U.A. under the care of Togata, who’s essentially become Eri’s father figure was the best option overall as the school teaches her how to control her Quirk and powers.

The Pussycats are back baby!!!!! While their return is brief. The are here mostly for the Hero Billboard event but have also banded back together to help the heroes behind the scenes. All For One is still a threat despite being captured and he’s also holding secrets as to what Quirks he’s stolen in the past. So while he’s under captivity, he’s still under heavy investigation.

The Wild, Wild Pussycats also shed light on the Pro Hero Rankings and how they’re conducted twice a year. Despite their lack of Pro Hero work, it hasn’t affected their ranking. Plus, we also learn via some silhouettes that Hawks has been the Number Three Hero this entire time.

While watching the episode I compiled the list of the Top 10 Ranking Heroes.

During this presentation we get the anime debut of both Hawks and Mirko.

Manga readers know that Mirk will become a fan favorite, just like Hawks. You’ll see why when the time comes.

Additionally, Endeavor gets a new costume. This is the same costume he wears during the events of My Hero Academia: Heroes Rising.

We also get some backstory to Hawks. Hawks is a 22 year-old Pro Hero, who opened his own Hero Agency at the age of 18. In just two years, at the age of 20, Hawks became one of the Top 10 Pro Heroes. Making his the youngest and fastest Pro Hero to accomplish such feat.

While we have yet to see Hawks in action, we do see that he can telekinetic powers and that’s how he controls the feathers of his wings. He has the ability to make constructs with his feathers. He can also shoot his feathers to attack an enemy or save a dog from being hit by a truck.

After this exchange Hawks informs Endeavor about his ongoing investigation on Nomu. Rumors have been spreading like wildfire across Japan and other parts of the country that have no connection to prior Nomu encounters, that new Nomus have been appearing.

Hawks thinks this is could be reality or just people trying to cause panic amongst the people. Until High End attacks Endeavor and Hawks. Igniting the huge battle that’s to come in the season finale next week and marking Endeavor’s greatest test as a Pro Hero to date!

Now I know many of your are probably asking how this ties into My Hero Academia: Heroes Rising?

At the start of the film, Endeavor and many other Pro Heroes, including Hawks are trying to stop Dabi, Compress and other members of the League of Villains from transporting what they believed was another Nomu.

As Hawks arrives on scene, he reveals that the chamber in the truck was one that’s been used to create new Nomus or keep one alive. Hawks then proceeds to depart and continue his investigation of the League of Villains. This is his main agenda throughout the entirety of the film.

Now with his introduction in the anime, we’ll get to see the start of that investigation and all of the events leading up to that initial encounter between the League of Villains and Endeavor in My Hero Academia: Heroes Rising.

As I mentioned above, Endeavor’s new costume first debuted in the film, as well as his facial scar (if you know, you know) and the first time we learn that he’s officially become the Number One Hero. Which has now been made official in the anime canon.

Next week’s battle between High End/Nomu will set the course for My Hero Academia Season 5 and the inevitable rise to power for Shigaraki and his League of Villains.

My Hero Academia Season 4 comes to end next week. A new key visual for today’s episode and next week’s final episode has been released which you can see above.

If you want to discuss more about this week’s episode of My Hero Academia, feel free to shoot me a DM on Instagram or a tweet on Twitter.

For more news, updates, and reviews on My Hero Academia keep it locked right here!