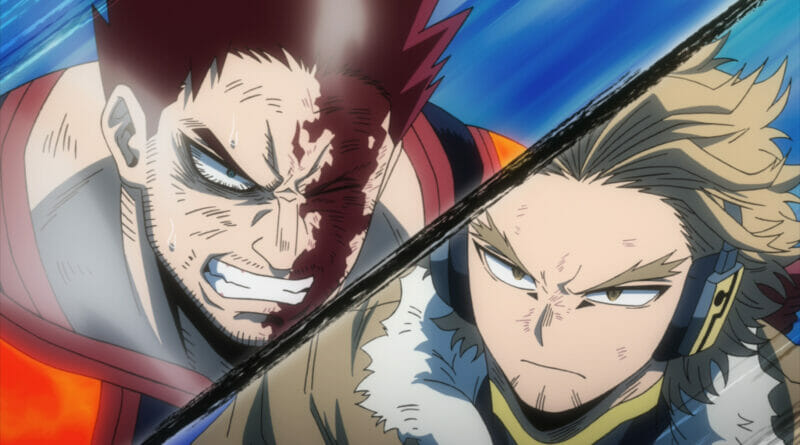 My Hero Academia Season 5 is officially back in full effect after its recap episode of last week. Last week we saw Class 1-A undergo a training exercise as two of The Big Three played villains in order to further this training exercise for our new licensed heroes. This week’s episode of My Hero Academia Season 5 dives into the aftermath of Endeavor’s recovery and the shocking revelation of the Number 2 Hero Hawks and his role in infiltrating/working alongside the League of Villains and of their leading men, Dabi. As well as diving further into Deku’s dream and the history of One For All and All For One.

After being named the Number 1 Hero, Endeavor faced his biggest task yet under this new title by facing off with a Nomu. A Nomu much much deadlier than any of the previous Nomus any of our heroes have faced before. After a grueling battle with Nomu and with the help of Hawks Endeavor comes out victorious. However, he is met by none other than League of Villains member Dabi, who’s been wanting to get his hands on Endeavor for quite some time.

Seeing this as the perfect opportunity to strike both the Number 1 and Number 2 heroes who just so happen to be extremely injured, Dabi attacks; only to be stopped by Mirko, giving fans the first piece of action from the fan-favorite heroine this season (trust me, there’s more to come).

This episode does have some connective tissues to the latest My Hero Academia film, My Hero Academia: Heroes Rising, we won’t get too much into that simply because there are much more important things to talk about, like Hawks being in cahoots with Dabi and the League of Villains.

At first, it’s sold to the viewer that Hawks is not as heroic as he may seem. As the episode shows that the Nomu attack on Endeavor was planned by Dabi and Hawks. But it’s quickly revealed that the government has hired Hawks to infiltrate the League of Villains by befriending them and joining their ranks, essentially playing both sides. However, this task given to Hawks is given to him to benefit both parties. He gives Dabi and the league hero intel while he reports back to the government with even better intel of the league, their whereabouts, and their higher-up All For One.

The huge takeaway here is that Hawks is essentially the fall guy who doesn’t mind getting his hands dirty for the greater good. While he’ll be looked at differently if this secret mission of his was brought into the light, he knows and acknowledges that he has what it takes to take on this burden while also acknowledging that he doesn’t have the same freedoms other Pro Heroes do.

Picking up where we left off at the closing minutes of My Hero Academia Season 4, we meet Deku in his dorm once again as he falls asleep and ends up in this dreamworld meeting the vestiges aka the previous users of One For All. Here he meets the original One For All user All For One’s younger brother. Here Deku learns about how One For All came to be and how All For One, who started out as a just individual, become the menacing villain he’s known as today.

Sadly for the episode, we get a much more abridged version of this dream and that’s all for keeping the episode flowing in its 24-minute runtime. However, in the My Hero Academia manga, they give more exposition to both halves of this episode, so there’s more context to the Hawks and Dabi ordeal and Deku’s dream. Ultimately they kept what they felt was more important but for me, I think they could’ve spent another episode on these specific story beats unless their plan is to expand on them later on this season.

My Hero Academia packed a lot into one episode this week and while I haven’t mentioned it all that much we also get a turn of character for Endeavor who is now trying to do right by his wife and children and atone for his failures as a father. We all know that throughout My Hero Academia’s tenure, we’ve seen Endeavor be a rather unpleasant father to his children, especially Todoroki, and an abusive husband of sorts to his wife. While also being huge on neglect due to wanting to become the Number 1 Hero, a title previously held by the now-retired All Might.

It’ll be interesting to see how My Hero Academia further adapts this arc in the anime and how much they’ll leave out just for the sake of keeping a specific runtime and episode count for the season. For those who are looking for a deeper dive into the plotlines of this episode I highly recommend picking the My Hero Academia manga.

My Hero Academia is streaming now on Hulu, Funimation, and Crunchyroll.

For more film, gaming, anime, and TV news, trailers, and updates, make sure to keep it locked right here at The Nerdy Basement. And while you’re here, consider supporting us on Patreon as well! It’s an easy way of supporting us so we can keep proving you with your Nerdy News!