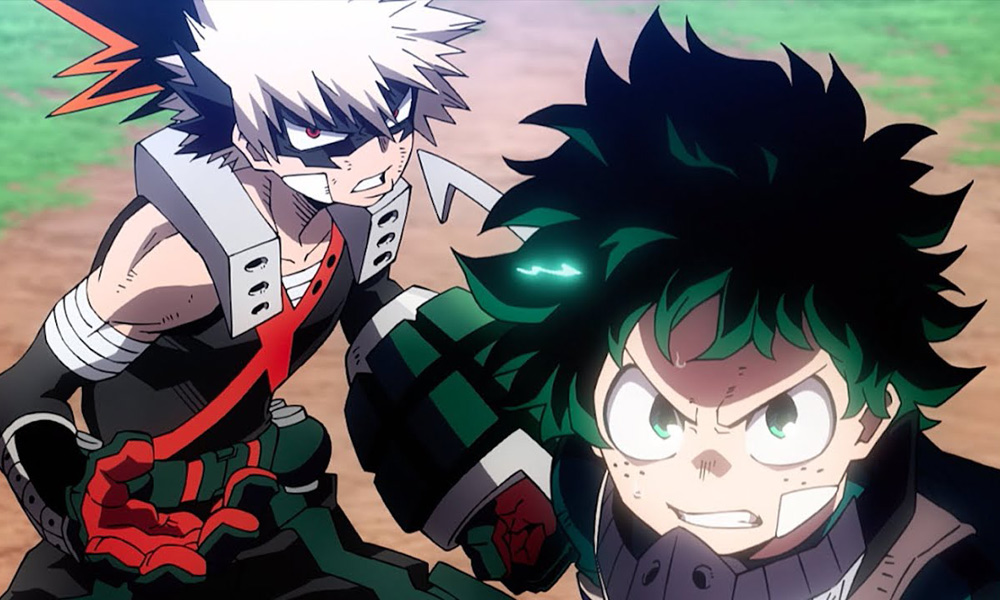 MY HERO ACADEMIA: HEROES RISING GOES BEYOND PLUS ULTRA! (REVIEW)

Our heroes are usually surrounded by teachers and aided by their teachers who are also Pro Heroes. So they can count on them whenever they’re in trouble. It was amazing seeing these students on their own doing all this hero work. Even if it’s just saving a kid from drowning or making ice for the local shop, or even flying around making sure everyone is safe. Even something as minute as patrolling the area. They do it all.

The students of Class 1-A are here to fill-in and keep Nabu Island safe since the island is essentially crimeless. There’s no designated Pro Hero on the island either so the students will do their real training there until a Pro Hero is assigned to the island. That’s until the island is viciously attacked by Nine.

A villain with a chilling resemblance to All Might’s arch-nemesis, All For One. Nine and his henchmen, Slice, Chimera, and Mummy wreck havoc on the island in search of something Nine is looking for. There’s a deeper connection between All For One and Nine but that’s spoiler territory so you’ll have to go see what that is for yourself. Including what Nine is in search of.

Outside of Nine, the standout villain to me was Chimera. He has two amazing fight sequences here with Todoroki and Tenya. It’s truly amazing.

My Hero Academia: Heroes Rising doesn’t miss a beat. And the title truly holds some weight in terms of what it’s delivering with its story. We are literally watching our favorite heroes rise to the occasion and Go Beyond, Plus Ultra! We hear this phrase in every episode of My Hero Academia, and while we have seen moments in the series where the heroes Go Beyond, Plus Ultra. It’s typically one specific hero and one grand moment.

This time around its EVERYONE! Even the students who’s Quirks could be considered the weakest of all time. But everyone rises to the occasion and just like every episode of My Hero Academia, there’s a lesson from All Might that just reigns and pushes our heroes even further. Laying it all on the line for the greater good and safety of the people on Nabu Island. It’s truly beautiful. Tearjerking even (I cried a little, I can lie).

There’s one specific moment during the final battle that I will forever hold close to my heart. It’s a beautiful moment that displays mutual respect between Deku and Bakugo. There’s so much character growth for both heroes and the way these two friendly rivals overcome what is literally impending doom was so well done and so epic. I would’ve never in a million years thought of this moment ever happening in My Hero.

But it’s such a beautiful moment and it will be spoken about for years and years to come. I have no idea how the creators will even come close to topping this very moment.

I must also give Bones a huge amount of props, credit, respect, whatever you want to call it; praise even. The animation for this film was so well done. The colors really pop. The style in the animation looked even better than what Bones has done with My Hero Academia since the anime’s debut. I cannot stress enough how amazing this film is.

I will say this though. Despite being promoted as a film that fans can watch without having watched My Hero Academia: Two Heroes (which is true) or My Hero Academia Season 4, while true, it is to an extent. There’s a bigger hand at play here in this film and it ties back to something in this current season of My Hero Academia, I just can’t mention what that is.

It has no effect on the film’s story but it does hint or essentially set up with what’s to come down the line in My Hero Academia. I only say this because Hawks in this film and there is something he is investigating further than what he is investigating in this film. We know he’s coming to the anime series at some point since he was teased in the third episode of this current season. Hawks also plays a pivotal role in an upcoming My Hero Academia arc which is somewhat teased in this film; manga readers know exactly what I am talking about.

Overall, My Hero Academia: Heroes Rising delivers on all the aspects that have made My Hero Academia the hit anime series it has become in such a short time. Once the film hooks you and reels you in, there is absolutely no letting go and its a thrill ride all the way till the end.

Make sure to go see My Hero Academia: Heroes Rising in select theaters on February 26th.