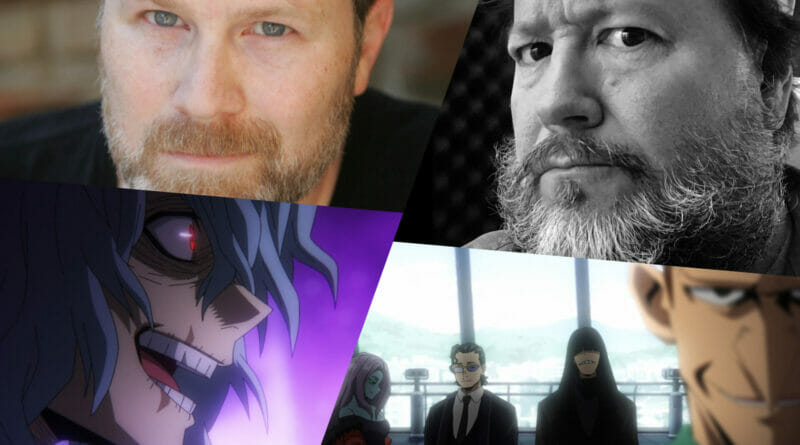 My Villain Academia Interview With Eric Vale and Sonny Strait


My Villain Academia has hit the ground running and while we are only two episodes in and now heading to third things are getting intense between the League of Villains and the Meta Liberation Army. In this interview, we chat with Eric Vale and Sonny Strait the English dub voices of Tomura Shigaraki and Re-Destro respectively. These two individuals take center stage in the My Villain Academia arc as Tomura Shigaraki and his League of Villains aim to take out Re-Destro and his Meta Liberation Army.

The Nerdy Basement: Now that My Villain Academia is here you guys are a huge focal point and a huge turning point in the series overall how are you guys feeling about this transition and this focus on the villains?

Sonny Strait: Well being a villain, we love it!

Eric Vale: Nervous. I read a lot online about the hopes for what we’re going to do by the fans and it’s only a little bit intimidating.

Eric Vale: I was at a convention this past weekend and I just kept saying “I’m nervous, I’m nervous”

Sonny Strait: Cause you know everybody is watching this thinking “don’t screw this up! this is a very important story arc”

Eric Vale: Yeah! Yeah! I don’t want to screw this up!

Sonny Strait: I’ve read about it. I’m reading the manga. I think I got a grasp on it and if I disappoint you it’s not for lack of trying.

The Nerdy Basement: Eric switching to you since you do voice Shigaraki, he and his League of villains are the focal points of this arc, we spend more time with him and him trying to really become the true successor of All For One. Can you dive into his mindset and thought process throughout the series up until this point and really wanting to become that next big bad of the series?

Eric Vale: Well, it’s the thing I like most about playing the villain. I would say, generally speaking, your good guys are good through and through but the most interesting thing about the bad guy…the bad guy struggles with being good because that good is kind of inherent. So you have that internal struggle and then a character who chooses to be bad instead of good and that struggle is fun for me to portray.

So I got back to that mall scene at the beginning with Deku, Shigaraki putting his hand around Deku’s throat. That was his opportunity but he let him go and that’s that internal struggle that I like. So I’m hoping to see with the more attention that villains are about to get I’m hoping to see more of that play out.

In episode 108 of My Hero Academia we got a glimpse of Shigaraki’s origin, and how he met All For One and Dr. Ujiko. We also learn about the traumatic events that transpired after the awakening of his Quirk which left his family dead. Shigaraki reveals to Dr. Ujiko how he deals with that trauma that he ultimately caused and how those hands he wears around his body (which belong to his family, whom he killed) bring him a sense of calmness despite the boiling rage he feels inside.

Its a form of severe trauma and PTSD and Shigaraki has his own way of dealing with it and is probably not the healthiest of ways nor the right way but he struggles nonetheless, I asked Eric Vale about that so he can also let us inside Tomura Shigaraki’s mind to fully grasp the scope of how he copes and still deals with his trauma.

Eric Vale: I think he’s got the same struggle that anybody does who has gone through a traumatic event or events. Everybody’s life is different and complicated but we all share that bad things happen to us, all of us really. Nobody just walks life between the raindrops and I think the best thing we do is find people who have shared moments like that in our lives and we bring them to us and so we can develop a community, just so happens that this dude’s community is all villains.

I find Shigaraki’s inner conflict somewhat relatable, now that’s not saying that I want to destroy everything that’s in my way just because I’m angry but there is a sense of teenage angst that lies within him, which causes him to get angry and fuels his urge to want to destroy things just because his feelings, his trauma, his PTSD really pisses him off.

Eric Vale: Who hasn’t felt like that as a teenager?

Sonny Strait: The great thing about villains is that you relate to them because they justify everything they do right and that’s why you feel empathy for them and you’re like well he’s trying to justify his actions but you know what makes him a villain is that deep down inside they don’t believe their own justifications, he’s just doing what’s wrong.

We switched over to Sonny who is the English dub voice actor for Re-Destro who made his anime debut this season. While he hasn’t done much yet, his short live appearances throughout the season have set the stage for heavier implications down the line. He holds the ideals and beliefs of Destro, his predecessor near and dear and wants to free society believing that people with Quirks should be free, in other words, he feels that they are oppressed.

He targets the League of Villains as the only group of villains really standing in his way from accomplishing what he wants to accomplish which sets the stage for the league of villains vs the meta liberation army which we saw at the start of just last week.

Without spoiling much Sonny revealed that Re-Destro walks a contradictory line but has also, internally at least, justified his own actions off the strength that he is right which he isn’t, and that his actions are completely wrong. We didn’t hassle Sonny much in regards to spoilers for what’s coming up later with Re-Destro but the manga readers out there definitely know what Re-Destro brings to the table in terms of his villainy.

My Villain Academia (My Hero Academia) is streaming now on Crunchyroll, HULU, and Funimation.