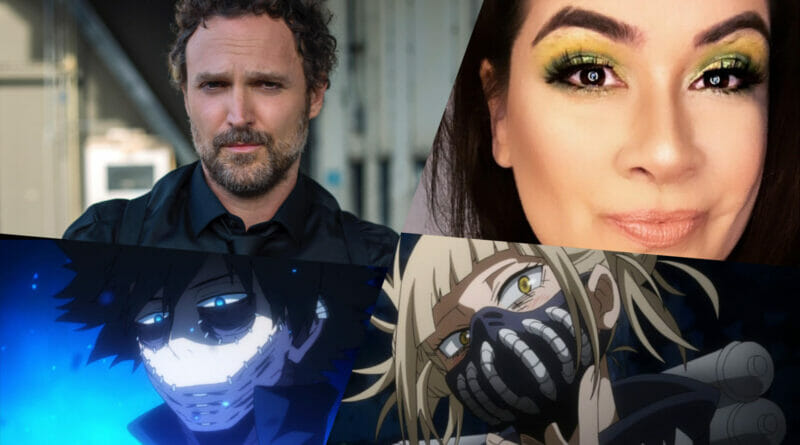 My Villain Academia Interview With Jason Liebrecht and Leah Clark


My Villain Academia has hit the ground running and while we are only two episodes in and now heading to third things are getting intense between the League of Villains and the Meta Liberation Army. As the villains of My Hero Academia take over the series spotlight, we had the chance to sit down and chat with the English dub voices behind Dabi and Himiko Toga, Jason Liebrecht, and Leah Clark respectively.

My Villain Academia is finally here, the villains are the focal point of this arc how excited are you guys for this arc to finally be in the anime?

Jason Liebrecht: I’ve been waiting for this since we started man, in all honesty.

Leah Clark: I know! I don’t why it’s taken so long to get to this point.

My Hero Academia did the unthinkable and put the Endeavor Hero Agency arc ahead of the My Villain Academia arc. Something fans were a little bothered about. Mainly due to the shift in tone and what they were honestly expecting based on what they have read in the manga. In addition, many fans have been vocal about the lack of buildup towards the My Villian Academia arc which heavily focuses on Dabi’s origin and his rise to power. Also missing from the buildup phase for My Villain Academia was the backstory for Re-Destro and the Meta Liberation Army.

From a personal perspective, I’m more than ok with the villains taking the spotlight to close out the season because what occurs in this arc will really round out the season, and will really pave the way for what’s to come with the League of Villains and Class 1-A down the line next season if we do indeed get one.

I took the time to focus on Leah Clark who voices Himiko Toga since she’s a bit more prevalent this season as opposed to Dabi. Himiko had a pretty awesome fight in this past week’s episode so knowing that was coming up I wanted to get pick Leah’s brain a little bit to gain her perspective on what makes Himiko tick and what makes her such a likable villain.

The Nerdy Basement: Himiko is a fan favorite villain who has a lot of cool moments in the anime, what do you think makes her so likable as a character?

Leah Clark: I know this is gonna sound really weird but roll with me. I feel like it’s her relatability. I think that the way she is relatable is she wants to…this is my opinion, of course, I don’t know anything for sure. But she wants to belong. She wants to be in a group and the first group that she feels that she fits into are the villains and she’s going along with that.

But we’ll notice that the people she attaches herself to are the heroes. So I feel like deep down she wants to be part of that hero group but she’s got this something about her that’s keeping her from not belonging to that group so she’s just with who’s accepting her, so I feel like maybe that’s kinda why people like her. It’s a relatable situation ya know everybody wants to belong to someone and if it’s villain cool I’ll go with it.

The Nerdy Basement: Perfect segue to my next question which is about Himiko’s psyche and her twisted perspective of love and friendships. But she also has that cheerful and compassionate side to her, it’s not just all “I want to kill”. She is a villain, however, it’s not all that. She does show compassion and cheerfulness and love for other people, how do you balance that yourself personally as a voice actor in presenting that through the voice of Himiko?

Leah Clark: I’d take off the word voice and I’d just go with actor [laughs] but I find how I relate to a character just in any project and I go with the truth behind that. my choice when I’m acting is that she desperately wants love and wants to belong in any way that she can get it and that’s what I lead as far as my delivery. So if it’s a desperation to go after villains then I lead that with desperation to belong and to be loved and that’s a really powerful emotion so how it comes across. If her desperation and her tactic are to slice you up and take your blood then that’s what we’re doing [laughs].

The Nerdy Basement: Jason switching over to you we’re focusing on Dabi. There’s a lot but not a lot going on with Dabi this season. He’s more in the shadows working with Hawks and coming out a little more with his personal vendetta against Endeavor. What can fans really look forward to with those two specific relationships and dynamics he has going on?

Jason Liebrecht: I mean honest man I don’t know because we are no made privy prior to airing but when we record obv we get some ideas to what’s going to happen and that happens before it airs but yeah man I am just as excited as any fan to figure out what’s up. My dude plays his cards close to the chest and he’s given away very little throughout his entire time in the series so super gradual reveal we still don’t know what the motivations are I still don’t know what the motivations are.

The Nerdy Basement: I feel bad knowing because you guys are kept out of the loop [laughs]

The Nerdy Basement: There are some nice surprises in there, obviously we’re just talking about the anime itself, we’re not talking about anything else but for those who do know, they do know.

Jason Liebrecht: You are right about that my friend! [laughs]

The Nerdy Basement: Leah, same question for you, what can fans really look forward to with Himiko this season? We’ve only gotten a glimpse of her in last week’s episode, she’s got a new outfit, she’s showing her love for the heroes and wanting to be what she loves, what can fans look forward to?

Leah Clark: Gosh [laughs] I think more of her [laughs], that what I’m looking forward to.

Leah Clark: I’m hoping we get to dive a little more into the depth of her and maybe understanding why she’s the way she is.

Jason Liebrecht: I suspect when you talk to the villain, the people who play the villains, you’re gonna get that sort of answer. A lot of it it’s like “we want to know what’s up?” just as much as anyone else, “what made him this way?”

The Nerdy Basement: What are some of your favorite moments from your respective characters throughout the entirety of My Hero Academia so far?

Leah Clark: I think one of my favorite moments is the fight with Uraraka just getting to hear reveal how she wants to be more like the people she loves, I thought that was interesting for me to learn about her and with what intensity that was.

Jason Liebrecht: One of the first scenes that stick with me from the very beginning is that whole episode that dealt with the kidnapping of Bakugo and that shot, that overhead shot that kind swooped into the forest with Dabi kinda leaning into that tree and the blue flames just all around that’s when I got super hyped about the fact that I was getting to play this character I was like oh man he is super cool. It’s very gratifying to be playing a character like that.

My Villain Academia (My Hero Academia) is streaming now on Crunchyroll, HULU, and Funimation.