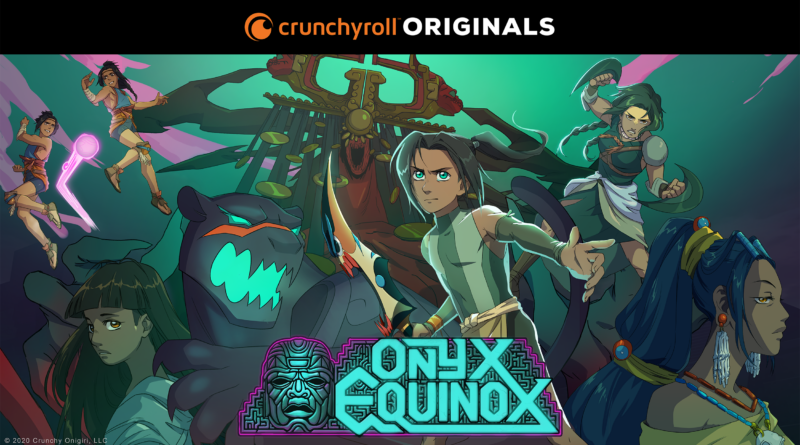 “Onyx Equinox” follows a young Aztec boy as he journeys across ancient Mesoamerica to save humanity. Sofia Alexander serves as creator and showrunner and will be appearing across a number of panels this weekend at Virtual Crunchyroll Expo.

Crunchyroll announced today that the upcoming Crunchyroll Original series “Onyx Equinox” will premiere Saturday, November 21. The series will be dubbed in Spanish, Brazilian Portuguese, French, and German at launch. To celebrate this announcement, Crunchyroll also premiered a brand new trailer to invite fans into the world of “Onyx Equinox” and introduce the main characters:

Crunchyroll also announced the English voice cast for “Onyx Equinox,” which includes a mix of Latinx and up and coming voice talent:

Oliva Brown is the voice of Izel, humanity’s reluctant hero, in “Onyx Equinox.” Her past credits include Murray in The Beefcake Boys for Dreamworks TV, Baker in Jell-O Wobz for Jell-O and Dreamworks TV, Emily in the game Colony 42, and Isabelle in the game AFK Arena.

Alejandro Vargas-Lugo is the voice of Yaotl, the jaguar-like emissary of Tezcatlipoca who accompanies Izel in “Onyx Equinox.” Vargas-Lugo has been a voice dubbing actor in Spanish since 1988, lending his voice to films and television series including “Harry Potter and the Chamber of Secrets” and “Harry Potter and the Prisoner of Askaban” as Lucius Malfoy, “Secret of the Sahara” as El Halem, “Tombstone,” “Balto” as Steele, and “The Grim Adventures of Billy & Mandy” as Grim among many others. English voice dub credits include “Tú o Nadie” and “Fariña.”

Born in Cali, Colombia, Carolina Ravassa has appeared on The Affair opposite Dominic West, Mr. Robot with Bobby Cannavale & Rami Malek, and has done a few shorts with Reggie Watts. She produced, directed, and starred in the webseries Hispanglosaxon, which won an Imagen Award for Best Webseries. She is known for her voice work in the video games Overwatch (Sombra), Valorant (Raze), Grand Theft Auto V (Taliana Martinez), Max Payne III, Red Dead Redemption II, Just Cause 4, and voices on Big City Greens (Disney), Victor and Valentino (Cartoon Network), Loud House (Nickelodeon) and Netflix. She also worked on Step Up 3-D and Maybe Tomorrow.

Patrick Pedrazza is the voice of Yun, K’in’s more individualistic twin and the emotional core of Izel’s group, in “Onyx Equinox.” Pedrazza has worked on a variety of video games and TV series including “Wasteland 3” “Care Bears Unlock the Magic,” “Brawl Stars” and “Rescue Heroes.”

Juan Arturo Maldonado is the voice of K’in, Yun’s mischievous, risk-taking twin who often takes jokes too far in “Onyx Equinox.” Born in Los Angeles, Juan’s first-generation immigrant activist family raised him in a “Spanish Only” household and today Juan is completely bilingual. He is passionate about entertainment, writing, and social activism.

Kimberly Woods is the voice of Xanastaku, a priestess in Izel’s party who desires to redeem her dark past in “Onyx Equinox.” Woods has worked extensively in original animation, anime, and video game series, appearing as Polly in Nickelodeon’s It’s Pony, Tiese in Sword Art Online, Naho & Hinaki in Demon Slayer: Kimetsu no Yaiba, Ren Isuzu in Magia Record: Puella Magi Madoka Magica Side Story and in games including Blade & Soul and Pokemon Masters among others. Woods has also appeared in HBO’s Westworld.

Arin Hanson will voice Tezcatlipoca on the upcoming Crunchyroll Original series “Onyx Equinox.” Hanson is an animator, voice actor, and internet personality also known online as Egoraptor, and as the co-founder of the popular YouTube web series “Game Grumps.” Past credits include Gateaux and Fibby on the television series “Mighty Magiswords” and Mancubus on the video game “Borderlands 3.

Castulo Guerra will voice Mictlantecuhtli on “Onyx Equinox.” Guerra is an Argentinian actor with numerous stage, television, and film credits including “Jane the Virgin,” “Deathstroke: Knights & Dragons,” “Dallas,” and the New York Shakespeare Festival’s “Othello” alongside Raul Julia and Richard Dreyfuss, and “Coriolanus” with Morgan Freeman and Denzel Washington among many others.

Zeus Mendoza is the voice of Quetzalcoatl in “Onyx Equinox.” He has worked extensively across film, television, and theatre including feature films “Passengers,” “Puss in Boots,” “Beverly Hills Chihuahua,” “Ballad of a Soldier,” and “Land of Milk and Honey.” Television credits include “The Rookie,” “Days of Our Lives,” “CSI” and “CSI: Miami.”

Fayna Sanchez – voice of The Healer

Fayna Sanchez will voice The Healer on “Onyx Equinox.” Her past acting and appearance credits include Dollface on Hulu, Angie Tribeca on TBS. Sanchez is also the host of the horror podcast ‘Nocturna’ from Earbud Theatre’s Tales From The Dead Of Night. Sanchez also has a number of theatrical credits including ‘Veronica’ in Stephen Adly Guirgis’ The Motherfucker With The Hat, which earned an award for “Best Ensemble Theatre” & “Pick Of The Fringe” for the Hollywood Fringe Festival, alongside a number of national commercials.

Sofia Alexander is the executive producer and show creator of Crunchyroll’s upcoming original series “Onyx Equinox,” which follows a young boy through his epic journey across Mesoamerica to save humanity from the gods. In the series, Alexander voices the characters Nelli, Izel’s sister, and greatest source of motivation, K’i’ik, Izel’s weapon that grows by consuming blood, and Meque, a type of axolotl with mysterious, magical power.

Alexander got her start in the animation industry by freelancing for Cartoon Network’s reboot of “The Powerpuff Girls.” She has since worked as a storyboard artist for Hasbro’s “Stretch Armstrong and the Flex Fighters,” Nickelodeon’s “Invader Zim: Enter the Florpus,” and finally back to Cartoon Network for “Infinity Train.” She has also freelanced doing concepts for Disney Imagineering.

Alexander was born in Cancún, Quintana Roo. Her family moved to Dallas, Texas where she finished high
school and later pursued her art degree in Savannah, Georgia. She currently resides in Los Angeles, California.

“Onyx Equinox” follows a young Aztec boy named Izel who is saved from death by the gods and is chosen to act as ‘humanity’s champion,’ forced to discard his apathy toward his fellow man and prove humanity’s potential on a journey that will take him across ancient Mesoamerica.

“Onyx Equinox” is one of many Crunchyroll Original series that have launched so far this year. The show was created by executive producer and showrunner Sofia Alexander. Fans can learn even more about “Onyx Equinox” this weekend at Virtual Crunchyroll Expo through these panel discussions with the creator and staff: