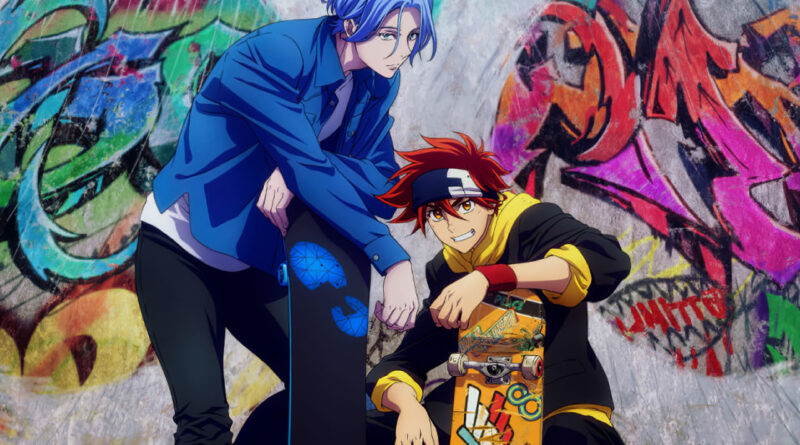 
January is kicking 2021 off with a stellar lineup of new original and returning anime series. Whether it’s the highly anticipated return of The Promised Neverland, or Dr. Stone Stone Wars, or new original anime series like Horimaya, we guide you through what you can watch this coming month in the Winter Anime Season.

Horimiya is about Izumi Moriyama, a seemingly introverted and gloomy boy, and his outgoing and popular classmate, Kyoko Hori. It’s very funny and sweet at times, with a great cast of characters. I’m expecting the anime to be just as delightful as the manga. Check out the official trailer and official synopsis for the anime series below. Horiyima premieres on January 9 on Funimation.

Admired at school for her friendly attitude and academic achievements, high school student Kyouko Hori has been hiding another side to herself. With her parents often away from home due to work, Hori also has to look after her younger brother and do the housework, leaving no opportunities to make friends and socialize outside of school. Meanwhile, Izumi Miyamura is seen as a brooding, glasses-wearing, otaku. In reality, he is a gentle person hopeless at studying. He also has nine piercings hidden behind his long hair and a tattoo along his back and left shoulder.

If you’re looking for a new supernatural shounen anime to watch I think this one is a winner. Kusaka Kabane lives a bit of a miserable life in a rural village where he does many grueling tasks not fit for a child while shunned and scorned. After meeting Detective Inugami he’s introduced to a whole new supernatural world filled with ghouls, foxes, and anything in between. Coming January 10th.

When a series of animal bodies that rot away after a single night begin appearing in a remote mountain village, Inugami, a detective from Tokyo who specializes in the occult, is called to investigate. While working the case, he befriends a strange boy who works in the field every day instead of going to school. Shunned by his peers and nicknamed “Dorota-bou” after a yokai that lives in the mud, he helps Inugami uncover the truth behind the killings—but supernatural forces are at work, and while Dorota-bou is just a nickname, it might not be the only thing about the boy that isn’t human.

Most people are probably familiar with The Promised Neverland, but for those who aren’t and want to catch up for the second season here’s a brief synopsis. Promised Neverland stars Emma, an orphan as she discovers that her world is not what she thought as she and her friend battle evils previously unknown. It’s like an anime Plague Dogs just with kids instead of dogs. Coming January 7th.

Beastars takes place in a world divided into prey and predator categories. A complex world with many gray areas, the audience watches Legoshi navigate this world as he matures and dives deeper into the seedy underbelly of society. Coming January 5th to Netflix Japan.

Another insanely popular continuation, Re:Zero’s hero is Subaru Natsuki is a NEET who finds himself in a high fantasy world where he has to survive multiple brutal murders only to be revived mysteriously. Coming January 6th.

That Time I Got Reincarnated As a Slime Season 2

If you’re looking for a more light-hearted isekai, Time I got reincarnated into a slime is a good pick. Satoru Mikami dies one day and is transported to a fantastical world reincarnated as a slime named Rimuru Tempest. He gains many new allies and enemies as he explores this new world. Coming January 12th.

In a world where dangerous creatures named “Neighbors” destroy cities, two boys one, a humanoid neighbor the other, a trainee in the organization meant to destroy neighbors navigate their world. Coming January 9th.

A light novel adaptation about a girl who is reincarnated into a spider in a dungeon. I don’t have much else to say about this except that the trailer looks interesting since I don’t often see women as main characters in isekai which piques my interest. Coming January 8th.

In this new season we see Senkū Ishigami go head to head with Tsukasa Shishiō who’s ideal world opposes Senku’s. Senku’s genius will be put to the test as he battles against straight brawn. Coming January 14th.

This one follows a group of high school boys as they compete in figure skating competitions. Coming January 10th.

No, not another figure skating anime. This one follows Reki as he gets transfer student Langa sucked into the world of “S”, a highly secret and dangerous downhill skateboarding race that takes place in an abandoned mine. Coming January 8th.

The series follows the daily life of a high school student, Futaro Uesugi, who’s hired as a private tutor for a group of quintuplets who all perform poorly at school. Although I haven’t watched this one I heard that it is very funny and enjoyable so I might actually try to catch up to watch season two. Coming January 7th.

I’m getting real Madoka vibes from the synopsis which is slightly concerning. But I’m curious so I’ll be watching this one too. Led by a mysterious voice while on a midnight stroll, 14-year-old girl Ai Ooto picks up an egg. The voice coaxes her: “If you want to change the future, you only need to choose now. Now, believe in yourself and break the egg.” Coming January 12th.

This one looks like it will be really funny so I’m also looking forward to it. Heaven’s animal design team is there to, you guessed it, design Earth’s animals. It seems like most of the humor will come from the employees dealing with the unreasonable requests of their client: God. Heaven functioning as a company is also a pretty good gag in itself. Coming January 7th.