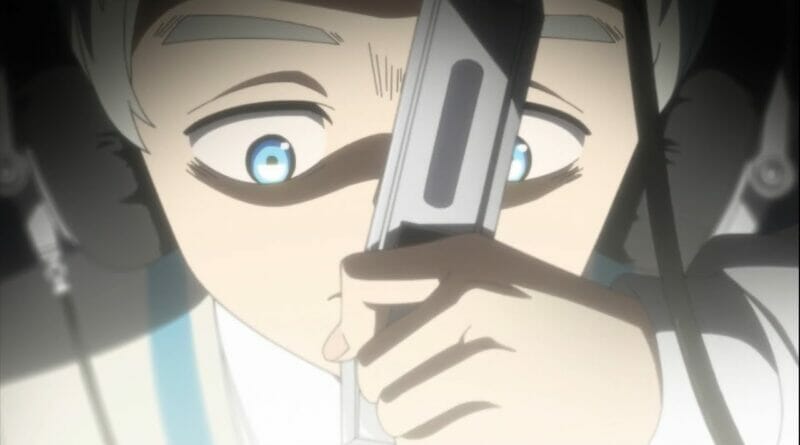 The Promised Neverland’s second season has been rather weak. After a few episodes the series decided to skip what many manga readers consider to be the best arc of the series, as well as a time jump that reintroduced both Mother Isabella and Norman who up until that point, his livelihood was uncertain. These past few episodes have been the relationship between Norman and Emma teeter back and forth about what’s right and what’s wrong and whether or not the demons should be annihilated or saved in an attempt to try to coexist peacefully.

As we see both Emma and Norman stand on their respective grounds, they decide to come to common ground and conjure up a deal. Find Mujika and Sonju, bring them to Norman and he will refrain from killing the demons within the city. Unbeknownst to Emma, Norman was still sticking to his original plan and essentially agreed to Emma’s deal to temporarily get her out of the picture so he can execute mass murder.

Whether you keep up with us on Twitter or not, or have read most of my reviews of The Promised Neverland Season 2, you already know where I stand with this season so far. However, I have to admit that this is the best episode of this season so far. Reason being is the beginning of the episode in which we learn more about Norman’s time at the demon headquarters after he was shipped, how he managed to escape, put together a team, steal the intel he needed and go on about carrying out his plans to kill all of the demons.

From this perspective, you can kind of understand where Norman is coming from. The testing and countless hours of experimentations and lobotomization can drive anyone insane. And ultimately, made Norman’s time in the Grace Field house like paradise. They had a roof over their heads, they were fed, nurtured, had “siblings” and were able to have a semblance of a normal life for kids their age. So being shipped out and seeing how things are 10x worse can drive anyone over the edge and push them to want total extinction of those who are doing the damage.

Unfortunately, along the way Norman loses sight of the fight they were planning to fight from the very beginning. Declaring that he is willing to become either a God or a Devil in order to bring total annihilation. Sadly when he reunites with Emma, those respective conflicts of interest clash and leads to Norman pursuing his goal preemptively while Emma, Ray, and the rest of the group are battling a forest demon while searching for Sonju and Mujika who just so happen to be at the right place at the right time and save Emma from being eaten.

While the episode is great and has finally delivered a really dark, grim and bloody episode it has one of the most awkward moments in anime history, in my opinion. As Norman is about to kill a young demon girl, her grandfather calls out for her and stops Norman in his tracks. Heavily reminiscent of the Batman v Superman Martha moment.

Although Norman wavers after this, he manages to pull himself together momentarily and tries to kill the old demon, who turned out to be a demon who was unable to degenerate back even after being hit with the poison Norman created. Hence why he wants Sonju and Mujika out of the way, since their blood prevents them from reverting back to demons who need to eat humans in order to survive. The old demon then provides his granddaughter with a sample of his blood in order to save her and she reverts back to a demon with a humanoid form.

The sad part about this all isn’t that Norman lost sight of what the overall goal was or that he had a turn for the worse. The sad part of it all is that deep down inside Norman’s core still lies a scared child just reacting out of pure fear. I personally feel like this is where The Promised Neverland shines the most. It’s showing that vulnerability and how we as humans and our reactions to everything are always based on fear and emotion.

We can tie this back to Mother Isabella and why she agreed to become a mother at the Grace Field House initially, which was to protect her natural born son, Ray. This allowed her to keep him close, nurtur him and raise him even if he was being shipped out when he got older. This is also why she also agrees to hunt the children down again after her capture.

The real downer is that The Promised Neverland has really delivered much this season especially with the series skipping the Goldy Pond Arc. A lot of creative freedom has been given to the anime series which is why we got that Martha moment with Norman in this episode but as I mentioned above this is prob the best episode of the season so far. I can only hope that whatever is coming next for The Promised Neverland delivers on the same level as what we got with the first season. Especially as an anime-only watcher of The Promised Neverland.

The Promised Neverland Season 2 is streaming now on Hulu and Crunchyroll.