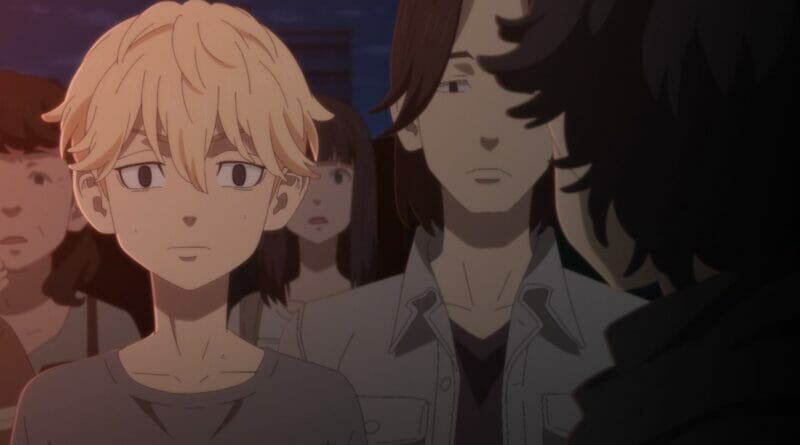 Tokyo Revengers Episode 16 – Once Upon A Time (Review)

The latest episode of Tokyo Revengers takes a dark turn and sheds light on the beef between founding Toman member Kazutora and current Toman Commander Mikey. The inner working of Toman have not been great as of recently and while things between Draken and Mikey have cooled down, bitterness between founding member Baji and Mikey have only grown bigger thus causing Baji to leave Toman and join up the Headless Angels known as Valhalla. After bringing Takemichi to Baji’s initiation ceremony, Takemichi is told about the turmoil between Kazutora and Mikey; and through a flashback, we learn what caused that turmoil.

During this flashback, we meet a much younger version of the Tokyo Manji Gang as they make their way to the beach for a day of fun. As the group rides together on their bikes, Mikey is far behind the group as he cannot keep up, as he is riding a moped as opposed to a regular bike like the rest of his gang. Draken and the rest of Toman give Mikey a bit of a hard time about his moped, despite that, as per usual, Mikey stands his ground and shows his love for his moped.

Unfortunately, the group of met approached by another gang who also decide to give Mikey a hard time about his moped while also asserting their superiority in the territory. They threaten Toman and also threaten to destroy Mikey’s moped if they come across them again. Mikey replies with his own threat by saying if they do as much to lay a scratch on his moped, he’ll kill them.

As the gang rides off, Mikey’s group pokes more fun at him due to his moped being the cause of the gang approaching them. To make matters worse, Mikey’s moped has also run out of gas. The group decides to play a game of rock-paper-scissors to decide who goes to refill the moped’s gas tank. A responsibility that lands in the hands of Baji. Baji ends up running into the gang they met earlier in the episode and gets jumped while defending Mikey’s moped. Mikey then comes to his aid and apologizes for the pain he caused him due to his moped and in turn “destroys” it and kicks the gang’s ass.

It is now August 13, 2003. Baji and Kazutora are out and about. Kazutora tells Baji that he wants to give Mikey a gift for his birthday since it’s soon coming up. Seeing how he no longer has the moped, he tells Baji he wants to get Mikey a CB250T motorcycle as a gift to Mikey. Wondering how they will get their hands on a bike like that, Kazutora pulls up to a local motorcycle shop and tells Baji that they will steal the CB250T from the shop. Since they are too young to afford one, their best option is to steal it.

Plans to steal the motorcycle proceed as planned until Baji is approached by Sano Shinichiro, the owner of the shop. Shinichiro and Baji recognize each other and they both question their presence in the shop. Shinichiro reveals that Baji is stealing from his shop, as Kazutora returns to Baji he attacks Shinichiro with a pair of bolt cutters, striking him in the back of the head.

Much to Baji’s shock, as he just learned of who they were robbing and who Kazutora just attacked, he reveals to Kazutora that Shinichiro is no longer breathing and he just attacked Mikey’s older brother. In a panicked state, Kazutora falls into immediate denial and mental breakdown and blames Mikey for his actions; in turn devoting his next actions to killing Mikey. Mikey arrives on the scene and sees Baji and Kazutora in handcuffs. He asks Baji what happened and Baji can do nothing more than to painfully apologize to Mikey for what has just happened. On the other hand, Kazutora is just mumbling “kill Mikey” to himself.

Now many might find this episode a bit slow, and/or filler-y which is fine. But this episode shines a bright light on what caused the initial wave of inner turmoil within Toman and caused Kazutora to leave Toman and join up with Valhalla. Now we still need to know what happens after this revelation and how Mikey handled such betrayal, even if it was unintentional. We still need to see if and how Mikey forgives both Baji and Kazutora or if he even forgives Kazutora at all. We also need to see if Kazutora’s exit was his own decision as well.

There’s so much about Tokyo Revengers that really makes it stand out. I can admit that as we reported about Tokyo Revengers, we didn’t jump into the series as soon as it premiered. I’m glad that we finally got around to watching it and I have not been able to look away from how good this series is. I can admit that this week’s episode of Tokyo Revengers does feel like a filler but as I mentioned, it sheds light on some of the early inner turmoil within Toman. How things play out remains to be seen!