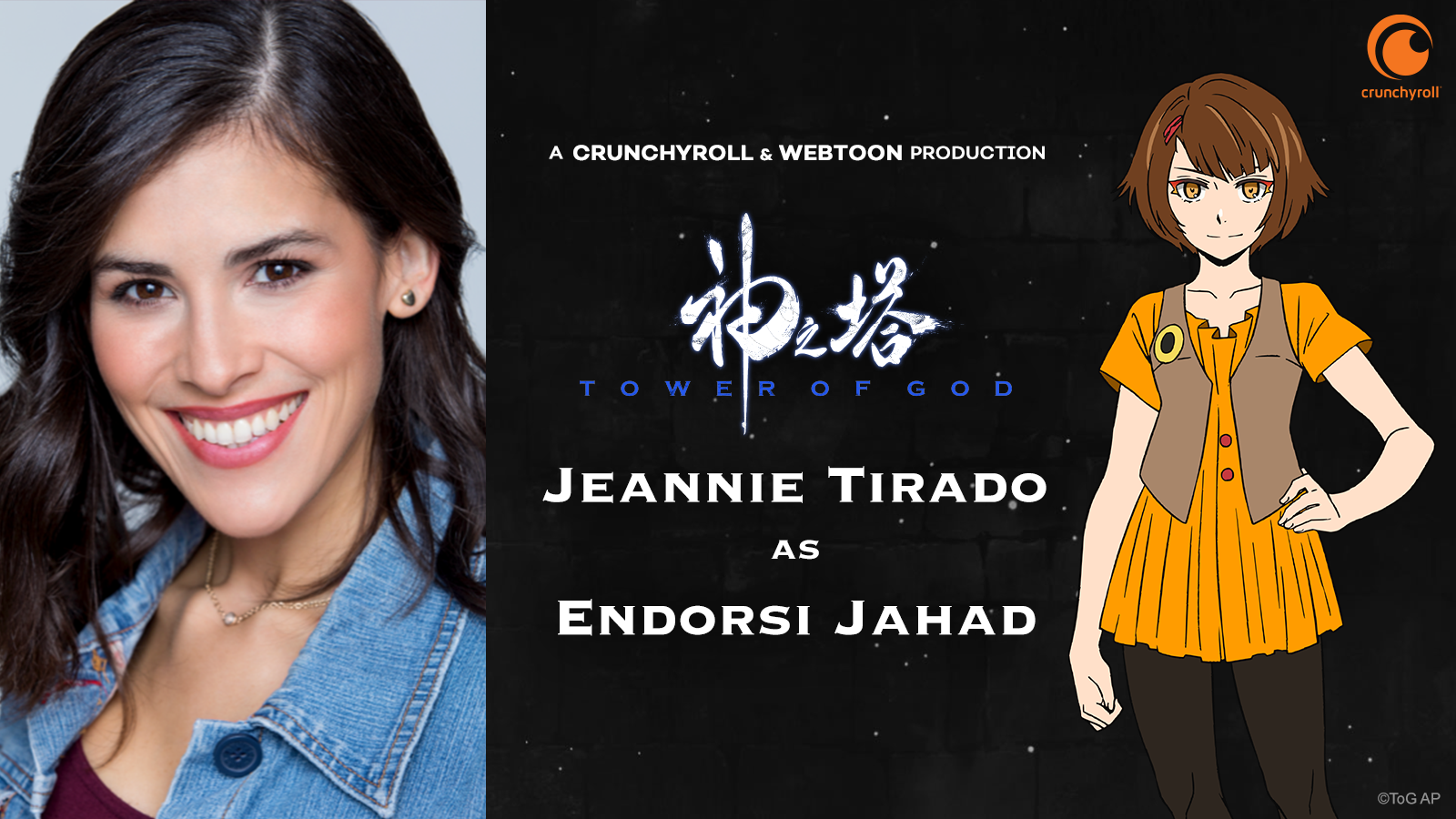 
We would like to welcome you all back to yet another exclusive Tower of God interview with Jeannie Tirado who voices Endorsi Jahad. Just like Johnny Yong Bosch, Jeannie Tirado is also an anime voice acting veteran with a vastly long list of characters she’s played. Voicing characters like Koala in One Piece: Stampede, Fana in Black Clover, Norman in The Promised Neverland, and Young Takashi in Netflix’s Ghost in the Shell SAC_2045. With her long list of anime characters, Tirado shows her unique voice acting talent and incredible range, something she mentions directly in this interview.

Read on ahead and check out our exclusive interview with Jeannie Tirado as we discuss the character of Endorsi Jahad, one of Jahad’s Princesses and the dramatic betrayals and the burden one carries of being a Princess of Jahad. Those who have watched Tower of God so far, most specifically sub viewers have already seen these topics play out. For those who are exclusively watching it dubbed have yet to see some these topics fully play out.

Hello Jeannie, I want to formally introduce myself. My name is Osvaldo J. Madera of The Nerdy Basement. I want to thank you for your time and consideration and most importantly this interview opportunity. I appreciate you taking time out of your day to answer my questions.

TNB: This is one of my most basic questions for all of my interviews, mostly because not everyone is aware of who the voice actors are because they’re behind an animated character of sorts and things like that. For those who are unaware of you or who are just discovering you for the first time, tell us about yourself and how’d you get your start in the industry?

Jeannie: I was born and raised in Orlando, Florida, which is home to Disney World. I got my drive for voice acting from Disney. I was a part of that 90s Disney renaissance. I can still quote all of “The Little Mermaid,” and “Beauty and the Beast.” At first, I wanted to be one of the princesses in the Disney parks and then I realized that I actually wanted to be the princess’s voice. I have a degree in music. The first time I was in a recording booth, it was actually for music and recording songs.

TNB: Just like the rest of your fellow Tower of God cast members, you have a vastly long resume when it comes to voicing anime characters. Which of those characters were you able to relate to the most?

Jeannie: I love to play the fangirls who are super passionate! You can see that side of me in my roles as Katarina Claes in “My Next Life as a Villainess: All Routes Lead to Doom!” and Kae Serinuma in “Kiss Him, Not Me.” Those characters are the most like me. I’ve played the cool chicks, but that’s really not me!

TNB: Ok, so switching gears. Tower of God. Endorsi Jahad. Princess of Jahad. Family drama. Betrayal. A breach in accords. Revenge. Empathy. Let me have it!!

TNB: I’m mostly saying let me have it because of the weird kind of tough love but also dismissive aunt/niece relationship between Endorsi and Anaak. Both princesses of Jahad. The only difference, one is was born into that title, and the other one earned it. Potential spoiler territory, how does that affect that aunt/niece relationship between Endorsi and Anaak?

Jeannie: There’s a great scene with both Endorsi and Anaak later in the season – I won’t spoil it but their dynamic in this particular fight was a lot of fun. I’m also a little sister myself and in my mind, Endorsi is the bigger sister. I really related to Anaak at first; she’s trying so hard to prove herself. I want to play the poor girl fighting for who she is! That said, this role really gave me insight into how my sister feels. Tapping into that side of Endorsi helped me figure out that family dynamic.

TNB: While we’ve seen the Endorsi and Anaak “family dynamic” play out in later episodes in the Japanese version of the show. Something we have yet to see in the dubbed version. What can fans really expect from this relationship down the line as the season progresses, especially from Endorsi’s perspective?

Jeannie: The characters in “Tower of God” are so dynamic, and you meet Endorsi in battle so I thought I had her pegged. Then you learn her backstory and you learn that there is so much more to this character. Especially when I was doing scenes with Anaak, I didn’t want to go too far to ensure there was still a redemption arc for Endorsi. I wanted to make sure there was growth for her.

TNB: This is more of a personal question for me simply because you’ve done voice work on Beyblade: Burst Turbo. I recently got my four, nearly five-year-old son into the series. Binged it and rewatched it over at least twice. He absolutely loves the series, probably more than I personally loved the original Beyblade series growing up in the 2000s. Any info on a new season? A new series?

Jeannie: Nothing I can share at the moment, but I will always be excited for more great anime. Check my social handles for updates along the way – Twitter and Instagram.

TNB: With that being said Jeannie, I would like to thank you for all of your time and the opportunity to interview you, even remotely. I had a blast coming up with these questions for you and I can’t wait to see more of you in Tower of God. Such a great series so far and I’m enjoying it as much as fans are.

Tower of God is a Crunchyroll Original in collaboration with WebToon. You can catch Jeannie Tirado as Endorsi Jahad in Tower of God streaming exclusively both subbed and dubbed on Crunchyroll.

For more exclusive interviews, anime reviews, news, trailers, and updates make sure to keep it locked right here at The Nerdy Basement. While you’re here check out our exclusive interview with Johnny Yong Bosch, and consider supporting us on Patreon.