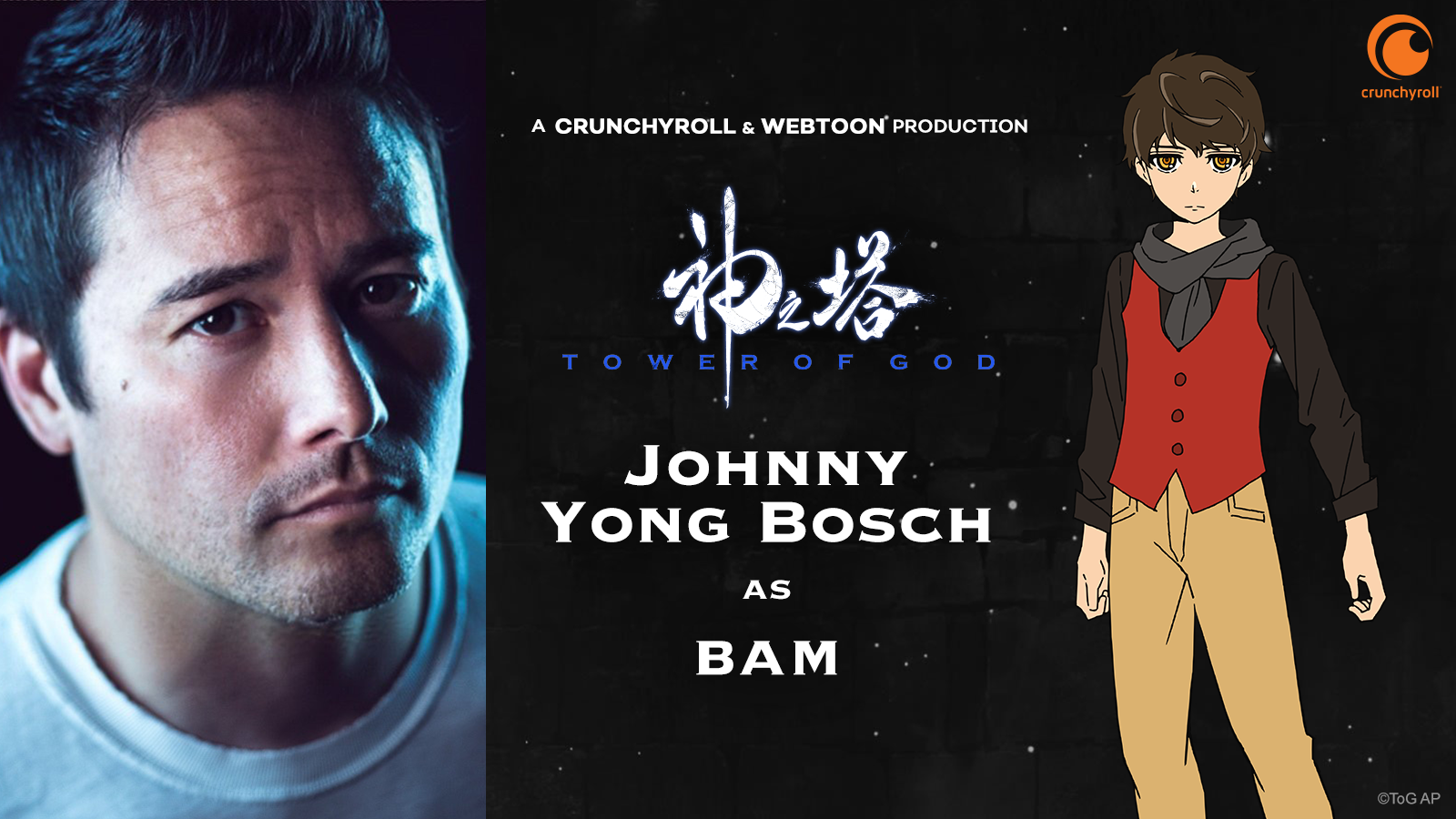 
One of the many Crunchyroll Originals hitting the scene during the Spring Anime Season is Tower of God. As part of our partnership and extensive yet ever-growing content coverage with Crunchyroll and Tower of God. We were offered the opportunity to review anime veteran Johnny Yong Bosch.

Many might know him as the second Black Ranger Adam Park as seen in n the Mighty Morphin Power Rangers series and its feature film which was released in 1995. Bosch has a vast resume under his belt voicing iconic anime characters like Ichigo Kurosaki (Bleach), Vash the Stampede (Trigun), and most recently Giyuu Tomioka in Demon Slayer: Kimetsu no Yaiba and the villain Nine in My Hero Academia: Heroes Rising.

Read on ahead and check out our exclusive interview with Johnny Yong Bosch as we discuss the character of Bam, his unlikely allies, and what lessons you can learn from watching anime!

Hello Johnny, I want to formally introduce myself. My name is Osvaldo J. Madera of The Nerdy Basement. I want to thank you in advance for your time and consideration and most importantly this interview opportunity. I appreciate you taking time out of your day to answer my questions.

TNB: While I’m aware of your long anime resume, me being of a fan of yours dates all the way back to the early 90s watching you on tv as the Black Ranger in the Power Rangers tv series, the film and eventually moving into Power Rangers Turbo and all that (I will never forget your disappointment in being a frog in the Power Rangers film lol), how did those early acting years help you and mold you into becoming the multi-talented actor you’ve become today?

Johnny: I basically screwed up a lot and eventually started learning what to do, sorta.

TNB: Let’s talk about your current anime project Tower of God, you voice The 25th Bam (Bam) in the series. A young boy in search of Rachel who has essentially moved onto the other side. Tell us more about his journey throughout the series and his search for Rachel and how deep is that connection to her.

Johnny: Without spoilers, there’s a lot more to come.

TNB: What about his relationship with Khun and Rak? An odd trio but they seem to make things work despite how different everyone is internally and externally.

Johnny: These are the guys you want on your squad. I imagine in our world they’d be gaming with each other online.

TNB: What attracted you to the project and more specifically the character of Bam?

Johnny: For me, it felt poetic in the beginning, and then so many questions were raised within the story and now I’m curious to find out the answers.

TNB: I always have the tendency of telling people who do and do not watch anime, whether it’s on Twitter or in real life, that anime teaches some of life’s best lessons. What life lessons has anime taught you?

TNB: What do you think fans watching the Tower of God can learn from the series?

Johnny: It’s probably gonna be different for everyone. I just hope everyone enjoys it.

TNB: You’ve done some remote voice acting for Tower of God, correct? How’s that been going for you?

Johnny: After my first session, we were put on a stay-at-home order. My following sessions were all work-from-home. Fortunately for me, I have a professional set up at home.

I want to once again thank you for your time and the opportunity, Johnny. I hope we can do this again down the line!

Tower of God is a Crunchyroll Original in collaboration with WebToon. You can catch Johnny Yong Bosch as Bam in Tower of God streaming both subbed and dubbed exclusively on Crunchyroll.

For more exclusive interviews, anime reviews, news, trailers, and updates make sure to keep it locked right here at The Nerdy Basement.