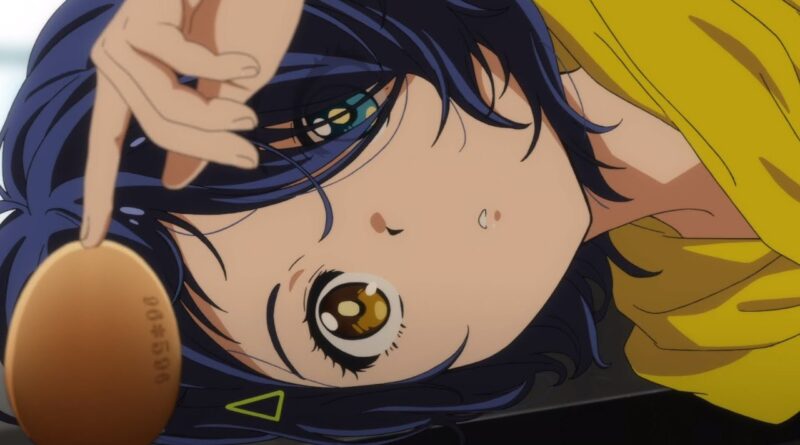 This episode begins with Ai talking to Neiru, the girl introduced in the last episode. Ai’s personality is very different from the first episode. She is bubbly and positive opposite of Neiru, who comes across as cool and aloof. We learn that Neiru is trying to save her sister. Ai’s character shift was a bit jarring because she seemed like a completely different person from the previous episode. You could argue that the climax of the previous episode was where she changed but it was too drastic for me to really appreciate her new personality.

In this episode, she has to save a girl named Suzuhara Minami, who is a young gymnast without much confidence and an abusive coach. I think it’s safe to assume that the girls that hatch out of the eggs have committed suicide due to the pressures they dealt with in real life. The monsters that appear are manifestations of their “trauma”. The monster this time is the girl’s coach. I liked this episode because it shows that you can stand up to your abusers and that no one deserves to be treated poorly or bullied.

The character design for the monster in this episode was interesting because of the way it juxtaposed with the art style. It was colorful but its design was definitely more on the adult side. The fight scene in this episode showed off the animation, I was very impressed since the fight scene from the first episode was pretty lackluster. It was actually exciting watching Ai get her footing. I was rooting for Ai while watching her get back up and keep trying despite getting knocked down.

Again the episode ends with the girl Ai “saved” disappearing into a cloud of ash. It leaves a very bittersweet feeling. We then see Ai again in the next scene where we see that she is in a hospital, the same one that Neiru is being treated in. It seems they both had rough times this go around but Neiru had it a bit harder in this case. By the end, we see the girls bond on the rooftop as Ai manages to break down Neiru’s cold exterior just a bit.

I enjoyed this episode much more than the debut episode. The plot was more grounding and the themes such as bullying, suicide, and trauma became more clear for me. The moment that struck a chord with me was the scene where Koito willingly let herself get harassed by the girls in their class so Ai could get video evidence of the bullying. But because Ai was too scared she ended up not getting usable footage.

The look on Koito’s face was both unreadable and telling. She acts as good motivation for Ai’s development, pushing her to be brave and courageous. I can’t wait for them to introduce more characters because that’s where Ai’s character really shines even if her change was a bit abrupt.