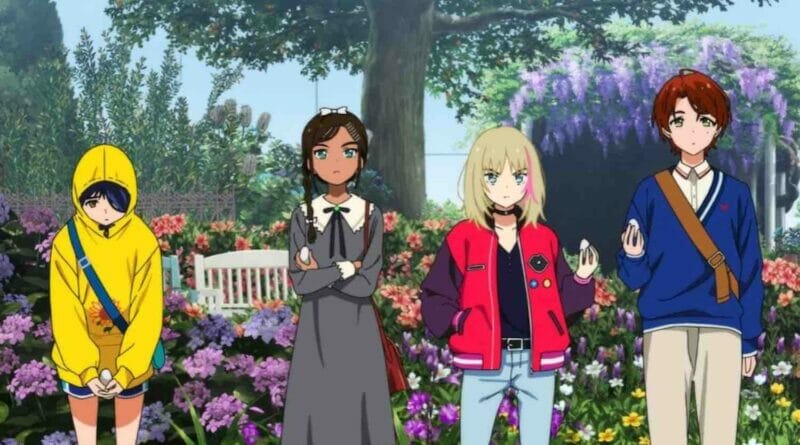 There was a lot that happened in this episode of Wonder Egg Priority; a certain revelation, in particular, was pretty shocking and left me wondering where they’ll go from here. The episode begins with Ai once again running to protect a girl. They are running away from the Seeno Evils which turn into Haters. These Haters are stronger and now actively hunting after the girls. Ai is protecting a girl named Yae who believes that she can see spirits and curses. In real life people probably thought she was a chuunibyou, someone with eighth-grade syndrome, that’s definitely what I thought she was.

In the real world, we see Ai and her mother eating breakfast where her mother mentions Mr. Sawaki, who remains suspicious in Ai’s opinion because of his involvement in Koito’s death. It’s understandable that Ai is hesitant to have him around when she doesn’t know exactly how he factors into Koito’s death. They get necklaces from Acca and Ura-Acca that act as helpers to protect them against the Haters. Now it’s really a magical girl anime since they have animal sidekicks.

The girls have a very tense conversation about Mr. Sawaki when it’s revealed that he and Ai’s mother wish to date. Her mom seems very understanding about Ai’s situation. It’s not entirely obvious why Ai would be against it, except it turns out it’s because she’s in love with Mr. Sawaki. This is the conclusion that Neiru naturally comes to, and honestly Riwa’s reaction was the highlight of the episode.

I’m not sure how to feel about this reveal though, because It feels like this anime wants to tackle big relevant topics but just always falls a little short of doing it. Why has Ai been in love with Mr. Sawaki, why not just have him be involved in Koito’s death? Adding this layer makes me wary of the direction this anime is headed.

Despite this, the episode was still quite good as we see Ai battle a formidable foe, one that only Yae can see. It was a tense battle and I thought she wasn’t going to make it but she defeats it after declaring with an anguished look on her face that she doesn’t like Mr. Sawaki. This is the first time one of the trauma monsters was defeated in such a calm way, it made me wonder if they are aware of what they are doing.

The episode ends with Ai running through the rain after another realization, that she wants to go back to school. She tells Mr. Sawaki and it looks like this is a new beginning for Ai as she moves her hair out of her face and smiles wide. While this episode was good I will definitely be paying close attention to this Mr. Sawaki development. I’m still waiting for that other shoe to drop and I have a feeling it’s going to do just that soon.