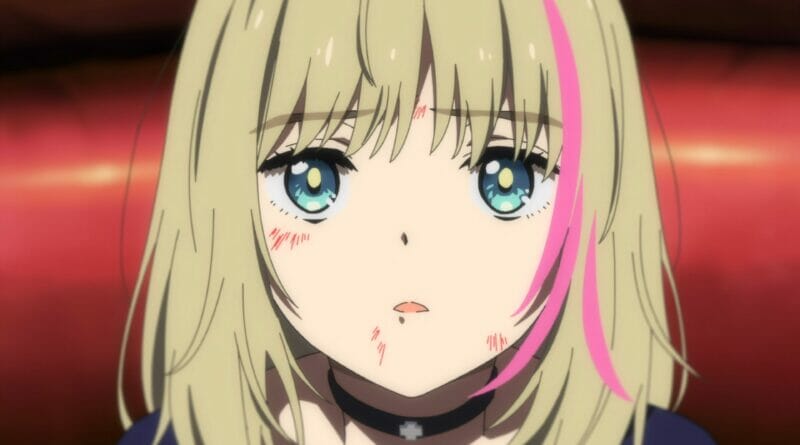 Wonder Egg Priority is slowly giving Rika depth, making her into a much more sympathetic and likable character. Rika’s my favorite character now, I’m not kidding. I’m so excited to see her character growth, more so than Ai, who can feel a little boring at times.

In this episode it’s Rika’s birthday, we see her mom for the first time, and we begin to see why Rika is the way she is. Her mom is a promiscuous woman who runs a bar and is a bit negligent. Rika is frustrated because her mom told her that she would let her meet her father when she got into middle school but she never followed through on that promise. Rika desperately wants to meet her father as a way to escape her current reality. Seeing how troubled her home life is, it’s easy to see that she puts on a front, almost like her mother.

Rika acts blase about not knowing who her father is but it does not come off as genuine and while the girls are chatting she loses her temper at Neiru. Rika is obviously having a hard time and it’s not easy for young girls to know what to do in this situation. While Ai understands what it’s like to have a single mother, Rika’s relationship with her mother is uniquely her own, making it hard for Ai to relate.

The girl that Rika had to save this episode was a former cult member who also self-harmed. She manages to convince Rika to give up and kill herself. Rika falls for it because she is hurting and isn’t hearing her friends as they desperately call out to her. But what snaps her out of her stupor is her turtle, Mannen.

This is a really powerful moment as Rika realizes that Mannen is protecting her because Mannen sees her as its mother. It’s safe to assume that Rika connects this to her own relationship with her mother and decides to keep going. Using Mannen as a way to snap her out of it was an effective tool given the fact that oftentimes, people who were about to commit suicide note their pets as the reason they didn’t. Sometimes people can only do so much. And while it shouldn’t be a child’s responsibility to protect a parent sometimes that’s the situation people are dealt with.

Rika is a strong character and while she was purposefully unlikeable at the beginning she is shaping up to be one of the best characters of the series. I hope Wonder Egg Priority continues to dedicate this kind of character development to the rest of the cast.