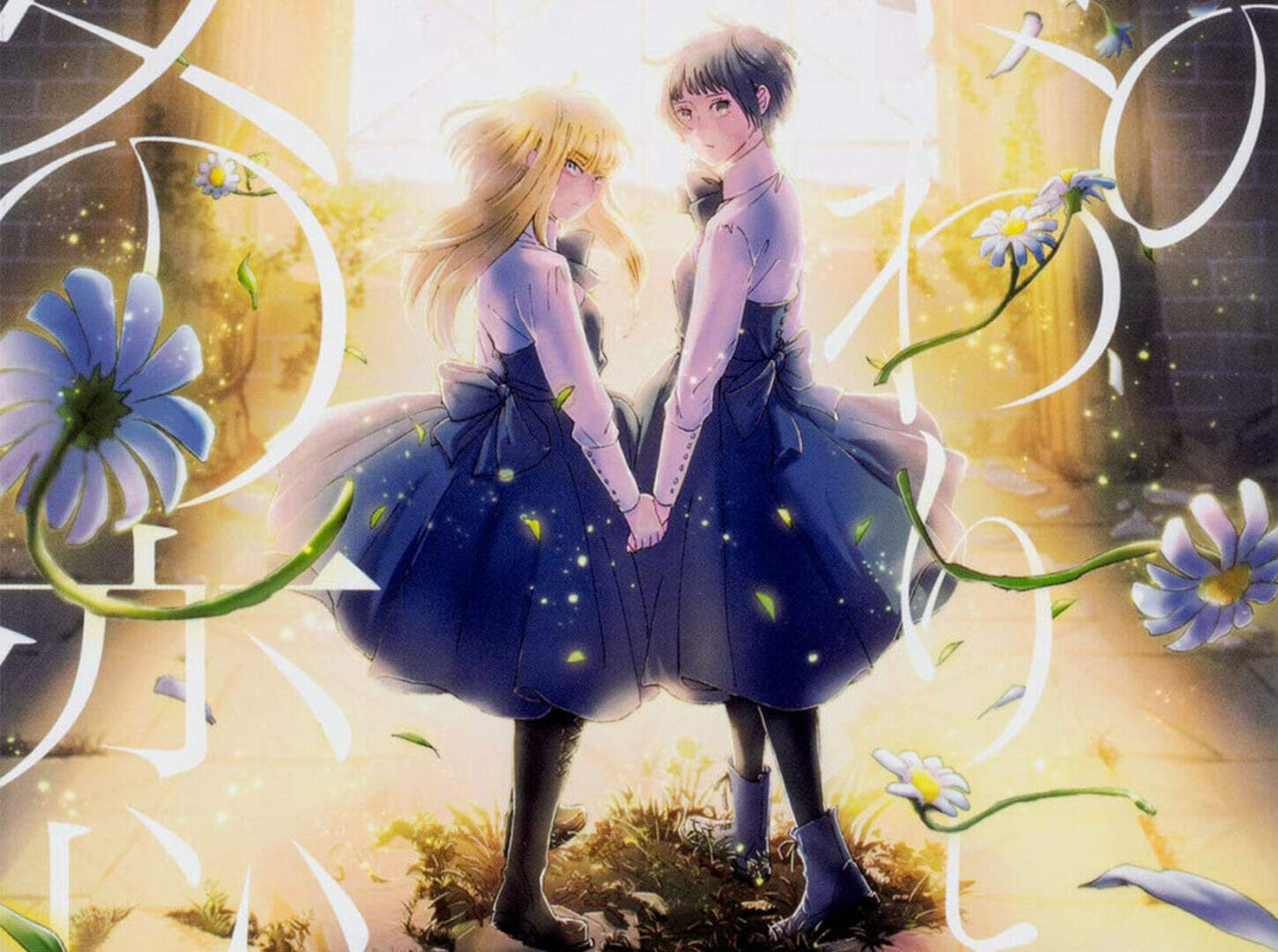 Yen Press, LLC announced a slate of upcoming titles during the Yen Press Industry Panel that was a part of the Anime Expo Lite virtual event. Acquisitions included manga titles, A Witch’s Love at the End of the World, Strawberry Fields Once Again, The Vampire & His Pleasant Companions, Slasher Maidens, Eniale & Dewiela and Mieruko-chan), new light novels for The World’s Finest Assassin, Reincarnated in a Different World as an Aristocrat, The Place Promised in Our Early Days, The Angel Next Door Spoils Me Rotten, Unnamed Memory, King of the Labyrinth and Reign of the Seven Spellblades) and an art book, Overlord: The Complete Anime Artbook.

These titles are all set for release in December 2020:

A deep dive into the planning and making of the hit anime adaption of Overlord reveals delicately crafted settings and the incredible detailed outfits and accessories that breathed life into everyone’s favorite cast of not-so-good guys!

This series of artbooks features hundreds of illustrations—character designs and concept art that went into the production of all three seasons of the Overlord anime series. Also included are interviews and commentary from the production staff.

In a world where magic rules from the shadows, there exists a school for witches. This mysterious academy trains young witches on a path of revenge against those who have used them only as tools. Alice, a magical prodigy, has lived her life by this goal only to have her world turned upside down when Mari, a magic-less human, enters the school and her heart!

Strawberry Fields Once Again Story and Art by Kazura Kinosaki

“I’ll never have a 3D romance!” High schooler Akira loves otome games and refuses to have a 3D romance, so she’s caught off-guard when the new transfer student suddenly declares that she is Akira’s future lover! It’s the start of the bittersweet story of two girls who are more than friends but less than lovers!

Strawberry Fields Once Again is a sweet and beautiful yuri manga that is sure to please fans of realistic school-life romances, such as the best-selling Éclair series, as well as manga that portray otaku culture.

From veteran shoujo manga artist Marimo Ragawa and BL light novelist Narise Konohara comes a strange and sexy tale! When a vampire from Nebraska named Al gets frozen in bat form, he winds up in Japan under the care of a dark and mysterious man covered in a bloody scent!

The Vampire & His Pleasant Companions, a manga adaptation of a popular light novel series, is drawn by Marimo Ragawa, the creator of the shojo series Baby & Me. This sexy and comedic supernatural romance is a must-read for the passionate boys’ love and yaoi audiences.

Around the world, a phenomenon is observed where those whose mental stress reaches a peak transform into monsters called “Kaijin” and succumb to murderous impulses. Such supernatural events were completely unrelated to proud pervert Asuma Sudo, but after he transfers to an all-girls school while chasing the girl of his dreams, he discovers that the school was actually a front for an anti-Kaijin special agency!

Slasher Maidens is a provocative manga series featuring fantasy and harem elements. As the latest series by Akame ga KILL! artist Tetsuya Tashiro, this series will appeal greatly to fans of his previous work as well as fans of gritty school stories such as High School of the Dead and Prison School.

When Eniale the coy angel and Dewiela the serious devil get into frivolous spats, the whole world gets caught up in their antics! Whether it’s wrecking New York in a bid to nab some famous cosmetics, getting into a car chase in Paris over a clothing quarrel, or sinking Tokyo thanks to a zombie outbreak, it’s the advent of an otherworldly duo who are both beautiful and obnoxious!

An earlier work by Witch Hat Atelier creator Kamome Shirahama, Eniale & Dewiela is a quirky manga about an angel, a devil and a ton of trouble the two get into together. Praised for her amazing artistic ability, Eniale & Dewiela features amazing illustrations from Shirahama that showcase a sexier side to her artwork.

When a girl sees horrific creatures that can’t be seen by ordinary people, she doesn’t run away or confront the creatures…she simply tries to live a normal life!

Originally a webcomic published in the Pixiv online art community, Mieruko-chan is a unique manga series that does an excellent job mixing horror, comedy and cuteness together. With horror standing out as one of the most popular genres of manga today, Mieruko-chan is sure to be a hit with the many of today’s fans.

The World’s Finest Assassin, Reincarnated in a Different World as an Aristocrat Story by Rui Tsukiyo Illustrations by Reia

When a great assassin is reborn in another world, he finds himself the heir to a long line of killers from the shadows. With both his modern-day knowledge and experience and the special magic and techniques of this new world, he could very well become the most unstoppable assassin in history…!

This quirky isekai light novel series follows a reincarnated assassin who is tasked with killing the hero of another world. As an unconventional story told from the point of view of an anti-hero, this series appeals to fans of recent light novel hits such as The Genius Prince’s Guide to Raising a Nation Out of Debt.

The Place Promised in Our Early Days Story by Makoto Shinkai

In the Soviet-occupied Japan of an alternate history, two childhood friends who have grown apart find each other again and begin a search for a missing third friend-and possibly save the world in the process. Acclaimed director Makoto Shinkai pens his own novelization of his first feature-length animated film!

The Place Promised in Our Early Days is a novel adaptation of an early film by Makoto Shinkai, the celebrated creator of animated films such as your name. and Weathering With You. This hardcover novel is a must-have for fans who have collected the best-selling novel adaptations of Makoto Shinkai’s works previously published by Yen Press.

Amane lives alone in an apartment, and the most beautiful girl in school, Mahiru, lives just next door. They’ve almost never spoken—until the day he sees her in distress on a rainy day and lends her his umbrella. To return the favor, she offers him help around the house, and a relationship slowly begins to blossom as the distance between them closes…

The Angel Next Door Spoils Me Rotten is a school-life romance story, a category that has had a resurgence in popularity in the world of light novels. A series that tells the tale of a boy who finds himself in a budding relationship with the most popular girl in school, this series appeals greatly to fans of Bottom-Tier Character Tomozaki.

Love can bloom in the strangest places…and people! A cursed king and the world’s strongest witch are about to cross paths, forever changing their future and the fate of the world!

Unnamed Memory is a fantasy adventure light novel, one filled with drama, mystery and romance. This light novel series is quickly gaining a passionate fanbase worldwide due to its captivating storyline as well as its beautiful illustrations.

King of the Labyrinth Story by Shien Bis

On the tenth floor of the labyrinth awaits the minotaur. Many brave adventurers have challenged this great beast, all have thoroughly failed. “More!” Demands the powerful monster. “Send me more powerful opponents!” This creature blindly pursues strength at any cost. Perhaps it will even grow strong enough to surpass the rules of the labyrinth itself! Can any adventurer hope to stand against such a mighty creature?

An unconventional story that is told from the point of view of a powerful dungeon monster, King of the Labyrinth is an intriguing light novel series that puts a twist on the popular genre of dungeon-crawling fantasies such as Is It Wrong to Try to Pick Up Girls in a Dungeon?

Springtime at Kimberly Magic Academy, when new students begin their first year. One boy, clad in black robes with a white cane and sword strapped to his hip, approaches the prestigious school. This young man—Oliver—must form a bond with a katana wielding girl named Nanao if he’s to survive the dangers he’s to face at this school that is anything but what it seems!

For more news on Anime Expo and other upcoming Yen Press projects, make sure to keep it locked right here at The Nerdy Basement. Also, while you’re here, consider supporting us on Patreon. It’s a simple way of supporting us so we can keep on providing you with your Nerdy News!