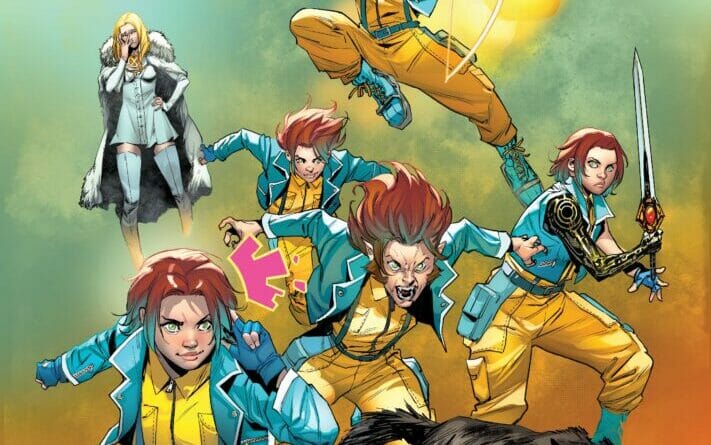 Last month, Escapade made her grand debut in MARVEL’S VOICES: PRIDE #1 and captivated Marvel fans with her fascinating power set, uplifting backstory, and delightful supporting cast. And this bright new mutant hero’s journey is only just beginning! As promised, Escapade’s saga will continue this October in NEW MUTANTS #31!

Hugo and Nebula Award-winning author Charlie Jane Anders returns to Escapade’s story in a three-issue guest arc of NEW MUTANTS alongside Alberto Alburquerque. The arc will also feature comic strips drawn by Escapade’s co-creators, cartoonists Ro Stein & Ted Brandt! Further incorporating Escapade into the world of the X-Men, Escapade will join the New Mutants to learn to control her one-of-a-kind “swap” abilities so she can prevent Destiny’s deadly prophecy from coming true…

Personally recruited by Emma Frost herself, Shela Sexton reluctantly joins her fellow mutants on Krakoa in the hope that the X-Men can prevent the death of her best friend. But is Emma telling her the whole truth? Can Shela adjust to life on the island? Will the New Mutants accept her? Or is this crash course in Krakoan headed for a deadly pileup?

“I have been such a fan of everything Vita Ayala, Rod Reis et al. have been doing in NEW MUTANTS, so it was a total thrill to bring Escapade, Morgan, and Hibbert into their world,” Anders said. “The characters we introduced in MARVEL’S VOICES: PRIDE #1 took on a whole new life when they were hanging around with the New Mutants and the Lost Club, and I’ve been having unconscionable amounts of fun. And as a huge admirer of Alberto Alburquerque’s work on No One’s Rose and other comics, I was psyched to hear that he’d be bringing this tale to life. It’s going to be a wild ride!”

Join Escapade and your favorite lovable mutant rapscallions in the start to a wild ride when NEW MUTANTS #31 hits stands in October.