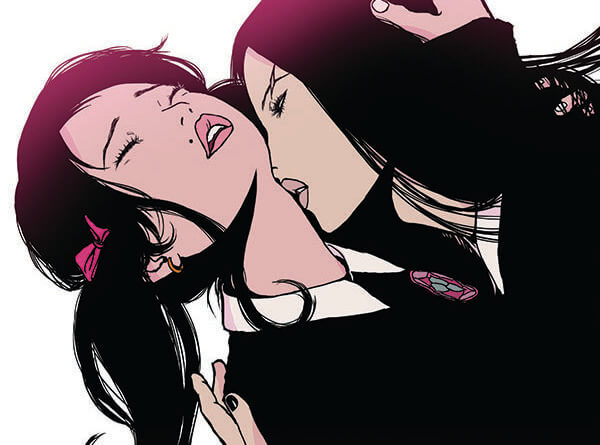 
ABLAZE has announced that they will be launching two new comic book titles from comic creator Maria Llovet. ‘Porcelain’ is a horror series set to launch on August 4th and ‘EROS/PSYCHE’, which is set to launch on September 29th. Both titles will be releasing simultaneously in print and digital on their respective release dates. Both titles will get fans excited for the upcoming Halloween season! Check out the covers and interior pages for both ‘Porcelain’ and ‘EROS/PSYCHE’ below.

Beryl’s life in the desert is relatively simple, living with her aunt and her cat, …until the day she finds and enters the Dollhouse. Stuck inside an ever-changing mystery house that hunts children and turns them into dolls, Beryl goes on a psychedelic journey where she must face the notion of her own limitations and move past them…before she becomes the building’s newest prey. PORCELAIN is a psychological thriller, depicted in a way that only acclaimed creator Maria Llovet (Faithless, Heartbeat, Loud, Eros/Psyche) can tell it. Catch the series debut with 5 special variant covers by acclaimed artists such as Sabine Rich, Caspar Wijngaard, Yishan Li, and Tyler Boss, as well as Maria herself.

The Rose female boarding school is a paradise for young girls…but only if you follow the rules. Because, if you disobey them, you can end up expelled, or even worse, dead. Sara and Silje are two students learning the rules of the school, which includes classes by day…and the casting of curses and spells by night. Love develops between the two, which is tender but threatens to break under the weight of the dark secret society within The Rose.  Acclaimed creator Maria Llovet brings readers a surreal, bewitching tale of love, magic, and tragedy in EROS/PSYCHE. The hardcover collection contains the complete series plus a cover gallery and an extras section that fans of Llovet’s work are sure to enjoy.

Creator Maria Llovet was born in Barcelona, Spain, and has drawn wide acclaim for her work. Her style has its stylistic roots in Japanese manga but she also drinks copiously from influences ranging from European art to the fashion industry. Her work is also characterized by a cinematographic influence that helps to drive her visual narratives. Sex and death are the big two central themes in her work.