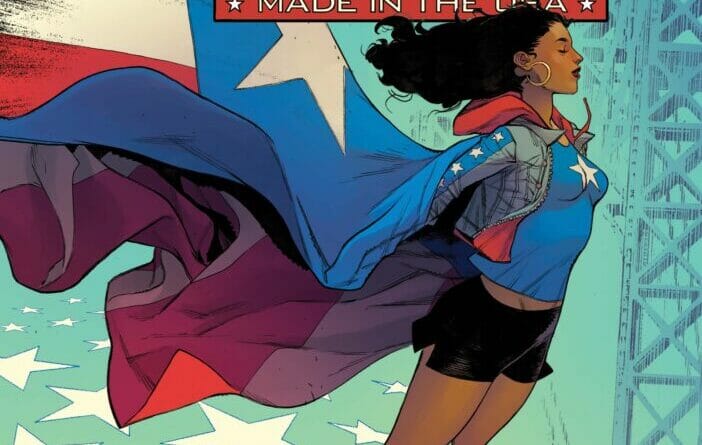 America Chavez: Made in the USA #2 Review


America Chavez’s past is on full display. Yet, it isn’t all sunshine and rainbows. Also, a mysterious being has a brief, but victorious confrontation with America.

In the last issue, we got a look at America Chavez. We saw her being taken in by the Santana family. They raise her and she would eventually leave her home to be a hero. She is a member of the West Coast Avengers, alongside Kate Bishop and Alloy. However, she is brought back home, after a near left her family dead. Now, our hero has to find out the person responsible. We start with a flashback, the young girl is beating up a kid named Camilo. The reasoning behind this is because the young boy made fun of America’s family tree. She has incorporated her biological mothers in it. Her brother Alberto saves the boy from the beatdown.

We then jump back into the present. Spider-Man and America are talking about the Utopian Parallel. This was the original home of Miss America. The two then see criminals attempting to loot her family’s business. The heroes stop them and Spider-Man brings them to the police. As America looks at the note from the hood figure, we are brought back to the past. The Santanas bring her to a therapist. America goes on and on about her heroic mothers. Yet, her adoptive parents and the therapist think this is a part of her trauma. As the three continue talking, America levitates off the floor. The adults witness this and then we jump back to the present.

America’s aunt, uncle, sister-in-law, and nephew greet her. Her nephew, JJ even grabs a hold of her hair questioning who this is. The sweet moment ends with her mom asking about the note. She added that she knew this would happen. Then, her dad asks her to meet him in the Bodega. Once again, we jump back several years. America is saving the young man that bullied her from a couple of criminals. After knocking them out, she is stopped by a cop. Now in the present again, her dad expresses that he and the family missed them. They then talk about the figure hunting down America. She then finds a clue to the enemy’s location.

Once more, we cut back to the past. The officer returns her home to her disappointed parents. She hates how parents are not as supportive as she thought they would have been. Even going as far as referencing her mothers. Her parents fear that one day her actions will impact them. Now walking through Jones Beach, America is on the phone with Hawkeye. The pair have a brief talk about the hooded figure and Kate’s taco.

After the call’s conclusion, America finds herself at the Indigo Lanes Arcade. She steps in and this brings us back three years in the past. The family is having a baby shower for Alberto and Julia. As America walks in Alberto tells her that she smells. However, their parents are not having it.

They are once again not happy with the fact that she disappeared again. They also call her selfish for being selfless. Then, the fight just escalates with only Ceci fighting with America. Alberto even involves himself. With tears streaming down her eyes, America tells them that she’ll have more of a choice than her nephew.

In the present, America finds the criminal. The pair run, fly and end up in the woods. While searching for the enemy, they shock America. She is unconscious and is approached by the hooded figure. We then see this figure with the same star markings as America.

Kalinda Vazquez once more does a great job! Her writing has been impressive. I loved the fights that America had with her parents. She just wants to be like her mothers, but it feels as if she is being held back by her parents. They probably want her to help others, but they know that it will also impact them.

We got evidence of that in the last issue. The theme here is family as is present on every page. America acknowledges her first family and the focus of the story is centered around the family that took her in. This theme continues its relevance as I believe that this enemy of America’s is probably her sister. We should find out pretty soon.

As for the art, Carlos Gómez and Jesus Aburtov continue their beautiful work. Details are also important and it is present. From America’s family tree drawing to America’s action panels, I have nothing bad to say about the artwork. Also, I loved the final past/present transition the story had. America walking into the Arcade about to confront the villain, then walking the baby shower. Both events resulted in our hero fighting with someone close to them in some aspect. I absolutely love what these three and are doing here!