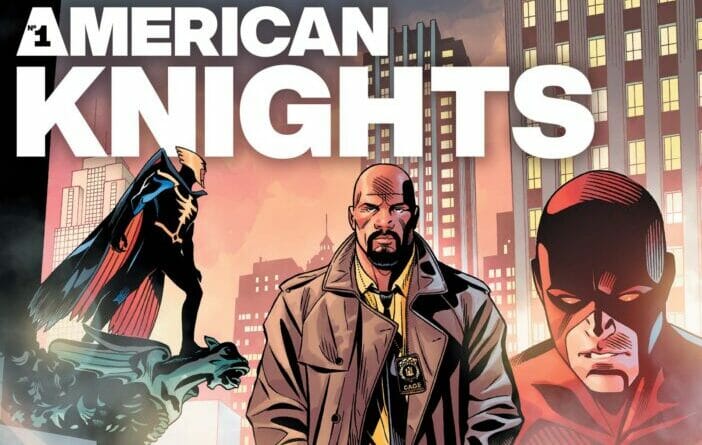 
Luke Cage is a part of a world with no Avengers. Instead, he is not bulletproof and is a police commission in Washington D.C.

In American Knights, The Squadron Supreme are Earth’s Mightiest Heroes in this storyline. Meaning, certain characters have taken up different lives. Jessica Jones and Misty Knight work under Luke Cage. Matt Murdock is a cleric, worshiping Mephisto, but there is no Daredevil. Finally, Nighthawk is getting a prominent role in Marvel’s recent story. Let us review Cage’s work as a commissioner and the many cameos.

We start with Luke narrating about how Washington D.C. is good, but not perfect. While he is talking to us, a young man is attempting to mug a couple. Yet, he is stopped by a vigilante in a red suit, wielding two bats. We then cut to more narration from the main protagonist. Meanwhile, he is integrating the young man, Richie into a cell.

Almost half an hour later, our hero meets up with Nighthawk. The pair are working together to take down Turk Barrett. In this timeline, the crook is a high-profile crime boss. Richie was working under him and spilled the beans on his operation. Nighthawk receives the information and tells Luke to be careful.

Hours later, the news touches on the subject of the bat-wielding vigilante. The press is calling them “The Saint”. While this is going on, Turk and his team talk about how The Saint is a problem. Grotto, another person working on the crime boss informs him that Richie was arrested. Turk is not happy and has Lt. Sanders take care of Luke. He even offers to take out the commissioner for free.

A couple of hours later, Jessica Jones and Misty Knight are at another crime scene relating to The Saint. This time they see a beaten, but alive Lonnie Lincoln aka Tombstone. Luke then joins the ladies. They believe that he is working with Nighthawk, but Luke denies this. They realize that whoever took out Lincoln is a bigger problem. By the way, Tombstone was an enforcer for Turk.

Sometime after, the trio meets the Cleric, Matthew Murdock. They ask him questions about fellow followers of Mephisto, specifically Tombstone. Matt admits that the enforcer would be a regular at the church. He even added that the likes of teachers and police officers were members. He continues by worshiping the demon. After the meeting, Sanders and Cage are being interviewed by Betty Brant.

She was talking about The Saint earlier. The interview is just wrapping up, with the officers informing the public to just be good. After the conclusion, Luke expresses that he hates Sanders as he gives off ACAB energy. He even has the lieutenant remove the Mephisto tag on his uniform.

More time goes by and the ladies are meeting up with Matt again at the church’s hospital. They are going to integrate Tombstone. They find the enforcer dead and fingers point to Matt being responsible. The reason for this is because he was the last one to see him alive.

Almost six hours later, Luke is chilling at home. However, the police are getting ready to raid the Mephisto church and the press is covering the ongoing event. Luke comes to aid his partners. Minutes after, Turk meets up with Gunter. Guns are about to be exchanged, but Nighthawk interrupts the deal.

Meanwhile, Luke ensures that Sanders backs off. Luke goes into the to find Matt. Once more, we turn to Nighthawk fight off the criminals. Back to the church, Luke narrates again. He expresses that his parent’s Christian belief was just a cult. He is then attacked by The Saint. During the fight, the vigilante stops, realizing what he’s done. Matt was the one behind this. Yet, he went by “Serpent” and it was Matt’s body basically being possessed.

As Matt looks at his “god”, Luke comforts him. Nighthawk finally has Turk in his sights. However, before he can do anything to the crime boss, Turk shows the vigilante the situation at the church. Police are looking to shot on sight, with Sanders giving the order. Misty and Jessica attempt to stop him, but it is too late. Matt is shot, but Nighthawk comes shortly after. Matt dies from his wounds and Luke is not happy. Sanders receives a nice right hook and a pink slip from the commissioner. The ladies look on in joy towards Luke’s actions.

Almost an hour later, the heroes meet up on the rooftop again. Luke apologizes for Turk getting away. However, Nighthawk is fine with him getting away. He even gifts the commissioner with a bulletproof vest. This story was a solid read! Paul Grist nailed it! I love how Luke was working for the very thing that has kept him down in the past. I also love how he did something about a cop that is clearly abusing this power.

This was a reflection of the real world. With bad cops, being both guys like Sanders and the ones who let cops do what they want. Yet, Luke is different showed that the law should be fair. Luke is the cop that every cop should be. Matt as The Saint was obvious, but a very cool and interesting concept. A follower of God turned into a Satan worshipper. I loved how the story changed the arcs of the main characters. Even the ones that we don’t know about, like Nighthawk.

Also, Luke and Nighthawk were clearly parodying Batman and Jim Gordon. That was also seen, but a cool concept. Also, the cameos were fun too. From Betty Brant to Turk Barrett. It was fun reading this issue, this was one of those reasons. Also, for those who do not know Grotto he was a minor character in Daredevil (2015-2018) season 2. As for Tombstone, he is an underrate Spider-Man villain.

He has made appearances in the PS4 Spider-Man video game and Spider-Man: Into the Spider-Verse (2018). As for art, it was clean! Chris Allen, Marc Deering, and Guru-eFX did not miss when it came to details. These illustrations were spot on and loved looking at everything. The shots of The Saint, his church, and Matt, in general, stood out to me the most. As I said, this take on the character was a reason for the good read!