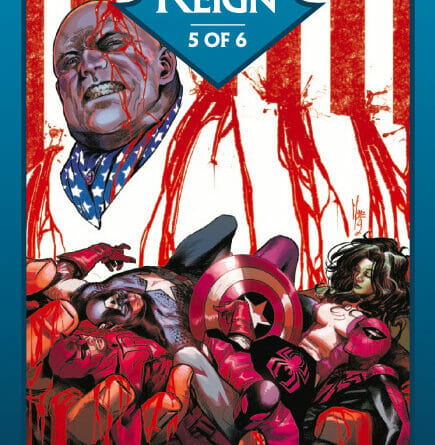 
The secret of Daredevil is revealed. Along with the whereabouts of the Purple Children. With these revelations, Mayor Fisk is looking for his greatest victory and blood!

To quickly recap, Wilson Fisk is New York’s Mayor. He is using his influence to punish heroes for saving civilians. The Avengers and Champions work together to put a stop to Fisk’s madness. Even though Fisk has the upper hand, he has to deal with two issues. First, his son, who claimed the role of Kingpin, despises his father. Secondly, Doc Ock has taken power from the former Kingpin. This may be his toughest challenge, but it may seem the tide will turn in his favor. Let’s continue this awesome story, Devil’s Reign!

We start with Fisk enraged that Matt used Purple Man’s powers to erase his memory. He repeats his name over and over. While this is going on, an assistant lets him know that the Purple Children have been located. Fisk orders to take them by any means necessary. We then see the kids under the care of a woman.

A couple of them want to manipulate the drones outside. Yet, they hear a knock at the door. It is the U.S. Agent to take them. One of the kids attempts to use their powers, but it doesn’t work. In the last issue, Fisk equipped the Thunderbolts with tech to combat the kids’ abilities. After this, the kids are incapacitated by Electro.

Thinking they have completed the mission, Jessica Jones and the Champions show up to save Kilgrave’s kids. The heroes fight off the villains as Ironheart retrieves one of the kids. Then, Abomination is revealed as another Thunderbolt. He stopped Nova and Jessica Jones. The PI then has a power dampener attached to her neck. Before she is beaten by Abomination, Miles Morales saves her.

The heroes successfully get away with one of the kids. Meanwhile, Mike Murdock visits Butch, Fisk’s son. The pair argue about Butch’s role as Kingpin. The argument then turns into Mike talking about his existence. A stone is responsible for why he exists. He wants to use it to stop Fisk. However, Butch disagrees and storms off.

Fisk is then examining Doc’s work on the kids. He is transferring their abilities to their father. While this happens, Fisk reveals that he no longer wants to be Mayor. This confuses Otto and Fisk fights back against his grip. He does so by having Otto’s variant of the Hulk attack him. He then orders the now returning Purple Man to kill everyone.

In an underground base for the heroes, Luke Cage returns for a campaign event. Jessica is recovering from the assault by Abomination. Spider-Man aka Ben Reilly is working on a device to fight against Kilgrave’s powers. The kid that they managed to save suggests killing his father. Daredevil disagrees and tells the kids they are better than that.

The man without fear then gets a call from D.A. McDuffie. She informs him about an uprising and is going to talk to Matt about this. Even though she just did, without realizing it. We then are brought to Otto’s inferiors and the Thunderbolts facing off against our heroes. Most of the villains are under Kilgrave’s control. It gets worse as now the civilians are under control too.

Later, Mike entered his place as it was ransacked. He believes Butch was looking for the stone, even calling him. However, he is greeted by Butch’s father. Fisk believes that Mike is Matt and beats the living hell out of him. Thinking he is Daredevil, Fisk thinks he is exposing Matt for faking his disability. Also for getting into his head. The beatdown ends as McDuffie shows up at Mike’s place.

Chip Zdarsky continues a good job with the writing. This issue was alright, especially compared to the others. I was really enjoying the last bits of the story. Seeing Fisk beat on Mike, reminded me of the good old days of the Netflix show. Same for the beginning of the story. It was solid work here and gets me excited to read the final issue.

As for art, Marco Checchetto and Marcio Menyz also shine again! Details are present as we get some fantastic panels. Seeing everyone going head-to-head was awesome! Along with the return of Kilgrave. The art did not miss. The visuals are always a treat! The same goes for the cover as Checchetto collaborated with Matthew Wilson. The great shot of Kingpin holding the bodies of the Avengers is badass! Also, a great foreshadowing of things to come for Daredevil in this issue. I told you he was out for blood.