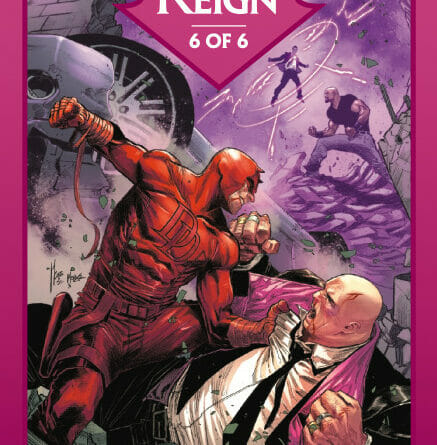 
The final issue of Devil’s Reign is finally here! This was a great conclusion to the best storyline in 2022, so far!

For those who are new, here is a brief recap of the story. Wilson Fisk became the Mayor of New York. He was given this role by the Stromwyn siblings. Their aid in Fisk’s campaign also granted him the power to do what he felt was necessary. He would outlaw superheroes and in their place his Thunderbolts team. Meanwhile, he kept Purple Man hostage. This was so that he could use his abilities to continue his influence in New York. He also recruited the assistance of Doc Ock. Daredevil and other heroes banded together to stop Fisk and his deadly alliance.

One way they did this was by having Luke Cage run against the former Kingpin. Fisk also rediscovered Daredevil’s true identity. This led him to the attack on Matt’s twin brother, Mike. With Fisk having the high ground, let’s see if he was successful in his ultimate goal. We start where we nearly concluded in the last issue. The Avengers are taking on Doc Ock, his Superior Four stable, and Thunderbolts. During the fight, Daredevil is called by D.A. Kristen McDuffie. She tells him that Mike was murdered by his arch-rival. An enraged Matt vacates the fight to find Fisk.

While the fight continues, Fisk is greeted by his wife, Typhoid Mary. Seeing the blood on him, he tells his wife that he murdered Daredevil or so he believes. The pair pack and make a run for it. However, they are ambushed by Elektra, who is also Daredevil. Before she can continue her assault, Fisk is once more confronted by Matt. Back at the main fight, Iron Man stops Doc Ock. The Avengers then gain the help of the Fantastic Four and Moon Knight. The hero’s struggle continues as the civilians are still under mind control. Also, one of the purple kids is confronted by U.S. Agent and Whiplash.

We then return to the major tag team. The Daredevils versus the Fisks. We have a sick back and forth from both sides. As Fisk is throwing jab after jab, he yells that Daredevil ruined everything. Back at the big fight, Purple Man reappears. He tells his son that he killed his siblings for their powers and that he is next. Luke Cage then bolts to save the remaining purple kid.

Returning to the two-on-two action, Elektra is successful in defeating Mary. Fisk is monologuing again. We then see Daredevil take Fisk’s cane to temporarily stun him. To make Fisk “pay for his sins”, Daredevil shatters the cane with his enemy’s head. The onslaught of punches continues as Luke Cage is instructed to kill Purple Man’s son.

Grabbing one of Elektra’s Sais, Daredevil goes for the kill. It also looks as if Luke is about to do the same. Yet, Elektra reminds Daredevil of the potential consequences if he kills Fisk. Adding that he is not an assassin. Also, Luke comforts the kid by putting his hands on his shoulders. The kid stops his father and Elektra saves her greatest ally.

The heroes then apprehend most of their enemies. Jessica finds Luke with the purple kid as he is greeted by his siblings. The power couple also finds out about Fisk’s arrest. Ultimately, Luke Cage is now the city’s mayor. Now in the custody of the Thunderbolts, one of the men brag about Fisk’s arrest. Turns out, this was Butch, Fisk’s son and the new Kingpin.

He brings them to his office, where they are greeted by the Stromwyns. Butch planned with the two on taking back New York. They decided to appoint or help Fisk become the United States president. Fisk sees this opportunity and signs on to it. However, he breaks one of the siblings’ hands. He also stops some soldiers protecting the siblings as the other one is shot. Butch helps him to stop the guards.

This confuses Butch as Fisk explains that he is tired of people telling him what to do. He continues by telling his son that he is a Fisk. Wilson also allows Butch to keep the title of Kingpin as he tells Butch he killed Matt. The younger Fisk realizes that Mike’s demise was kind of his fault. A week later, Matt and Elektra talk about Matt Murdock being “dead”.

Along with that, plans to travel the world to stop the Hand once and for all. Sometime later, Fisk is about to sail the world with his wife. Wesley is sad about his friend leaving. Fisk assures him that everything is fine and that he was a good friend. Mary then tries to convince her husband to take back New York. Despite this, Fisk just wants to rest. The issue then ends with the pair going off into the sunset in the sea.

Chip Zdarsky had one job and delivered with no sweat! The writing from Chip was great! His contribution to this storyline made for a good read in 2022. Maybe even the best. I loved how Daredevil was about to kill Fisk again. I thought he actually was going to go through with it. In general, the whole story’s theme was about control and being unable to maintain it. Matt lost it when he found out about his brother’s killing. He also had these thoughts before.

Fisk lost it when he was lied to. He lost it again when the Stromwyns tried manipulating him again. Also, Purple Man was the main villain behind the main villain, so yeah. Not to mention, the heroes, villains, and civilians that could not think for themselves. Control is so easy to lose and we do not think when we lose it. Along with the nice writing, we had some nice illustrations. Marco Checchetto and Marcio Menyz killed it too! The fight scenes were some nice highlights. The multiple one-shots of the Daredevils or one of them popped! My personal favorites would have to be Luke Cage and Matt stopping themselves from killing.

This showed that Luke Cage was always deserving of becoming the city’s mayor. Also, this was sort of him also being a parent. He truly is a hero, even without hiring him. As for Matt, Elektra is kind of the angel on Matt’s shoulder. She tells him he can go ahead with the killing, but he will truly become the devil. She does not want him to go through the same path she did. The irony in that image made it into such an iconic moment in comics!

Finally, seeing Kingpin riding off into the sunset actually put a smile on my face. He is still evil for killing Mike. Yet, he too was a victim of people controlling him too. Seeing him rest was beautiful and almost wholesome. Even for someone like him. As for the cover, the artist continues to impress! Once more, the foreshadowing shows the relevance of the cover and the story behind it. Daredevil was going to win. Not just by beating down Fisk, but also by not turning into him.