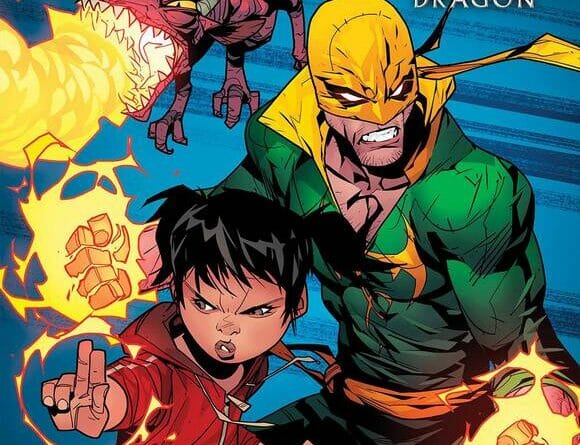 
Danny Rand joins forces with Luke Cage and others to battle against Hierophant. Yet, the Iron Fist has a confrontation with the Dora Milaje’s leader, Okoye.

Iron Fist gathers up Power Man, Pei, Gork, Fooh, Fat Cobra, Dog Brother, and the Bride of the Nine Spiders. The team is tasked with protecting the rest of the dragon. Accomplishing this requires them to manifesting the heavenly cities on Earth. The team is witness to Okoye standing over a dead dragon; holding its heart. What they don’t know is that the dragon ordered Okoye to take the heart. This would help her inherit its powers and abilities. Also, this is after the general attempted to avenge her fallen comrade; slain by another being.

Hierophant is in Bao Fu Citadel taking the Chi from the Heavenly Dragons. As he continues monologuing, he is looking upon the destruction of K’Unzi. Sunspot tries to take down the antagonist but is stopped by undead ninjas. Making his way through Peng Lai, Heirophant is almost attacked. His attacker is then killed, it was one of Brenda Swanson’s minions. This character is the daughter of Harold Meachum. She is following Hierophant and goes by Yama Dragonsbane.

We then shift to the heroes listening to Okoye. She tells them that the dragon, the Prince of Orphans needs her to restore the cosmic balance. Danny does not believe her as she is handed the Chi. As he is about to engage, Okoye breaks the ground beneath them. The pair and the dragon’s corpse fall to the ground. Luke Cage and the other warriors fight off undead ninjas. Iron Fist and Okoye fight. The two continue going at it until they are interrupted by Quan Yin. The spirit explains that they must stop Hierophant. She also adds that Okoye was not stealing Chi. As Quan keeps talking, the bad guys appear. Yama ends up stabbing the spirit, killing her.

The warriors then intervene confronting the villains. Yama attempts to slice Luke, but the sword breaks. We see the other heroes fighting off Heirophant. Fooh uses a cannon to shoot him and it sends shockwaves to New York. Iron Fist and the warrior arrive outside of the Bao Fu Citadel. The story itself wasn’t all that exciting. Larry Hama’s work was just average and didn’t bring anything special to the table.

The only exception I can make is that Okoye was given Chi. It’s not gonna be permanent, but it is cool to see. As for the art, Dave Wachter and Neeraj Menon did a nice job. Detail is always a must and it shows in their work. Once again, Okoye is at the center of attention. As it was her inheriting Chi that was so beautiful. Overall, this was kind of an underwhelming issue.