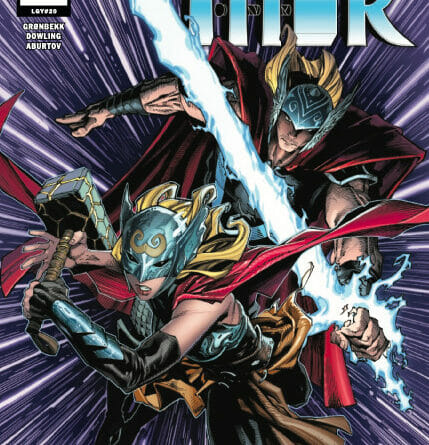 
Asgard’s King, Thor Odinson is nowhere to be found. Where is he? What does this mean for his people? Who will answer the cry for help? How convenient seeing past foes planning an atrocity right now? A mysterious being has freed and united prisoners of the world tree’s roots. The underground penitentiary housed Algrim the Strong, Ulik, Hela, and Tyr “The Traitor” Odinson.

All except for Hela took an oath under the being. They were granted a chance at stopping the forces of Asgard. Jane Foster, who goes by Valkyrie, Sif, Beta Ray Bill, Rūna, Mr. Horse, and the new All-Father, the Mighty Thor. Aside from Thor’s disappearance, Jane struggles with her Godhood and her humanity.

This is despite the fact Thor views Jane as his greatest ally. So, let’s see how Jane will attempt balance as she looks for her former love. After the prisoners’ escape, we are brought to a week later. Jane, Roz Soloman, Captain America, and Ironman are stopping a person with a bomb at a park. While scanning the park for the target, Jane talks about the Agent of Wakanda. The good from someone with so much pain. Jane then finds the target, as the heroes evacuate the park and confront the terrorist.

The man with the briefcase is confused as he is being apprehended. All of a sudden, he activates, as he is revealed to be the bomb. Roz stops him from killing everyone in the area. Shortly after, Jane is greeted by a being that admires the Valkyries. Jane extends her hand to the being so they can join her on one more journey. In Ohio, Rūna is on a date. She is with a woman named Michelle as the pair play ten questions. As the employees support the date, the new broadcast mentions the event that just took place.

As Jane enters her home, she is greeted by Mr. Horse. They talk about her day and how the horse is special to its people. Meanwhile, Sif calls for the Master of War. As that happens, Mjölnir crashes into Jane’s home. The weapon is covered in blood, and Jane realizes it is a message from Sif. This looks to be a prelude to what is to come. On Asgard, Sif is receiving questions from Jane about the situation.

Sif is unaware of what is happening. All she knows is that Thor is gone. As this takes place, Beta Ray Bill, Master of War appears. Sif asks Jane to see if Thor is dead. Jane finds that he is still alive and orders Mr. Horse to find Rūna.

Sif and Bill have prepared their troops for the Dark Elves’ arrival. Bill is shocked to hear Algrim has been freed. The Asgardians fire their cannon as war beings. In retaliation, Algrim throws down black holes. The Dark Elf has the upper hand. Back on Earth, Rūna’s date is interrupted by Mr. Horse. Jane Foster is hesitant about receiving the powers of Thor. She settles for the Valkyrie form with the hammer.

She then is chastised for refusing the responsibilities of these powers. This voice belongs to Odin Borson. This leaves Jane in a state of confusion. After he died in Thor’s previous run, he passed on his essence to his favorite son, Thor. This explains why Thor is now the All-Father. She gazes upon the speaking hammer, still in disbelief.

Odin tells her to get over it and embrace her full potential again. She promises to use the full power, but only as a last resort. Elsewhere, the hooded being is speaking with Enchantress. As they speak about their actions and the future, Asgard continues to fall. Enchantress promised to be given her prize. That being an imprisoned Thor. Torunn Grønbekk does a pretty good job with the writing. Rūna adapting to somewhat of a normal life is interesting.

Cool to see that being a Valkyrie will always be ingrained within her, like every superhero ever. Yet, it was Jane’s involvement that made this story enjoyable. Her conflict with her self-power struggle adds more to her already unique character. She has earned the respect of a lot of people, specifically Asgard. She is in a sense the true first line of defense.

Adding to that, talking with Odin reminded me of Moon Knight and Eddie Brock and the Gods in their heads. Finally, her powers tell another story. She can see everything. However, she cannot see herself fully embracing the role of Thor again. This is despite the fact people love her heroism, with Thor leading that support. As for the art, Michael Dowling and Jesus Aburtov did a great job! The visuals of each character are on point, but the fight scenes stand out even more. Yet, it is the remaining visuals of Jane that define the story and its future.

The all-seeing goddess teases her role and shows off her powers. Also, seeing the cracked hammer and one-shot of Jane Foster’s Thor makes me even more excited for Thor: Love and Thunder. Then, the issue’s cover continues that idea. Ryan Stegman, JP Mayer, and Marte Gracia do a fantastic job too! Both Thor’s carrying their respective weapons show that they have or will accept their roles. No matter what, the characters and readers will always see the pair as Thor.