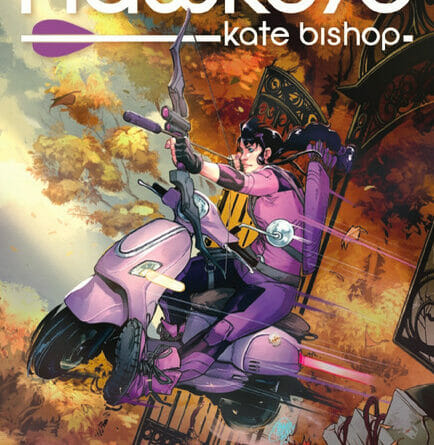 
Kate Bishop looks to stop Madame Tiboldt with the help of a couple of friends. Yet, the heroine also has to deal with a trippy illusion.

After leaving LA for New York, Kate Bishop looks to find herself again. However, an event at her sister’s party in the Hamptons causes the younger Hawkeye to go into PI mode. Both her and her older sister, Susan are trying to figure out who is behind this mess. This individual is a newcomer, Madame Tiboldt. The irony in the chaos actually brings the Bishop sisters closer. Once criticizing each other, now worrying over each other. As their relationship continues, so does the story. So, let’s see how the duo will deal with the illusionist villain, Tiboldt.

Kate and Susan escape from setting a resort ablaze. Susan is worried about potential casualties even making sure her driver called the fire department. Yet, Kate made sure all the guests made it out safely. Their driver takes them to the mansion. Over there they are greeted by Kate’s best friends, America Chavez and Stinger.

The pair will aid the Bishops in stopping the enemy. Kate Bishop disables a drone, Lucky serves as a distraction, America pairs up with Susan, and Kate is with Stinger. While in the mansion, Kate is once more confronted by the arrowhead minion of Tiboldt. She is now dedicating her skill to take out Hawkeye after their last fight. It looks as if Kate is losing, but she pulls an iconic trick. She shoots an arrow with Stinger on it. Stinger grabs the arrowhead, while enlarged, and flicks her, knocking her out. The pair then walk into a mirror dimension set by Tiboldt.

Kate is greeted by an old version of herself and the leader of the circus. She is eager to get out of the area while cracking jokes along the way. This illusion ends with Susan and Lucky assisting Kate. Susan is stabbed by an arrow, but Lucky is stopping Tiboldt. America and Stinger then attempt to apprehend the illusionist. Despite their efforts, they were only able to stop Tiboldt’s men and women. Kate also shows concern and gratitude for her sister’s work. Likewise with Susan. We then see Lucky chewing on a piece of the tesseract they were after. He is doing this while surrounded by toys and pizza.

We then see the sisters continuing to show their appreciation for one another. Along with that, we see Kate texting Clint. The latter questions Lucky’s actions. After, we then see the four women talking about their work. They also bring up how Kate’s mom is a psycho. This weird, but awesome moment between the women ends the issue.

Marieke Mijkamp did a great job with the writing! I love the progression of Kate and Susan’s relationship. The storyline started with them hating each other. Now, we see the Young Avenger looking after her now heroic and injured sister. The development was awesome! The theme of sisterhood continues as Stinger and Miss America’s appearances made it an enjoyable read too. Everyone’s involvement here made for a good story!

As for art, a lot of people deserve praise for these unique and bold illustrations. Enid Balám, Oren Junior, Roberto Poggi, Brittany Peer, and Rachelle Rosenberg all killed it! I love everything they had to offer. Especially the teamwork between Kate and Cassie. I loved that callback to when Clint Barton and Antman did the same thing decades ago. Also, a brief mention from Captain America: Civil War (2016). That was a major highlight of the issue.

The same can be said for the illusions Kate was dealing with. Hawkeye breaking the glass that carried her past adds more to her character. It shows her how far she has come. That potion of the dimension was drawn and colored so well! Nothing but beauty shows within these panels. Also with Jahnoy Lindsay’s work on the cover. It is badass! And once more shows Kate dedicated to the role as a hero.

Want to discuss things further? Hit us up on Twitter, Facebook, or Instagram. For more film, gaming, anime, and comic book content; TV news, trailers, updates and reviews, make sure to keep it locked right here at The Nerdy Basement. While you’re here, please consider supporting us on Patreon! It’s an easy way of supporting us so we can keep providing you with your Nerdy News!