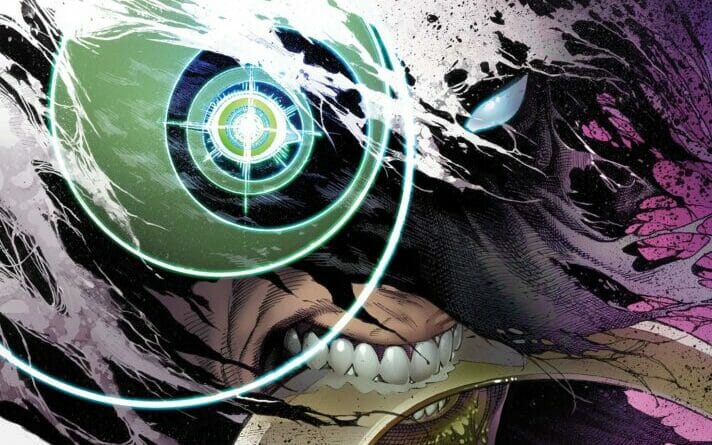 
The Fist of Khonshu has to deal with a being, capable of mind-controlling civilians!!! The question is who is behind this chaos??

Marc Spector was your average military man. While on a mission in Egypt, Spector was betrayed and killed by a member of his team. However, a spirit named Khonshu brought him back to life. They did this so that Marc can take down evil at night. Moon Knight would be born, but it wouldn’t be his only identity. Also suffering from dissociative identity disorder, he has three other identities. One of his many ones being, Mr. Knight, but he is also killing off Marc Spector.

To deal with DID, he goes to a famous therapist, Dr. Andrea Sterman. He is also operating a small business, the Midnight Mission. He uses the business to help anyone that is in his city. He also has an assistant, a vampire named Reese. In this issue, our hero will have to help a former soldier fight off mind-controlled demons. One of them is the soldier’s mother.

The issue began with the young man being attacked by the demons. Asking why they are doing this, they repeat a saying. “Because I want to sport for the hell of it.” We then cut to Mr. Knight and Reese having a conversation, as she is drinking a pint of blood. They talk about how the elderly are attack civilians. The young man then rushes into the Midnight Mission area. Reese recognizes him as he lives near her, he is referred to as “Soldier”. After asking the Soldier about his attacks, it is confirmed that the elderly jumped him. He even tells them that his mother was involved; expressing that he avoided fighting her.

The two patch up Soldier as Knight blames himself for not protecting everyone. The soldier then tells them that the elderly demons are from his apartment. He is then told to take pills, but refuses. As that happened, Reese nearly bit the victim. She even leaves in a hurry. Mr. Knight and Soldier then go to the apartment building. The soldier wants to help because his mother is involved and is retrieving his gun. They run into Hawley the janitor. Calling for his mom, the Soldier rushed by Knight to go find his piece. Outside, our hero is being cornered by elderly demons, including Hawley. He was behind all of this.

Hawley explains that he puts his sweat in the water supply to control them. He did all of this to lure Knight into this trap. They continue talking and Knight realizes that Soldier is working for Hawley. Moon Knight then challenges Hawley’s mind by drinking his sweat. He scraps some off of Hawley’s head and gets to work. Yet, Hawley is still calling bluff on Knight being able to access his mind. Suddenly, Hawley is being pulled down and confronted by a spirit resembling Moon Knight. As he shows off his “scars”, we see that the only name without a tomb is Marc.

All of a sudden, everyone breaks free from their control. Hawley is temporarily stuck in this mind world belonging to Knight. Knight then returns to Midnight Mission and sees that Reese returned. She is speaking with someone named Terry, and the latter is sent away by Knight. Reese gets an apology from Knight for having her patch-up Soldier. He did not realize that she is that much into the blood. She even tells him that he should not blame himself for the mistake.

He then explains that he too is being changed from the inside. The effects made him into something he too did not wish for. As the two make up, we see a black shadow looking over them, this is Dr. Badr. He is someone who is also under Khonshu but hates Moon Knight tactics.

Jed MacKay’s writing was really good here! Instead of just constant fighting and killing, we get to see the human sides of Knight, Reese, and Soldier. All three being under the influence of another force. I loved how Marc actually felt bad for Reese helping out the Soldier. I also like that she did not go off on him for it. Also, Soldier is a really good actor. He had myself and likely others fooled. He got me with that whole “I need to help my mom” act.

As for the art, both Alessandro Cappuccio and Rachelle Rosenberg do not disappoint. So much detail and care in every panel! I loved how Mr. Knight’s suit was glowing for the majority of the issue. My favorite panel here was him getting Hawley to stop his mind control. That was badass!!! I loved the illustrations and story in general.