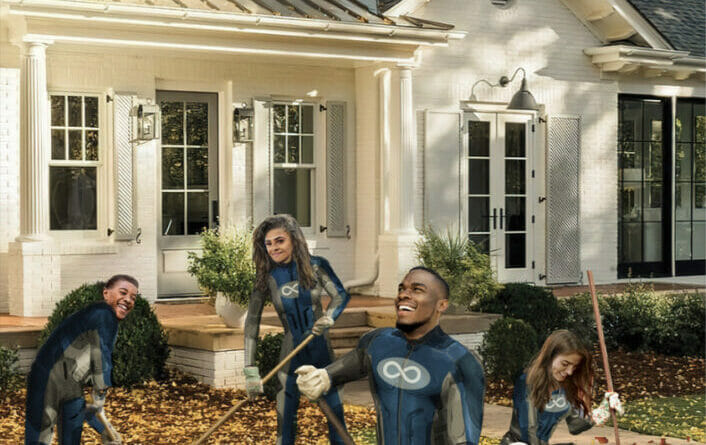 The Joneses is AWA Upshot’s newest release. Creators Michael Moreci and Alessandro Vitti have developed a captivating world full of exciting characters and visuals. Paralleling the COVID pandemic, Moreci has created a world where a similar disaster called The Great Death has sparked an emergence of people with superpowers known as Reborns. The Joneses #1 is an intriguing introduction to the world.

The story is told mostly from the perspective of the four members of The Jones family. A charming family of four in this new-normal world. As they navigate their day-to-day lives of school and work, they also find themselves in a moral dilemma. With a world echoing our own, the community is divisive and looking for someone to blame for The Great Death, and the Reborns are on the chopping block. And as we find out, each member of The Jones family possesses a unique ability of their own.

As tensions rise within the family dynamic—bullying, a matriarch with uncontrollable powers, a speedster daughter vigilante, or a father just trying to do the right thing—supervillains are also rising to power. This provides another layer to the storyline: how can The Joneses hide in plain sight yet battle villains to keep their segregationist community safe?

The coloring and line work are outstanding. Vitti sidelines Moreci’s work brilliantly by bringing out the tone of each scene through facial expressions and detailed landscapes, as well as color schemes depending on the emotions within. But it is in the action sequences where Vitti’s work really pops. The frantic nature of super speed or the horrific demonic portalling or the lines matching an uncontrollable electric explosion are placed perfectly on the page to exude and communicate a sense of power. Without Vitti’s work here, the comic would suffer.

Because some of the main factors of the story (i.e. a pandemic with erratic communities) match our current real-life, Moreci enables us to settle into the comic quickly and provides time to establish strong characters. This might also be helped by some familiar comic tropes such as regular people hating the super-powered. I immediately got big X-men or MCU Sokovia Accords vibes. There are even some lines that echo Spider-Man’s great responsibility mantra.

Overall, The Joneses is a great beginning to a potentially well-crafted and in-depth look at life in the wake of a worldwide catastrophe. It’s hard not to notice the parallels so I see it as a quality superhero story with undertones of a satirical “what if”. I hope we see some storylines that don’t match others we’ve seen before in superhero media. I have faith in Moreci and AWA to produce a solid 5-issue story. Step into a familiar world, with familiar family dynamics, but a strong punch of personality.