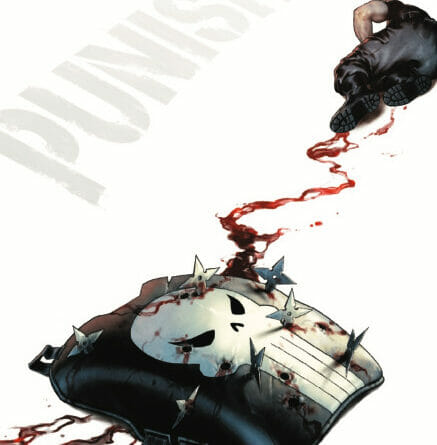 The Punisher #2: The King of Killers (Marvel Comics Review)


How did The Punisher become the Hand’s newest leader?! Who is after him?! What is the endgame for the long-lasting organization?!

Frank Castle The Punisher is possibly on his strangest, yet most interesting journey in his mythos. First, he was confronted by the cult, which was a test. Next, he was tasked with and then successful in the killing of a Hand ninja. Then, the demonic beast worshipers offered the former marine a crazy position. Residing in Japan, Castle is trailing a group of warmongers. They are supplying weapons to criminals and terrorists around the world.

Yet, that is not the most insane thing going on. Due to his new role as leader of the Hand. Frank witnesses the group bringing his wife back from the dead. His kids may soon follow. Frank is finally getting the life that was ripped from him. He has adopted the title of “King of Killers” and the “Fist of the Beast”. But you can just simply call him, Lord Punisher.

The story starts with a therapist talking to a young boy. The kid has been drawing some very graphic imagery, including The Punisher’s iconic skull. While this is going on, a random narrator is detailing the actions of the young man. The narrator and therapist continue as the child is revealed to be a 12-year-old Frank Castle. The actions and words on display would eventually become Castle’s future.

Years later, we see the now grown anti-hero having some quality time with his now resurrected wife. This unbelievable, yet real moment ends when The Punisher suits up. The pair briefly talk about Maria being here. She even asks when the kids will return. Frank assures her that this will be soon. After he touches his wife, he is instantly brought back to the day she was killed.

Another narrator speaks, excited and happy that Frank is now associated with the group. Instead of using his guns, he goes into a battle with an old katana. Frank struggles as he faces off against one of the Hand’s ninjas. The being assures Frank that this is not necessary, he disagrees. Frank is proving his worth. Before he continues, the mysterious being asks the ninjas about their origins. Like Frank, their murderous journeys began when they were kids. They want Frank to be motivated to serve the group well.

They continue with their lesson about the Hand’s history. This happens as Frank proceeds with his sparring match. Frank is hit with a backhand but catches the ninja’s katana with his hand. He shatters it and headbutts the ninja. After the match, Frank is brought to a hall with past masters of martial arts. The being references history’s trauma with violence. They even mention American incidences, such as slavery and shootings.

This person added that Americans were originally excluded from leading the deadly group. Yet, they changed their minds because of Frank’s work. There is a brief overview of both this being and Frank dishing out violence. Lord Punisher tells the being that only bad people will die. The deal ends if the Hand kills any innocent people and/or trains kids.

We are then brought back to his 12-year-old self. It is revealed that this being has already met Frank. He saw them as nothing more than just a creep, after offering the young man to pick between three knives recognizing Frank’s potential.

Back to the present, an Apostle soldier is at the feet of Lord Punisher. They have brought over a Banner Cannon. The Hulk if he was a gun. Once more, Frank is finding and preventing these weapons from reaching the wrong hands. To ensure this, he destroys the powerful weapon; Frank then demands to know who the soldier is working for, promising to kill him. The soldier assures him that more of these weapons are out there. Even mentioning Frank’s slain kids. Lord Punisher then brings up the Beast, the true leader of the Hand.

The Beast is now possessing Frank, as his eyes glow red. Also, he proclaims that he kneels to no one and has seen the soldier’s sins. The Apostle attempts to kill Frank, after recovering a pistol from a sewed wound. The armor protects the lord as he lunges for the soldier. Frank responds by punching him with a few ninja stars, mimicking brass knuckles.

The soldier is then taken away. Frank is stunned to realize that his would-be killer had a bomb in his chest. He orders his disciples to keep him alive to disarm it. The mysterious being tells Frank that the Eyes of the Beast gave him the knowledge. They reintroduce the knives to their leader, Frank picks one of them. As this happens, the being explains the backstory of that weapon.

Shinsuke Ishiyama crafted the weapon over 100 years ago. He has slain many with it and eventually committed suicide with it. They then bring Lord Punisher to meet the being taking over his vessel. He is told to bow before the Beast. It was this creature that was narrating in the red, while his main disciple was in the white.

We are then brought to a meeting between the two groups. One of them is the Apostles’ faction. They talk about the weapons. The leader of the Apostles feels disrespected when one of the opposing members talks about not needing their aid. Also for bringing up “peace”. The gang member tries to explain but is killed when he explodes from a punch. The leader then kills more members of the opposite group. The being is revealed to be Ares, the God of War, and is looking to once again live up to his name.

This was a fantastic read! I loved this from start to finish! Jason Aaron, Jesús Saiz, and Paul Azaceta’s teamwork paid off well! Seeing Frank lead the Hand threw me off at first. Let alone getting involved with them. However, this story not only made sense but showed another group of layers within the character. Seeing him become a better leader than most is cool. That detail of him ending the kids’ training said a lot. War took away his own kids from him. Breaking traditions is why Frank is such a badass character. Also, this mysterious being carried the dialogue.

Especially in the beginning and when Frank was sparing. I also enjoyed how they used American tragedies as an analogy for what the Hand is doing. The real-life element did a lot here. This story gets bolder and bolder as you get ready for what is to come. Ares’ involvement is weird but should serve to further enhance the story. Finally, I have a theory of how the story’s eventual conclusion will impact Frank moving forward.

He will have to fight the Daredevils Matt Murdock and Elektra. Both wrapped up the fight with Fisk in Devil’s Reign. The ending is them looking to dismantle the Hand. Also, in the past, Matt himself was controlled by Beast. Ares is not only after Frank, but the Beast too. The writing is on the walls.

As for the art, Dave Stewart did a great job too! The differing art styles from Frank’s past and present were unique and creative. Speaking of his past, the doodles were a great source of foreshadowing. Even deeper than that, how the original logo is sadly seen as a symbol of hate nowadays. All this negativity is on a symbol that has no real ties to white supremacy. More layers with simple art. Continuing in the past, I also love seeing Frank in a Captain America t-shirt. The Punisher is a huge fan of Steve Rogers.

This nod was clever and a great source of “inspiration” for the King of Killers. The same goes for drawings of guns and toy soldiers. Finally, the small detail in the therapist, the brain behind Frank. I guess the theme of the story is foreshadowing. Especially with their mindset of Frank before and after the Hand being on a different level. As for the present, this is the best art I have seen for The Punisher. I am a sucker for his new suit. The logo and new choice in the weapon; are not as iconic as his guns, but it grows on you. Plus, I do not see these elements being permanent.

Next, the scarring on Frank and his wife brings more attention to detail. Along with Maria’s scars, she mentions her late kids and we see Frank briefly recapping her death. I’m so grateful to see his PTSD and the couple’s scars not being abandoned. The art does a great job of telling its own story with simple elements! To add to that pain, we have the red in Frank’s eyes. Both he and the Beast see blood. This is for better or worse for both characters. Along with it being an interesting and simple dynamic.

Not to mention, the issue’s cover. This beautiful work of art was done by Jesús Saiz. It shows the journey Frank has endured to get to this point. The displaying of his struggle again details what he will do to get his life back. Also, if you think about it, the weapons that cut the vest represent Frank’s past and present. Instead of being hurt by and using bullets, he is being attacked with and using ninja stars. If everyone continues their hard work, this can reach the same heights as Devil’s Reign.