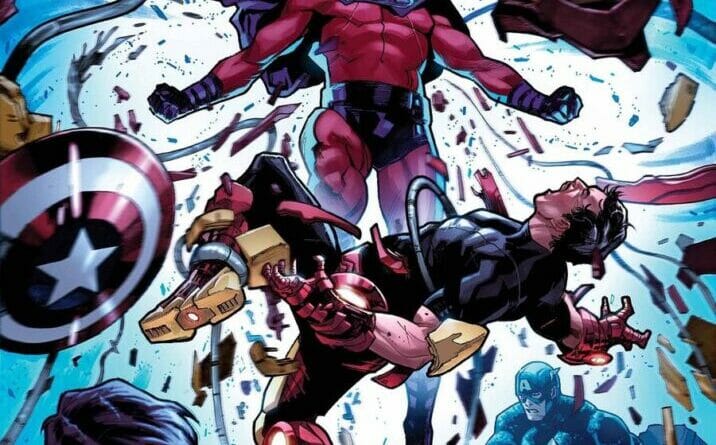 The Trial of Magneto #2 Review


Magneto is in hot water for the death of his daughter, Scarlet Witch. Her homicide brings him into direct conflict with the X-Men and The Avengers!

The X-Men’s greatest foe, Magneto is on trial for Wanda Maximoff’s murder. All evidence points to him being her killer. Despite this, he is begging the Quiet Council to bring her back. This becomes a bigger mess as the X-Factor and X-Men fight over leading the investigation. Even worse, Wanda’s pasts sins are making everything complicated. Now, the Avengers have arrived at Krakoa, the mutant’s new hideout. They show up to collect Wanda’s body. Yet, the X-Factor is trying to figure out what truly happened to her. Let’s find out if Magneto was truly behind the killing.

Erik is reading in his home. He is then interrupted by a similar presence. Charles is somewhere near Erik as the latter is asking if he’s being watched. Suddenly, Erik finds that he is being watched by Hope Summers. It turns out that Charles and Hope are forcing the truth out of Magneto. Of course, the goal being that they learn whether or not Magneto killed his daughter. This is not a smooth process as the two briefly conflict about these actions.

Hope then asks for Jean Grey and/or Emma Frost to takeover. However, the two are busy with “an urgent matter of diplomacy”, according to Charles. Wolverine, Cyclops, and Jean greet Krakoa’s first guests. Captain America, Iron Man, Vision, and Wasp of the Avengers show up. After Jean gives her condolences to Vision, Earth’s mightiest heroes are given a tour.

The X-Men show the Avengers around the aquarium reserve for certain mutants. Meanwhile, Jean and Polaris talk about the resurrection. Emma Frost then greets the heroes. This happens while Tony tries flirting with Frost. Elsewhere, Northstar, Dakan, and Prestige talk about the missing Cerebro helmet. They too also discuss the resurrection. We then see Wanda talking about her murder. She is not sure who killed her. The only thing she knows is the darkness that came right after. Hope then wakes up Erik and tells him to keep quiet about the whereabouts of Wanda’s body.

We then see Cap talking with Northstar about the latter’s husband, Kyle. Off in the distance, Quicksilver talks about his sister’s murder bring them together. Cap disagrees and tells him that it is her memory that brings them together. Northstar then consoles the speedster. Shortly after, Pietro is attacked. Prestige and Jean put up shields to protect all of the heroes. Magneto is behind the attack. He wants to drive the Avengers out of Krakoa. Iron Man plans to fight outside. He plans with Cyclops, then Polaris contributes. She goes head-to-head with her father to give the heroes time. Cyclops then blasts Magneto. X-Factor and the Avengers attempt to fight off Magneto. He then takes out the Avengers.

He then takes Kyle hostage. Northstar freaks out and begs the Avengers to leave. Cap tries talking down Magneto. Then, Magneto proclaims that he murdered Wanda. He is begging Cap to take him to jail. Yet, something ended up happening. Wanda was resurrected. Mystique watched in the distance as the Scarlet Witch returned. Vision is then greeted with a kiss by his love.

This was not a bad story. Leah Williams’s storytelling is pretty good here. I loved Captain America’s word to the grieving Quicksilver. I also enjoyed the craziness of Magneto, especially towards the end. Even the argument between Charles and Hope was cool too. The discussion of what is right and wrong, while looking after Magneto. However, Wanda’s resurrection was a little redundant. We know she was going to come back, but I did not think it would be this soon. Yet, there could be something deeper with this moment.

As for the art, Lucas Werneck and Edgar Delgado killed it!!! From the one-shots of Wanda to the fight, it was enjoyable art. I love the art of Karkoa. I feel like there is a deeper meaning behind that place. The mutants have faced so much. From discrimination to loss and they succeed in the end. They are reward with such a beautiful place they can call home.