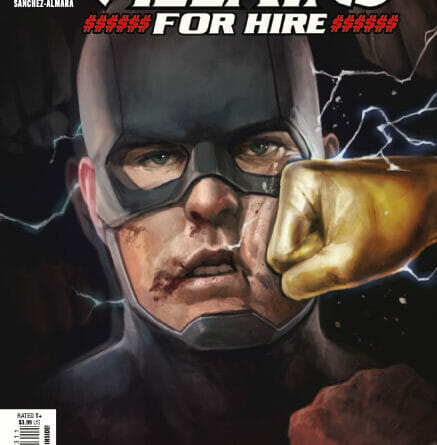 
John Walker aka the U.S. Agent wants to be the hero. Yet, he will have to settle for being a Villains For Hire.

With the ongoing Devil’s Reign storyline, Mayor Fisk is looking to retain his power. Not just over the heroes and remaining opposers, but also New York City. One way he is achieving this is by having the Thunderbolts do his dirty work. The Villains for Hire tie-in focuses on U.S. Agent doing a job. However, he is a double agent, no pun intended, working with the D.A. to stop his employer.

This revelation backfires on the former Captain America as one of his teammates was attacked. Also, causing mayhem within civilians. The preparator responsible is a new villain, Conviction. Let’s take a look at the aftermath of the incident. Along with how the U.S. Agent still follows orders from the man he is trying to stop.

Walker is distraught as a civilian awakens from the event. He and his team, consisting of Rhino, Whiplash, Taskmaster, Agony, and Electro were forced to attack the bystanders. This was due to some of them being controlled by Conviction. Electro was also under mind-control and is unconscious. Walker orders Rhino to get Electro out of there. Also, the remainder of the team leaves under his order. During this and Ironically, civilians are exposing the deputized team as the villains.

Desperate for answers, Walker is trying to find who was responsible for what happened. He then goes to Fisk and tells him to help out. Despite this cry for help, Fisk blames this on his team. Even ordering Walker to clean the mess up. We then see U.S. Agent help the firefighters and civilians.

Agony then reappears to help her colleague, saving a young woman. Meanwhile, Conviction brainwashes a few firemen. U.S. Agent tasks Agony with stopping the villain, while he knocks out those under control. Walker is successful but then sees Agony is about to turn. He saves her, but U.S. Agent is now being controlled.

Before this, Agony was able to reverse the mind-control. This was while Conviction explained that Fisk experimented on her at Ravencroft. She inadvertently gained her abilities because of Purple Man. Conviction then leaves Agony with a corrupt U.S. Agent. She would once more filter the ability off of someone.

Back at Fisk’s base, Walker confronts Fisk over what happened. Fisk ignores him and assigns the team with the mission of retrieving the Purple Man’s kids. Rhino then quits, due to this assignment dealing with endangering kids. Walker once more is persistent. This then leads Fisk to mind-control him with Purple Man’s powers. U.S. Agent is on board again and Abomination is revealed as the team’s new muscle.

Fisk is eager to get these kids. This is so that he can win his election against Luke Cage. He also said that Walker was always a puppet. With or without mind-control, Fisk is right! The team is closing in on the kids, as Conviction looks on.

We are once more greeted to the first several pages of the Devil’s Reign fifth issue. Walker confronts one of the kids, as Electro knocks some of them out. Abomination then comes crashing into the hideout. Agony, Taskmaster, and Whiplash corner and kidnap the kids. One of them realizes that Walker is under mind-control. As the villains step out with the mission completed, they are confronted by the Champions and Jessica Jones.

Clay McLeod Chapman’s writing added more greatness to this story. Villains for Hire alone is great! Yet, these events being associated with Devil’s Reign was beautiful! I liked how much it centered around John Walker, without giving him all of the spotlights. Seeing him being conflicted with the good and bad really made me empathize with him. Sadly, Fisk was right about him being a punching bag.

No matter how hard he tries, he cannot do what he wants. He was so close before Fisk used Purple Man’s powers on him. He is reliable to his employers, but not to himself. I loved what they did with this character! I want to see him somehow stop Fisk in the future!

As for the art, it too was great! Manuel Garcia, Lorenzo Ruggiero, and Dono Sánchez-Almara absolutely killed it! I loved the literal dark tone in the open pages. Seeing John under control the first time was scary. It also served as a foreshadowing and memory of what the character has gone through. I also enjoyed how the different art styles still told the same story as Devil’s Reign’s last issue.

The full circle idea was perfect! Once more, seeing John do anything was awesome. The close-ups of his distress and his actions told a great and almost told many different stories. Even though this was a story for the Thunderbolts, this was mainly for John Walker.

Finally, the cover is bold and iconic! Skan did a great job on this illustration. It showed what to expect for the Villain for Hire. Also, a great reference to Nobody (2021). A film that also looks at someone fighting for good, while other people see it as nothing. This was a really cool easter egg! Additionally, the film will celebrate a year of release this week too.