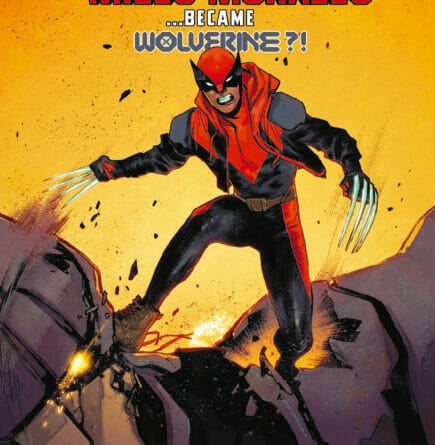 
Miles Morales is recognized by most as Spider-Man. However, What If he traded in his youth and innocence for years of trauma? What if the young hero became The Wolverine?

This is a continuation of the current What If storyline for Miles. In the previous issue, we explored a reality where he became Captain America. He is as you expect Steve Rogers to be. The same can be said about him also being like Logan. Speaking of, his story is essentially the same as the original. Yet, there are a few slight differences. Not only does the story mirror Logan’s, but may or may not be just as tragic. With all that being said, we explore one hell of a possibility. Let’s now ponder the question, What If…?

We start in Atlanta, Georgia. The year is 1981. Black kids are missing. This crisis is highlighted on the news, faces on milk cartons and flyers, but there are no answers to this issue. Miles is listening to the news, but he is dealing with his own crisis. His X-gene is activating and he is worried. He tries to get his parent’s attention. Despite the cry for help, they neglect him and continue their affairs. He was even screamed at by his father, who refused to help Uncle Aaron.

The young boy then steps out, still puzzled by the claws in his hands. The boy is then abducted, becoming yet another missing child. Over 40 years later, Miles is in Wisconsin. He is being ambushed by Sentinels while looking at his missing flyers. He is wanted for the murder of a senator. Without thinking twice, the young anti-hero stops the bots.

Above Miles and the slain bots, a Helicarrier is present. Director Malcolm Colcord is speaking with his top soldier, Agent J. Colcord is responsible for the Weapon X program in both this and original realities. As for his top recruit, they are this world’s Silver Samurai. The pair talk about the violent nature of the monster Colcord created. The senator that was killed earlier had his family join him in the afterlife, courtesy of Miles.

Once more, he is confronted, but by Agent J. The two go head-to-head. Attempting to cut his armor, that only leaves Miles’ claws broken. The agent continues his assault on Weapon X. He even stabs him with his adamantium sword. A jab then knocks over Miles as his torn mask reveals his identity. This victory by the agent can not be celebrated as he uncovers the truth.

Agent J is revealed to be an older Jefferson and he just beat his son. Miles is still conscious and blames his father for this mess. A distraught Jefferson cannot respond, only talking about the past. He reveals that both he and Rio divorced after their son’s kidnapping. The strain also caused Jeff to become S.H.I.E.L.D.’s greatest weapon. Or so he thinks.

Director Colcord then interprets the heartbreaking reunion. He speaks with the defeated Miles as the mutant remembers his experiments. Also, the eventual escape and revenge on Colcord. Weapon X scarred Colcord physically and personally. His family life and his face were collateral for the trauma he put Miles through.

Using fire against fire, Colcord uses another weapon against the father and son. It is Sabertooth, but with Uncle Aaron as the beast. He was tasked with killing his nephew. Aaron is still angry about Jeff not saving him from prison. Before he kills Miles, Jeff saves him. The fight ends quickly as Jeff is cut open by his brother. Miles heals from his wounds, regenerates his bone claws, and stabs his uncle.

He is about to use the sword to decapitate Aaron, but Jeff pleads with his son to drop it. He explains that the past has destroyed their family. Fighting will only make matters worse. Miles then tends to his injured father. Jeff is about to die. He is at least thankful that he got to see his son alive again. Before dying, he also asks his son to find Rio and apologize on his behalf.

Shortly after his father’s death, Miles properly buries him. Director Colcord then threatens to stop Miles once and for all. Miles simulates that he will cut him again. Out of the blue, someone calls for Miles. It is Ganke Lee, who is Professor X in reality. He is joined by his X-Men, Storm, Nightcrawler, Shadowcat, Bishop, Colossus, Hope Summers, Dust, Beast, Jubilee, and Magik. We already know how this ends.

This story was very emotional. This was another great take on Miles Morales! John Ridley did a fantastic job with the writing! Starting the story with missing black kids was bold. Especially as the story uncovers what happens to them. Showing this unseen form of racism was a nice way to bring attention to this problem. Also, the fact that mutants are oppressed shows off a lot of similarities. Next, the theme of family is what makes this story so important.

Miles’ parents neglecting him causes all of this. This mess then leads to Jeff’s and Rio’s divorce. Miles’ selfish uncle believed that he was wronged by the family, specifically his brother. Both Aaron and Miles became beasts because of their family’s actions. Not to mention, Colcord lost his family because of what he did to Miles. The fighting within Miles’ family. This is the cycle repeating itself, but worse. Seeing Jeff as the Silver Samurai was something I did not expect.

One great plot twist! The same goes for Uncle Aaron’s fate. Finally, the X-Men brief, but impactful appearance. Eventually, they will serve as his family. The reason is that Miles is followed the first time led him down this path. Finding people that will use him properly was a great way to come full circle. I want a continuation of this Wolverine. It can be a prequel or a prologue. It does not matter, I want more!

As for the art, Farid Karami and Chris Sotomayor did a great job! The detailing of the character always matters and it shows. I love Miles’s suit! The color scheme and the fit are really good to look at. The fact that it’s a combination of Logan’s suit and Miles’ Spider-Man suit makes it even more meaningful! I also enjoyed the look of Agent J. A simple, but cool and unique design.

Also, I thought the name was a reference to Men in Black. Speaking of film references, Miles burying his father almost mirrors the ending of Logan (2017). A child burying their father after all this heartbreak. Aside from the characters’ designs, I also enjoyed the fights and reveals. These illustrations deserve a lot of praise. As for the cover, Sara Pichelli and Nolan Woodard did a fine job too. It reminds you of Logan, as it should. It is simple and does not do too much. I also like how that photo is also used in the issue’s description.