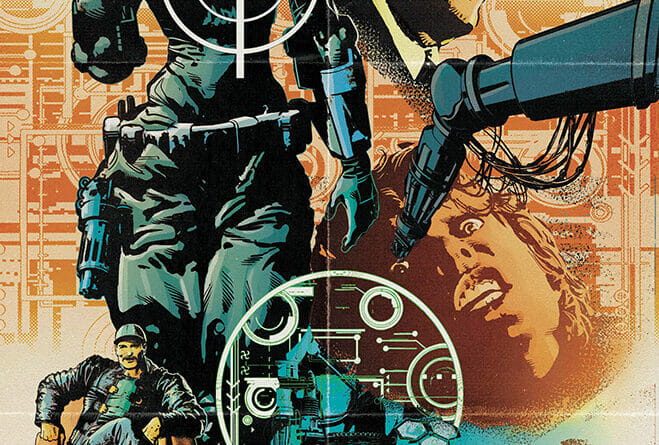 ABSOLUTION is an action, science fiction comic set in the near future. Nina Ryan was a hired killer who brought nothing but pain and suffering to the world. Now, she has a month to prove that she can change and make up for her crimes by killing the world’s worst criminals – all live-streamed for the world to see. Freedom is the prize while failure will set off the bombs implanted in her brain.

“Some stories grab you and demand to be told,” said Peter Milligan, creator & writer of ABSOLUTION. “The idea of a brutally modern way to expiate yourself of your ‘sins’ had never seemed more relevant. And with its amazing team, AWA was the only place I wanted this story to be.”

By setting this series in the near future and implementing the streaming aspect, Milligan and Deodato will tap into the cultural phenomena of YouTube, Twitch, Facebook Live, Fortnite, and more and our voyeuristic obsession with watching others’ lives unfold. This opens the conversation up to culturally relevant themes and satire in addition to edge-of-your-seat action.

“Peter Milligan and Mike Deodato Jr. are two of the best in the field and they play to each other’s strengths,” said Axel Alonso, comic book creator and Chief Creative Officer of AWA Studios. “Peter writes great action set pieces that give artists a chance to showcase their style. Mike draws inner emotion, a hallmark of Peter’s work, into the faces and body language of his characters.”