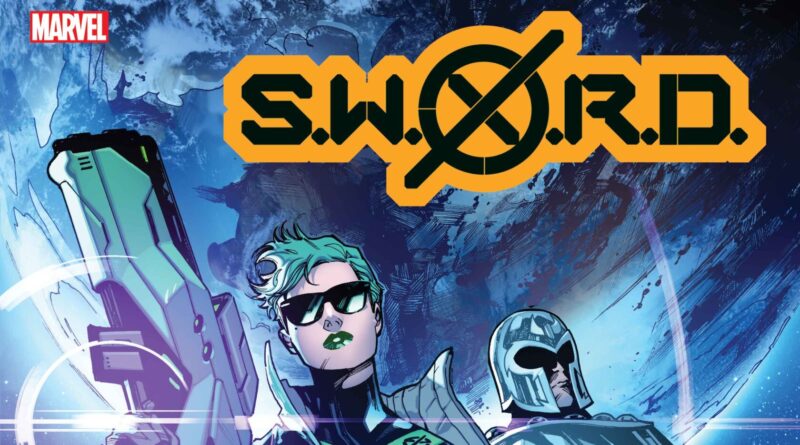 AL EWING TAKES MUTANTKIND BEYOND THE STARS IN S.W.O.R.D. #1


The new X-Men title by Al Ewing and Valerio Schiti arrives in S.W.O.R.D. #1 this December

ONE GIANT LEAP FOR MUTANTKIND! This December, writer Al Ewing (Immortal Hulk) and artist Valerio Schiti (Empyre) bring fans the newest X-Men title, S.W.O.R.D.! In last year’s groundbreaking HOUSE OF X, the mutant nation of Krakoa was founded and quickly became a major force on the world stage. Now, Jonathan Hickman’s grand new vision for mutantkind continues as the X-Men look to do for the galaxy what Krakoa did for the planet.

In the startling aftermath of X OF SWORDS, mutantkind will take the bold next step in claiming their destiny by relaunching the Sentient World Observation & Response Directorate to deal with all things extra-terrestrial on behalf of Earth. The events of S.W.O.R.D. will have a tremendous impact not only on the X-Men’s world, but the Marvel Universe as a whole, as the mutants of S.W.O.R.D. warp the cosmic landscape forever. The stellar cast includes Magneto, Abigail Brand, Cable, Frenzy, Wiz Kid, Fabian Cortez, former Avenger Manifold, and many other fan-favorite mutants who will be stepping into the spotlight in a major way.

Known for his critically acclaimed and thought-provoking work on IMMORTAL HULK, Ewing is now ready to take the X-Men where no one in the Marvel Universe has gone before.

“It’s an absolute blast to be working with the X-team, and to bring Marvel’s merry mutants into the new Age of Space – and introduce space to the new age of Krakoa!” Ewing said. “And it’s not just X-readers and space explorers who get what they want—fans of my more cosmic Marvel work will have plenty to digest as well, as mutantkind thinks even bigger and takes it even further, into realms I’m almost surprised they let me get away with. After conquering death, what’s next – and will we survive the experience?”

“I really love Al’s books, so I’m very happy to have the chance to be on his side in this new adventure. We already had the chance to work together, a few years ago on Mighty Avengers and more recently on Empyre, so now we trust each other and we can use a more ‘flexible’ working method. He can switch from full script to ‘Marvel style’ when needed, and I can change panels or layouts when I think that could work better. This is definitely one the best working partnerships I’ve ever had,” Schiti said. “I can’t say much about what S.W.O.R.D. does, but I can say that every team member will have a peculiar role to play. That’s why I designed their uniforms with technical clothing, urban outfits, and even ceremonial uniforms: every role needed a different reference and a different starting point. The space outfits are inspired by trekking or hiking clothes, far from the typical space suit because these characters are explorers, not astronauts.”

Head over to Marvel.com for more information, including a look at some of Schiti’s character design sheets, and prepare for the latest evolution in the ongoing saga of mutantkind when S.W.O.R.D. launches this December.