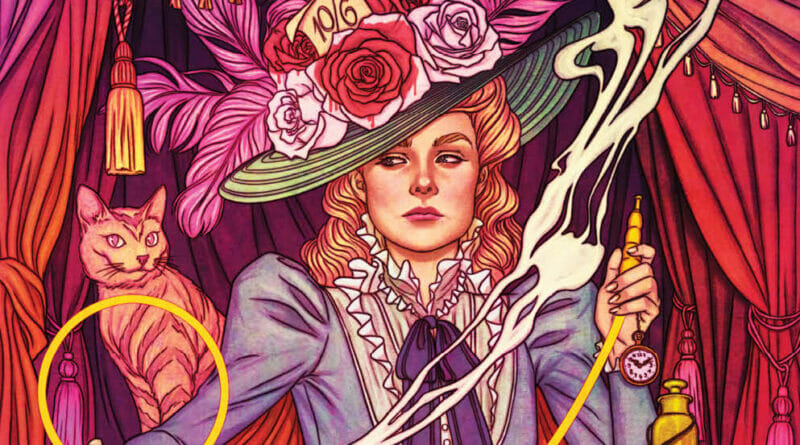 Alice Ever After #1 Review: Addicted to Wonderland in This Dark Sequel


**Warning Spoilers Ahead For Alice Ever After #1**

Addiction. It’s a terrible thing. People become addicted to many things: drugs or alcohol; gaming; sex; fitness. But what it boils down to is why? What void is the addiction filling, and what bond is being created between the addicted and the substance? Alice Ever After by BOOM! Studios looks to tell that story in a reimagined sequel to C.S. Lewis’s classic tale, Alice in Wonderland.

I absolutely love Alice in Wonderland (the book, not so much the Tim Burton films). So when I heard Dan Panosian and Giorgio Spalletta were at the helm of an original and more twisted version, I was all in. Now, if I wasn’t pulled in by the concept then the cover (also by Panosian) filled me with hopeful anticipation.

As previously mentioned, the story takes place years after the original story. Alice is now a young lady living in the home of her high-class family to whom she is a burden. Despite the titular character being loved by many in our world, she is on the outer in her own home as she is running with the wrong crowd in order to fuel a drug addiction, ie stealing and fraternizing with seedy characters.

We get a tiny glimpse of Alice returning to Wonderland via pills provided to her by the seediest of characters, Moreton. These pages, albeit few in number, are a combination of nostalgia and grime. Although familiar characters pop up (Mad Hatter, March Hare, the White Rabbit, Uilleam the dodo, Dormouse), the scenes are almost smeared with a sepia filter. I was definitely hoping for a big shift in tone once stepping foot in Wonderland. I was expecting a change from the desperate and menacing London to a technicolor and vivid environment but maybe that is to come; however, in saying that, what the scenes did was evoke pity by showing the erratic nature of Wonderland in Alice’s fragile mind.

Without going too much further into the plot, we see Alice’s family call to get her taken away but Alice has beaten them at their own game and is checking herself into the Sacred Heart Hospital for the un-well. What this will lead to is anyone’s guess. What I am anticipating is that by entering the hospital, she will be faced with a choice: accept the trauma of a cold, strange reality or return to Wonderland.

The artwork is superb and plays heavily on the concept of a dark, grown-up sequel. Spalletta’s detail and pencil work add an extra element to the story. For me, this is most evident in the juxtaposition of desperate London vs intricate Wonderland. Another positive of the extra detail is Spaletta’s way of using visuals to enable the close-ups (whether facial expressions, a stab wound, or a passed-out Alice) to be elegantly expressed through familiar yet subtle designs. The lettering gives a touch of Olde England to provide a sense of time and place. All-in-all, a very tight-knit affair in the visual department.

A minor touch that I appreciated was the story being narrated by Alice’s two cats, Kitty and Snowdrop. They are somewhat omniscient and are privy to every aspect of Alice’s life and it starts to play with your own concepts of reality within the story. Is Alice conceptualizing and conveying her consciousness through the cats, or is it a nice little add-on by the creators? Either way, it’s a nice play.

As I finished the first of five issues, I was intrigued and left wanting more. I can’t wait to get back to Wonderland and I will be thinking about it until Issue #2, somewhat joining Alice in that journey. Her life was cast asunder by the fantastical and surreal nature of Wonderland and Alice is a covetous woman clawing to get that feeling back. Is she wanting to fill the void and recapture the feeling Wonderland gave her or is it like many theorists have pondered over the years—was Wonderland just a drug-filled adventure to begin with?

Alice Ever After #1 is out now!