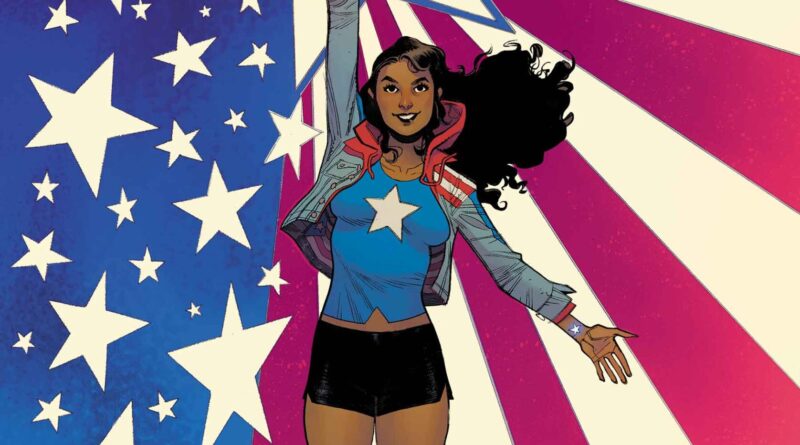 America Chavez: Made in the USA #1 (Review)


Born with limitless power, America Chavez is ready to honor several people. These individuals being her family and an audience that can relate to her.

Heroes come and go in comics and media that portray them. This is evident in writers creating a new team, with new characters. One person important to this change in Marvel Comics stories today is America Chavez aka Miss America. The Young Avenger is a Latina and LGBTQ+ hero honoring her late mothers, that gave their lives to save their dimension and young daughter.

A former resident in the Utopian Parallel, America Chavez is found by a Puerto Rican family. They bring her in and treat her as their own. Eventually, she leaves and follows in the footsteps of her mother. However, the danger she faces will bring her back to her family, not for a reunion, but to protect them.

A family is enjoying the beautiful night sky in Jones Beach, New York. The young boy sees that a body has washed up on-shore and calls for his parents. We then jump to the West Coast, thirteen years later. America Chavez is laying the smackdown on a mutated mole. She is alone as Kate Bishop aka Hawkeye helps out her partner. As the fight continues, civilians witness the heroes attempting to tame the beast.

The pair are briefly interrupted by a fan recording the fight for her school news channel. She asks America Chavez questions as the hero is still fighting. America Chavez urges the fan to find a safe place for cover, but she won’t leave. The fan asks Miss America about her missing her family. She isn’t talking about her parents; she means the Santanas.

As you might have guessed, this is the family that saved America Chavez when she was a young girl. We go back to that night, where the family sees a wounded child. It looks as if she was fighting alongside her mothers. Javier, Ceci, and Alberto Santana bring the girl to their home. They do this out of empathy for the young America Chavez. After, we jump back into the present where America Chavez and Hawkeye talk about the fan and moles.

There is even mention of Hydra. However, the pair are distracted by another group of moles. Eventually, Romane Watts aka Alloy joins the fight. The power couple of America Chavez and Romane Watts tag-team on the moles. They also talk about meeting Watts’s family. Yet, during the course of the fight, Chavez falls and is out for the count. We jump back to the past, with the setting being an apartment complex in Washington Heights. Javier gives Chavez a bed and consoles her.

After leaving her room, Javier talks with his wife and son. He is proud of their son, Alberto’s actions. They also have to pretend that America Chavez is a relative from San Juan. The hero wakes up after the battle with Watts at her side. Alloy assures her girlfriend that the moles were taken care of. Then she brings up Chavez falling, with Chavez storming out of the room.

Now on the roof, Chavez tests to see if her powers are working. This is while Alloy is trying to get answers out of her. Chavez then comes clean about her powers acting up. As the two are talking they are interrupted by a message from Chavez’s phone. Her old neighborhood is in trouble, with a force field covering it. Miss America falls to the east coast to deal with the threat.

Once again, we jump to the past. Alberto officially introduces himself and he too consoles her. He even hands her a stuffed hippo named Juanchiz. Back in the present, she has made it to Washington Heights. However, while in the air, she falls in a pile of trash. She is then helped by Spider-Man. The two work together with Parker on evacuation and Chavez on opening the force field. After punching a star-shaped hole in the device, she finds that her home is on fire.

Her family is still alive, but Chavez needs to save them. The young hero uses a water tank to douse the fire. Unbonuced to her, a hooded figure is watching over her. She is reunited with the Santanas. Javier, Ceci, Alberto, JJ, and a young woman. The family uses the fire escape to leave the complex. Then, Ceci hands Chavez a note about looking after her family. The issue ends with a hero worried.

Kalinda Vazquez did a very nice job with the issue. The main theme of the story is family. Vazquez shows us that the young America Chavez has always had someone behind her. She is a powerful hero because of her mothers. The family that takes her in treats her like their own, the first day in. They most likely give her hope to fight injustice too. That love carries over; she flies through America to save them. She even has a supportive girlfriend in Alloy! Not only did Watts save her, but she is also worried for her partner. This is beautiful and the theme should continue to carry the series.

As for art, Carlos Gómez and Jesus Aburtov also did a nice job. With detailing being a key factor, they don’t shy away from that. Simple things like the battle panels to Chavez’s hand on the beach were some of their best work. Even the stars surrounding Chavez were beautiful to look at. There is nothing, but greatness here!