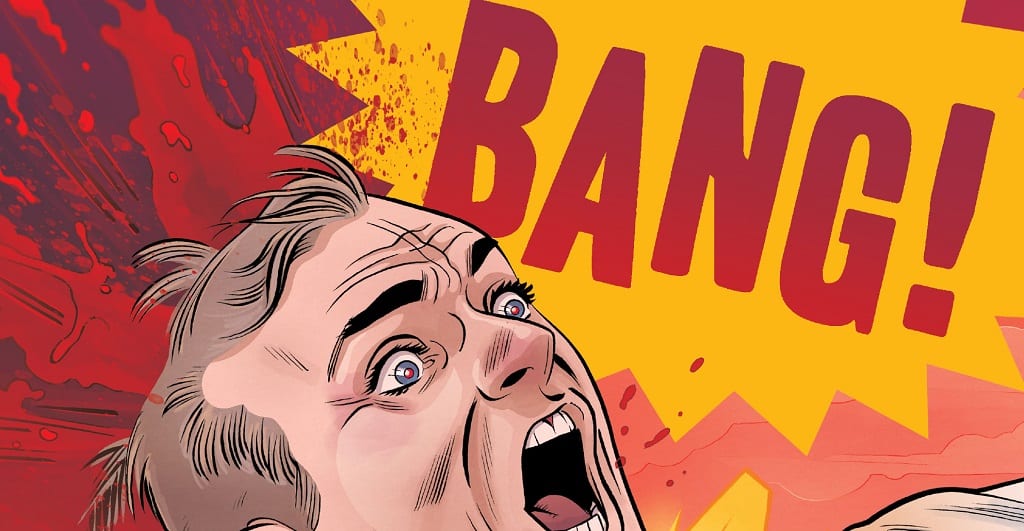 The debut issue of the hit comic book series BANG! by writer Matt Kindt (MIND MGMT), artist Wilfredo Torres (JUPITER’S CIRCLE), colorist Nayoung Kim and letterer Nate Piekos is going back to press for a third printing, featuring an all-new cover by acclaimed artist David Rubín (ETHER). The first printing of BANG! issue 1 sold out ahead of publication, following widespread press attention and endorsements from Keanu Reeves and some of the comic book industry’s most respected writers and artists. Following the sell-out of the second printing, a third printing of BANG! will go on sale from Dark Horse Comics on April 1, 2020.

“We’ve been blown away by the response to BANG!” said co-creator and artist Wilfredo Torres. “David Rubín is one of the most dynamic comic book artists working today and it’s awesome to see his take on Secret Agent Thomas Cord.”

“I was at ComicsPro meeting with some of the greatest comic book retailers in the world the week that BANG! Issue 1 went on sale,” said co-creator and writer Matt Kindt. “I sat at the round table and I mostly listened. Retailers are the key. I can put the best possible book out there, but if there isn’t a retailer carrying it, handing it to a reader, or talking about it and hand-selling it…it doesn’t matter. BANG! selling out the day of release was a huge team effort. Everyone at Dark Horse and on down the line to the local comic shop and readers. Every once in a while I find myself working on a book like this – and you can feel it – like lightning in a bottle. Great artist in Wilfredo paired with just the right kind of crazy idea…and…bang! Second printings are exciting. Third printings? Insane.”

“A great #$%^ed up blend of James Bond and Tintin.”—Keanu Reeves

“What Knives Out did for whodunits Bang! does for 007-style spy adventures by flipping sexist and culturally condescending tropes on their head.”—DEADLINE HOLLYWOOD

“Highly entertaining …. a very thrilling statement of intent from the creative team – written with a droll self-awareness by Kindt and rendered with a keen cinematic flair by Wilfred Torres and Nayoung Kim.”—NEWSARAMA

“I will literally read anything by Matt Kindt or Wilfredo Torres. Put them together and it’s magic. Skip dinner and buy this book.”—Mark Millar

“Every fan of action movies, super-spy stories, or sci-fi adventures has their favorite hero. But what if those fictional heroes came to realize they were exactly that?”—SCREENRANT

“A top secret agent, an elderly crime fiction writer who also solves crimes, members of a sprawling terrorist organization, and a drug-fueled action hero find themselves inexplicably linked to a sci-fi author whose novels could hold the key to saving all of reality…or destroying it.”—io9

“One of the most compelling new mysteries to appear on comic book store shelves in quite some time.” — COMICBOOK.COM

“In case the title doesn’t offer enough of a hint, Matt Kindt and Wilfredo Torres’ Bang! is a short, sharp shock aimed directly at the spy genre that’s relied for years on tropes and ideas popularized by James Bond more than half a century ago. Starting with a pre-credit sequence filled with derring-do, the first issue of the series quickly transitions into something more akin to Philip K. Dick writing The Prisoner with a hefty dose of Being John Malkovich in there, as well. It’s a dizzying brew, and one that will thrill all those Bond fans who’ve dreamt of reasons why Sean Connery, Roger Moore and Daniel Craig can all be Bond at the same time. Get ready for the strangest spy game out there.”—THE HOLLYWOOD REPORTER